Hi all. I wanted to ask members their opinions and experiences with traditional packs and particularly how they carry their sleep system with it.

This is a very broad subject, but I am looking for something bigger than what I currently use. ATM I am using a 2007 German Army Mountain Troops 33L Bundeswehre Gebirgsjager Rucksack (German Army Hunters backpack). I absolutely love the pack, and I have called on it to do more than it has a right too! Its a great EDC and 'overnighter' capable pack. I have taken it everywhere with me, including on interstate flights for up to 1 week! But I feel it is a bit too small and clumsy for extended winter camping trips (3-7 days).

The thing is if I carry a tent, bulky sleeping bag & sleep mat, there isn't much room for these extended trips. So I'm considering something a little bigger, but not big, maybe 40-50-65L max, or just more versatile, so I can carry more stuff externally and have the main compartment freed up for utility gear.

Should I stick with the Bundeswehre tradition and pick a modern military patrol pack, like the German Army 65L one and are they comfortable? I'm thinking about it, but I am not really a fan of zippers. I stayed away from the Australian Army one as its camo. I want something more versatile and conservative if I have to travel with it.

Some of the things I like are traditional Swiss, Swedish or German packs military packs- minimalist in their design, but strong, long lasting, reasonably comfortable (for an traditional pack) and ingeniously thought out. Although I like it, I would rather stay away from canvas however for durability, water resistance and weight reasons, but I wouldn't rule it out. Any ideas?

I have really been looking at the Swedish Army LK35. I know it has limitations as far as external pockets are concerned but I plan to use an equipment belt. I know people mod this pack, but I'm keen on keeping it original. The problem is I don't know if its large enough... I really do love the look of it though and the strap system is fantastic, it can carry virtually anything externally! I'm just not sure if its big enough, but it should be with external carry. I also don't know how comfortable it will be as I am fairly broad across the shoulders? 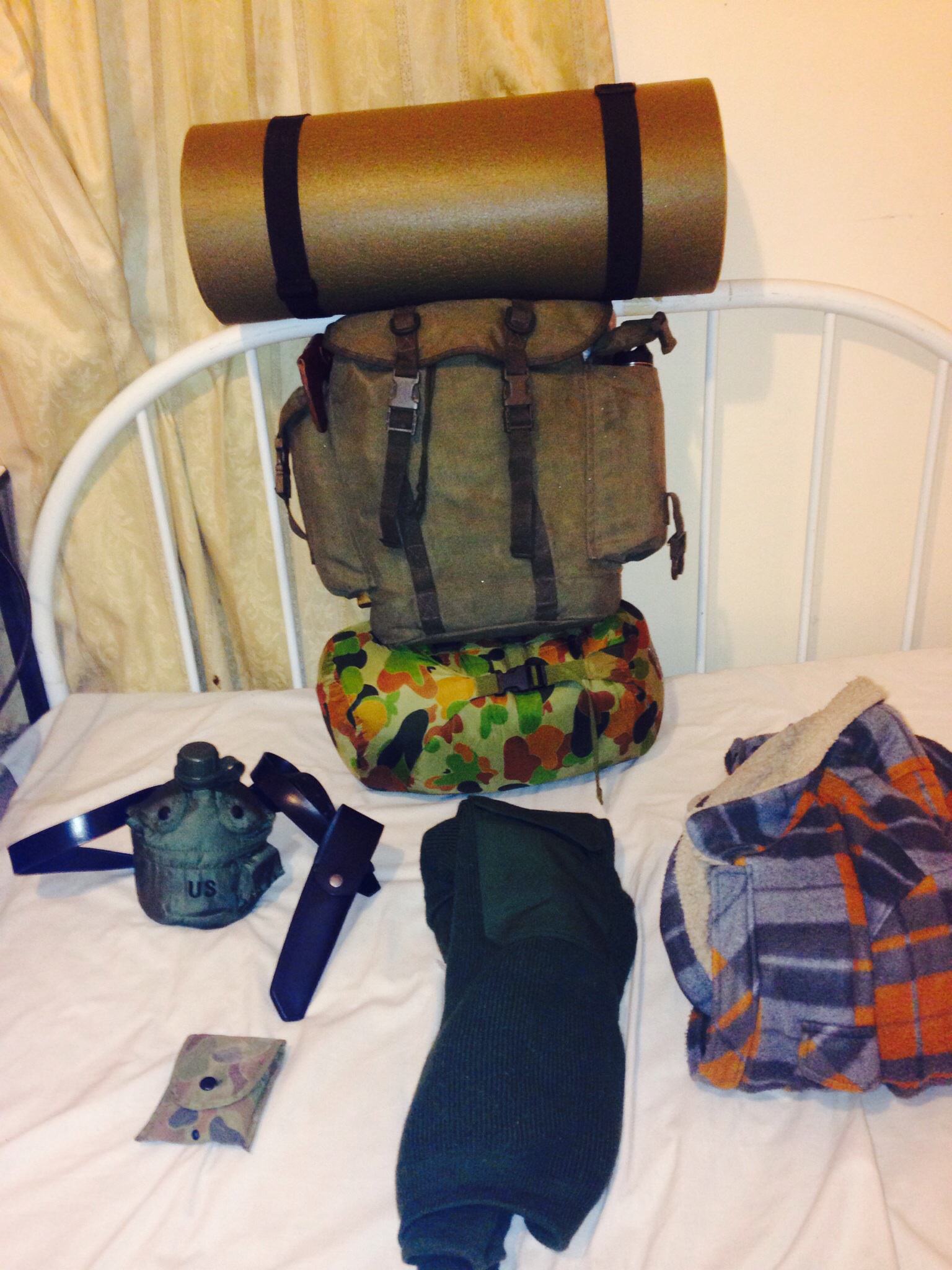 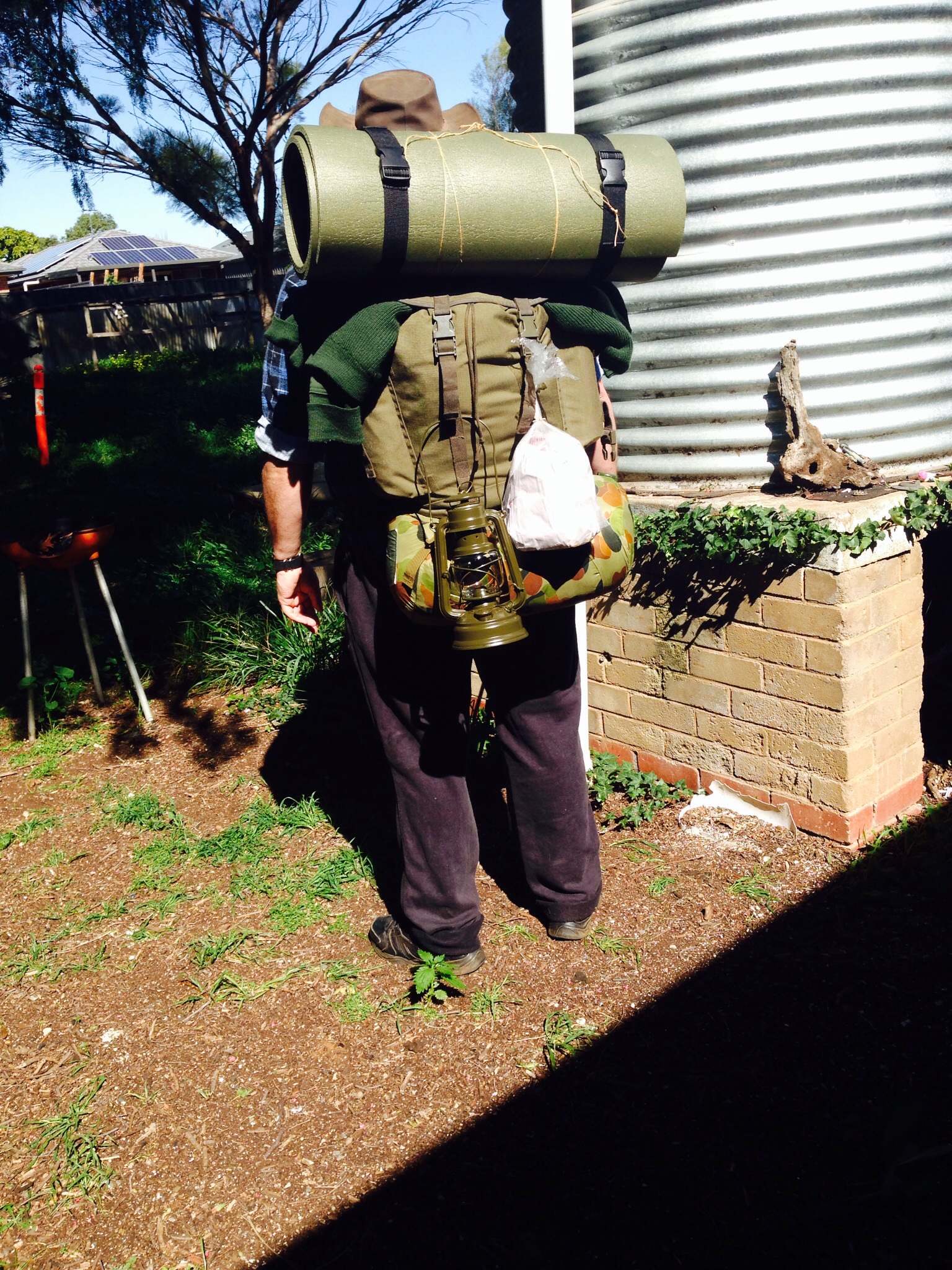 You are chasing a strange beast: traditional yet modern, ideally not canvas. Military yet conservative.

For a week in winter with water 50-65l is the size I would be looking at.

Choose your volume first.
How far will you be walking with it loaded?
No point in being miserable, so the frame would be the next thing I would consider.

My oilcloth is secured under the flap closure of my knapsack, & my blanket roll tied to the top of the carry straps. Spare moccasins are tied to the bedroll. I have been carrying this pack for many years, originally it was a haversack, but I converted it to a knapsack because it was more efficient.

My favourites as far as traditional is either the Frost River Nessmuk or Isle Royale Jr. The Isle Royale can be mounted to an Alice frame.

Thanks for the picture, Keith. Beautiful packs/ gear... From what I recall you don't carry a tent. So how many days would that pack typically last you in the bush, if you weren't hunting for food?

I noticed you even have a chest strap on that packs. I recall seeing it in you're videos, as I remember that patch/symbol on the flap. It looks similar to the US Deluth pack too me, reviewed by Dave Canterbury on YouTube. I would really like to learn more about this traditional type gear gear...
Last edited: May 24, 2019

Thrud said:
You are chasing a strange beast: traditional yet modern, ideally not canvas. Military yet conservative.

For a week in winter with water 50-65l is the size I would be looking at.

Choose your volume first.
How far will you be walking with it loaded?
No point in being miserable, so the frame would be the next thing I would consider.

I gathered that and good packs are hard to find. I have noticed in Europe some of the packs are traditional and conservative, so not very strange and beastly to them Many seemed to evolve from canvas to nylon with the times, but kept their original design. I found that rare offerings like the LK35 are conservative, and I even noticed Fjallraven who use to make military packs copied the design, although poorly, on one of their civilian packs. I agree 50-65L is the recommended 1 weeks size. But I was daring to find the sweet spot between a large and medium pack. To explain that, the pack will generally be used for 2-3 days, but I wanted something that 'could' extend to a week if necessary, if that makes sense.

Are you familiar with the LK35 pack at all?? This pack has an ingenious strap system and unlike molle you dot have to buy pouches for it to work. You can strap an enormous amount of gear to the outside of the pack and you effectively have 40L of untouched internal space. Effectively a 35L pack becomes a 100 litre pack or more! That is why they call the LK35 'the tardis', I think/ assume. The LK35 is often used as an up to 1 week pack, although technically its more of a 3 day pack. There is a bigger version called the LK70, being 70 litres, but its quite heavy.

As the LK35 pack is not too big (really 40L) people seem to be doing some long extended hikes with them. The frame on this pack is multi-universal too. I used this same pack a long time ago in extreme long distance conditions in 1988 while on boot camp, and really liked it, especially after trying to walk all day with a frame-less pack!

Canvas is nice too and I'd never rule it out, but it can be hard to find in good condition now. I also wanted to kind of match the era of my German Army pack which is also nylon. That said I really like the look of Keith's gear. I tend to like traditional stuff and military gear, but I don't know a lot about traditional gear, but I am enjoying learning about it from other members who are willing to help.
Last edited: May 24, 2019

MongooseDownUnder said:
My favourites as far as traditional is either the Frost River Nessmuk or Isle Royale Jr. The Isle Royale can be mounted to an Alice frame.
Click to expand...

Hey thanks for this. I am aware of these, but don't know much about them. Saw a review of the Frost River one once. Beautiful canvas packs with good organisation from memory... I will have another look at them.

Reading up on the LK 35 seems to be fine if you mod it (change shoulder straps, add belt, elongate frame) but as you don’t want to do that, then, for an extended and presumably heavy trip, it is not fit for purpose.

I agree that traditional conservative packs are widespread, but the other riders you mentioned in your op narrow the field somewhat...

Coolest vintage pack I have is the Trapper Nelson..

Thrud said:
Never had an LK 35, but I have a long back and don’t get on with the one size fits all external frame packs. Had a no name military external frame years ago as well as a Karrimor external frame. Never again.

Reading up on the LK 35 seems to be fine if you mod it (change shoulder straps, add belt, elongate frame) but as you don’t want to do that, then, for an extended and presumably heavy trip, it is not fit for purpose.

I agree that traditional conservative packs are widespread, but the other riders you mentioned in your op narrow the field somewhat...
Click to expand...

Interesting and thanks for the tips., Thrudy...

Some have said the LK35's straps are not suitable. I guess it depends what what you're comfort level is and what you're distance and load is too. Personally I don't know if thickly padded straps are necessarily warranted. I base this on my experience of my Veshmeshok pack and because I think surface area is important also and the LK's are quite wide and are still padded. I can only speak from my experience, however. I tended to go with what one British reviewer said about the packs straps, as opposed to some of the American ones. He said he found them OK, even after walking 2 miles up hill. In theory though thicker straps would offer more comfort and this is definitely not a state of the art hiking pack. Also as you probably know military packs sacrifice comfort for longevity and I like things that last. Even though they will probably outlast me Time will tell I guess, I'll let you know how I get on with this thing. As you mentioned its great I have t option to change them if needs be.

To clarify on mods, I think the load bearing strap on the LK35 is a great idea if it got heavy enough. Military 1st sells them and a few other place son Ebay. I just meant I'm not too keen to sewing pockets on the sides like some have. I was lucky enough to find a 1988 Hoglofs LK35 pack in new condition in Sweden! Its made from 1000D nylon, very tough. I will post pics.
Last edited: May 27, 2019

Howling Dingo said:
Coolest vintage pack I have is the Trapper Nelson..
Click to expand...

I had a look at the Nelson Trapper. It has a lot of character... Wood frame is quite elegant, unique and reminiscent of the past

Hi all. Thanks so much for all the tips on packs and showing me what you using. Some beautiful packs here.

Anyway, I settled on the 1988 Swedish Army LK35. It turned up today. Here are some un-boxing pics. Looking forward to using it this winter. I will report back how I get on with it 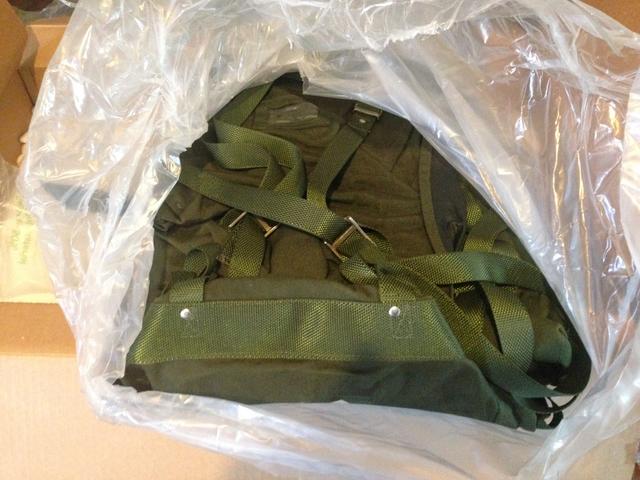 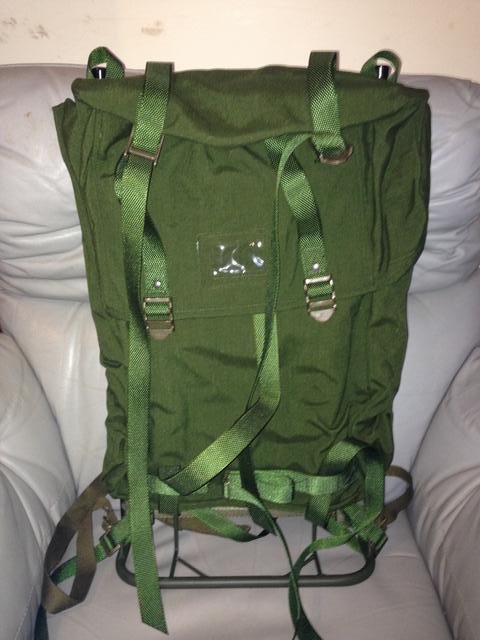