preview Zero Tolerance 0804CF
This preview review was written a while ago and was a cursory review of my (then) latest folding knife purchase, the Zero Tolerance 0804CF. When I bought this knife it was the most expensive knife I have bought ($370) and so I had very high expectations (and reservations) about this purchase.

Backstory. I recently bought my first Zero Tolerance knife (the 0801TI) and was so impressed by that knife I decided to go for a top-of-the-line ZT and see what they could deliver. One of the primary prerequisites for this purchase was that it was a model that had a blade made from one of the so called 'super steels' (so in ZT's case either CPM-20cv or CTS-204P, which are reportedly equivalent to M390 in composition and performance, with M390 becoming my benchmark for 'super steels' and being my favourite folding knife steel) and I was looking at two models, the 0920 and 0562CF, both were around the same price (about $315-$320 shipped from KnifeMad on ABF), so I started my research and began watching YouTube reviews. Looking at the vids and making some assessments (The 0920 looked great and ticked most of the boxes for me, but I was concerned with its size, making me think I probably would only carry it around the house, and there is just something about the blade shape that puts me off a bit. So I started to look at the 0562CF and again, while the overall looks of the model were great it doesn't have jimping on the flipper tab [a deal breaker for me for flippers I intend to EDC] and it didn't have a lanyard hole, and again, a deal breaker for knives I intend to EDC on a regular basis) so I started looking at other models, finally settling on the 0804CF It had everything I was looking for, jimping on the flipper, a lanyard hole and a blade made from a super steel so I dropped the hammer and asked KnifeMad to get me one in. This is what turned up. 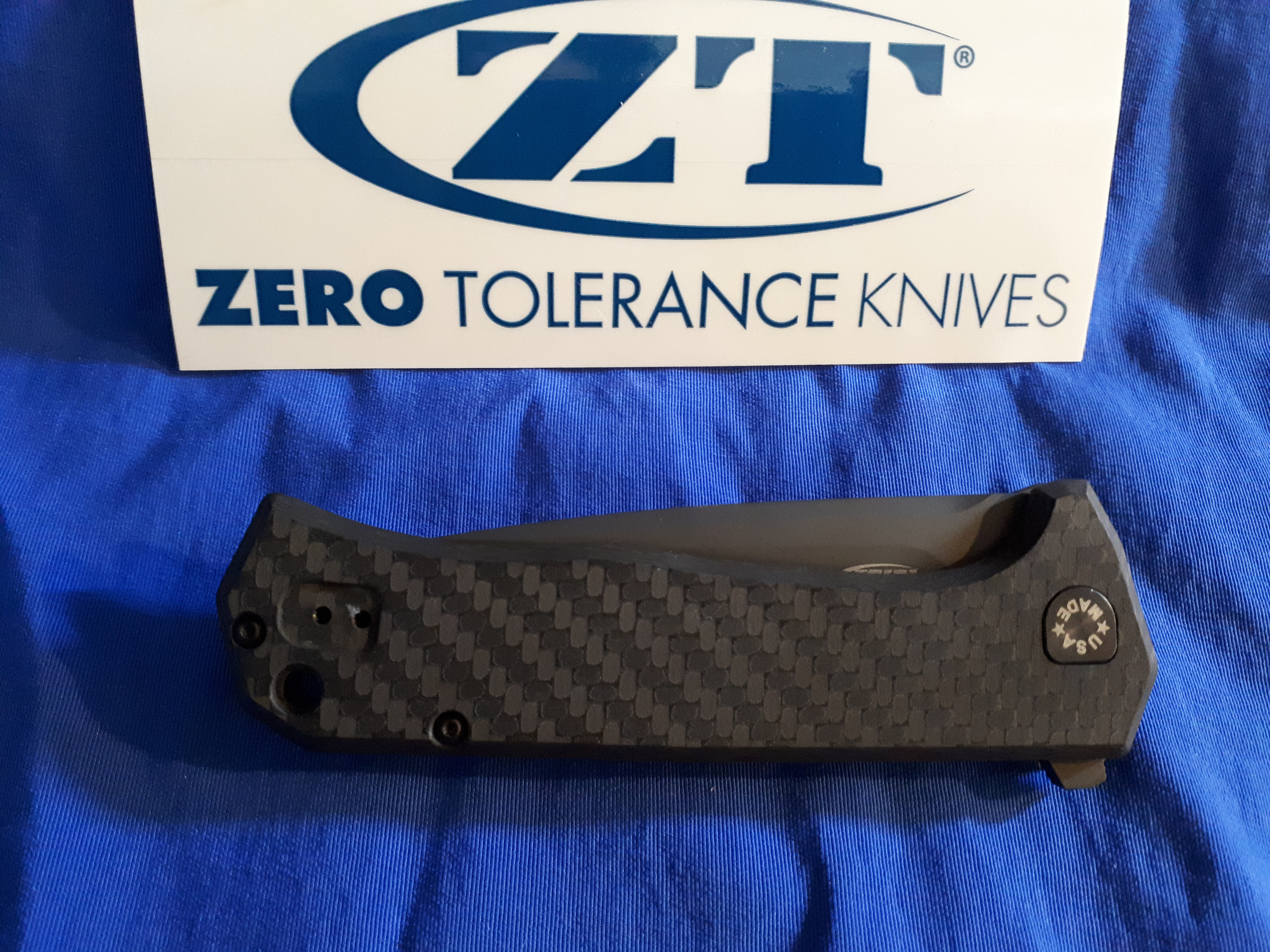 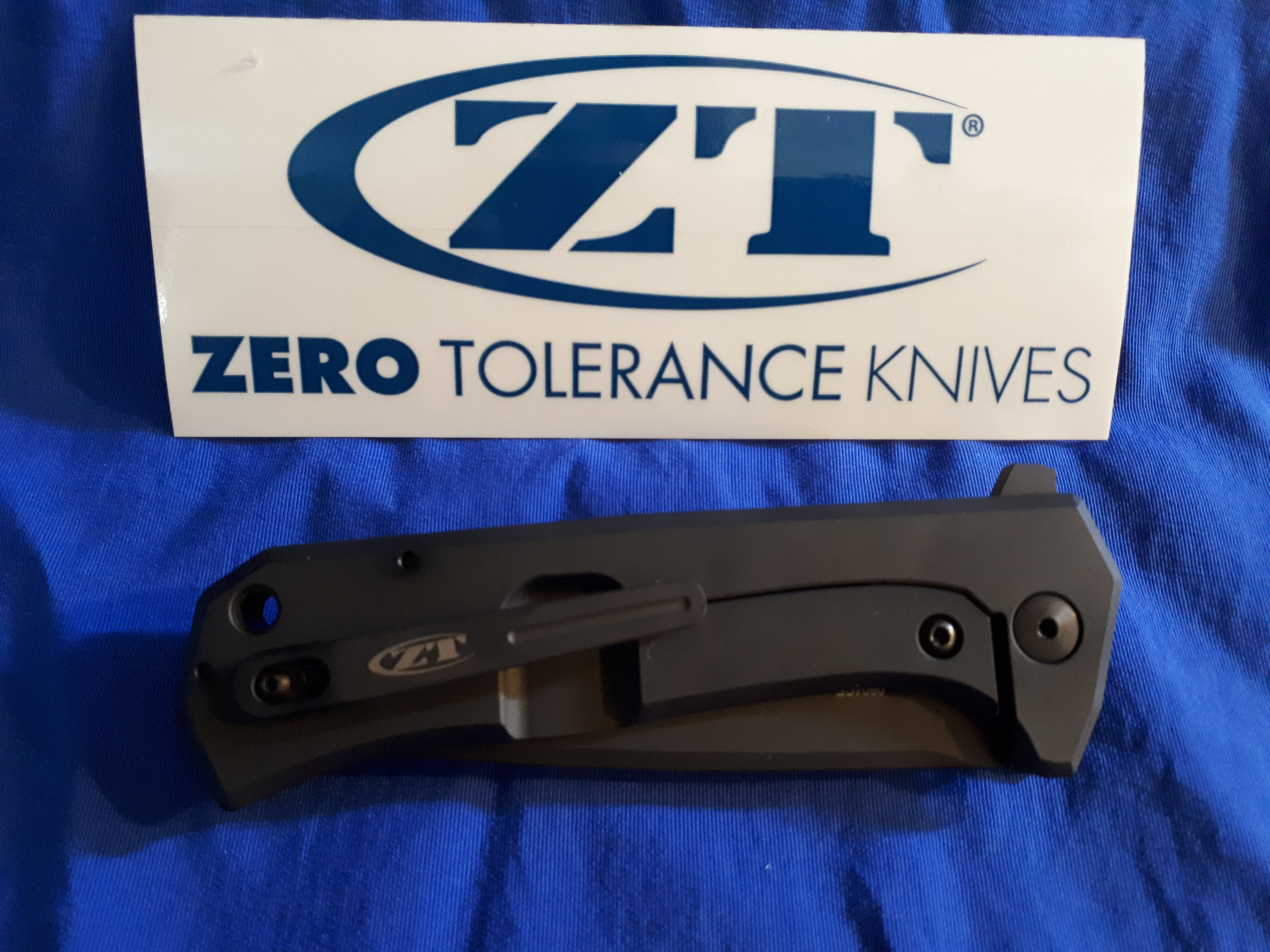 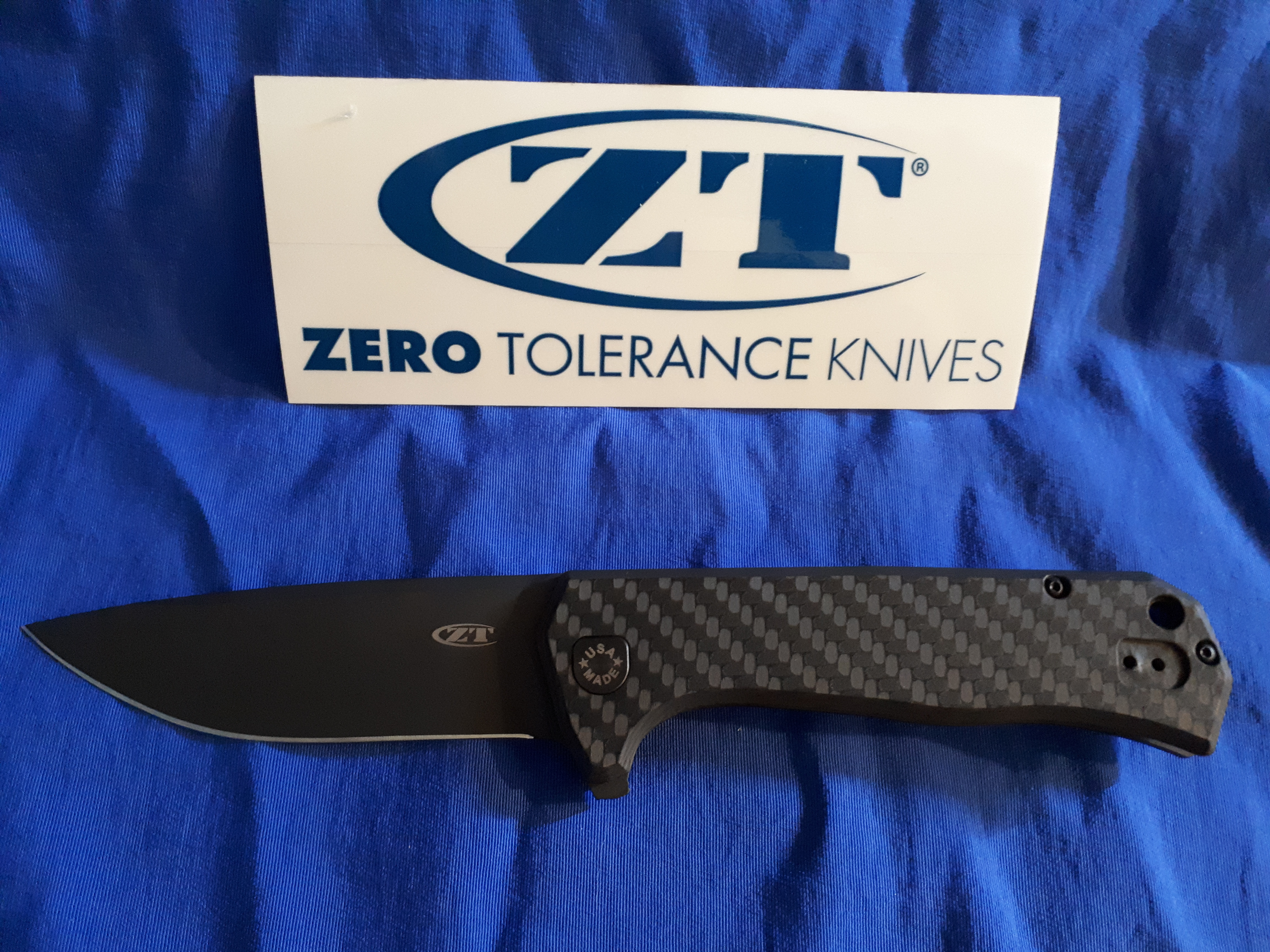 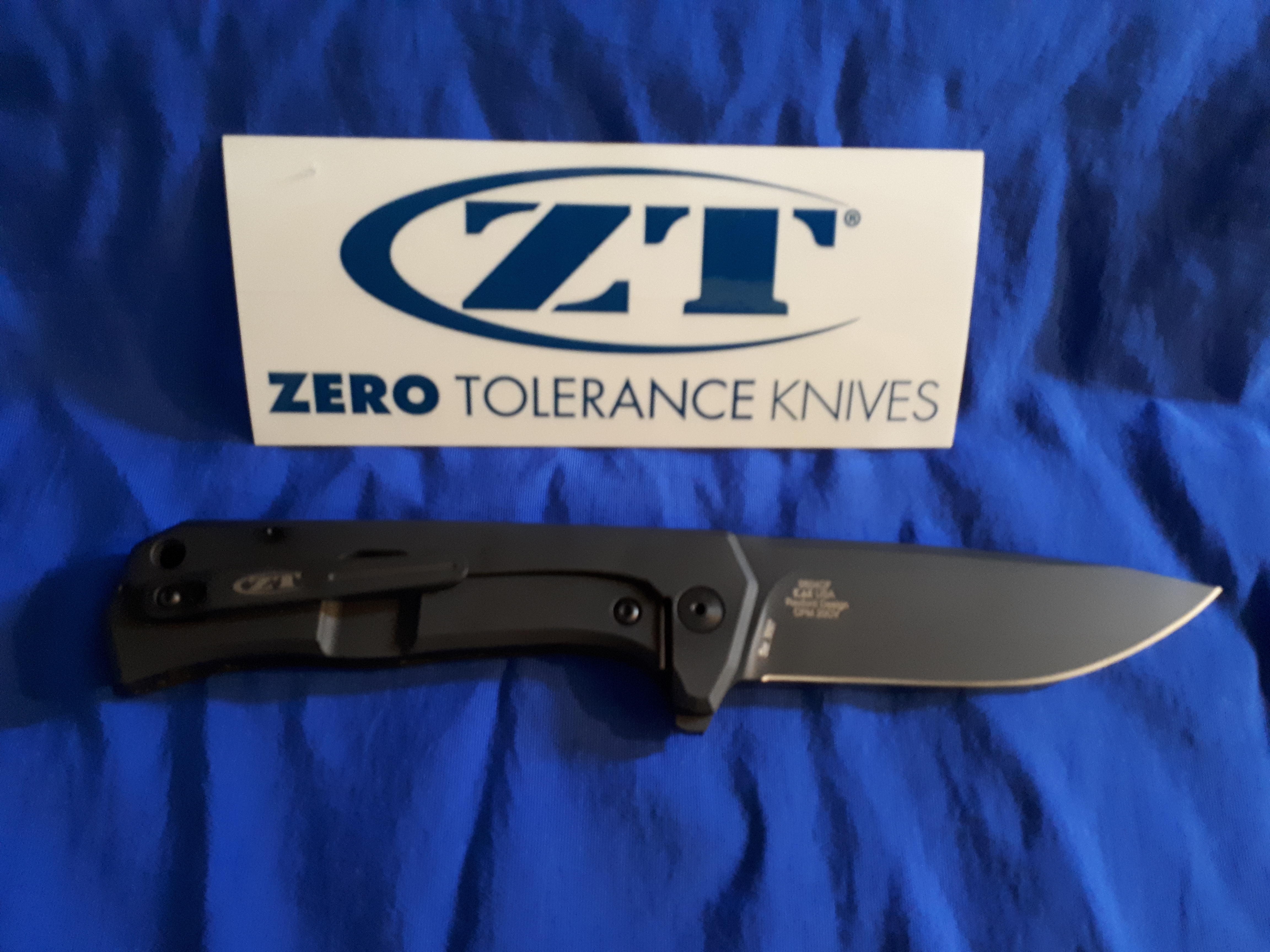 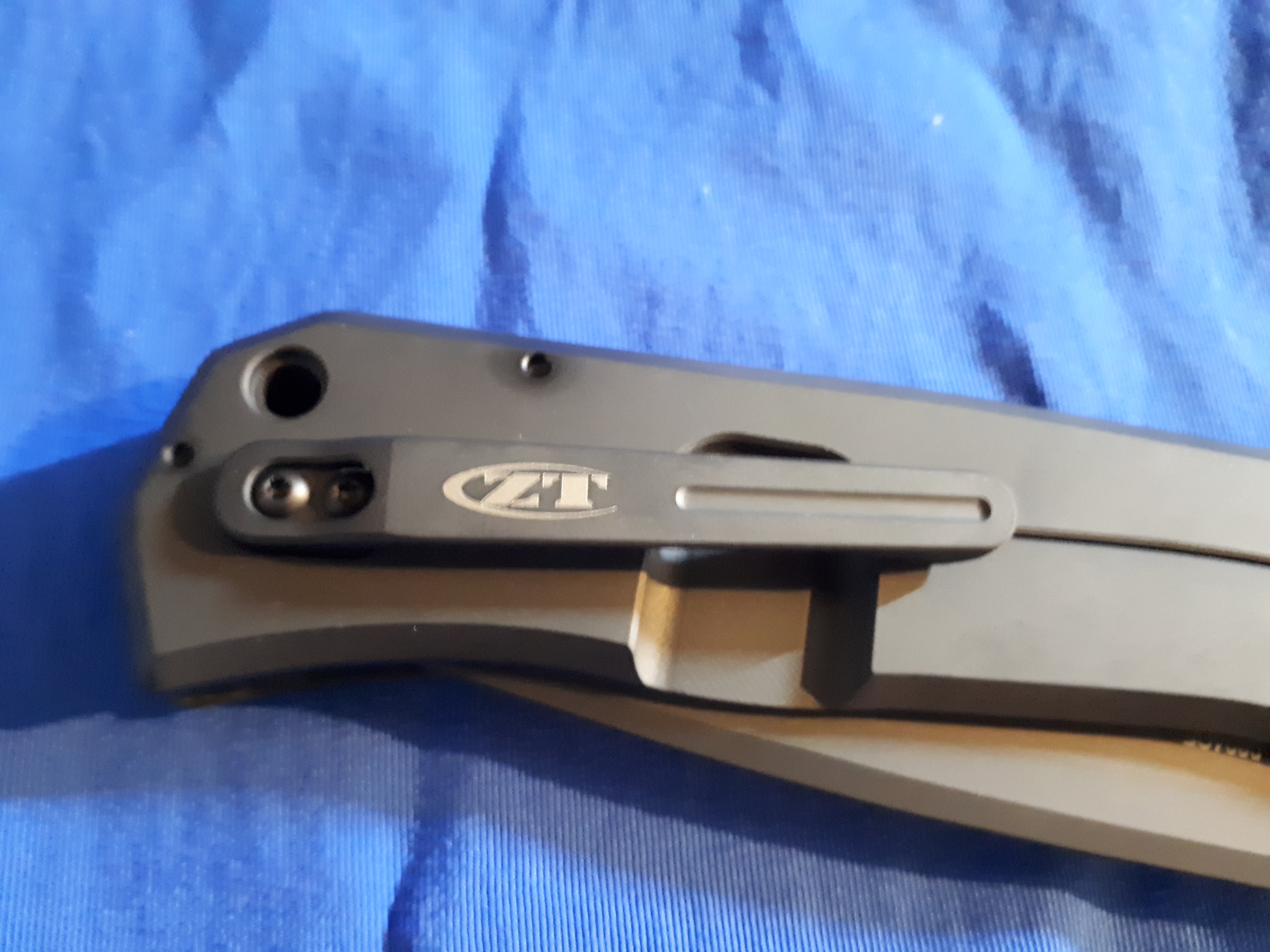 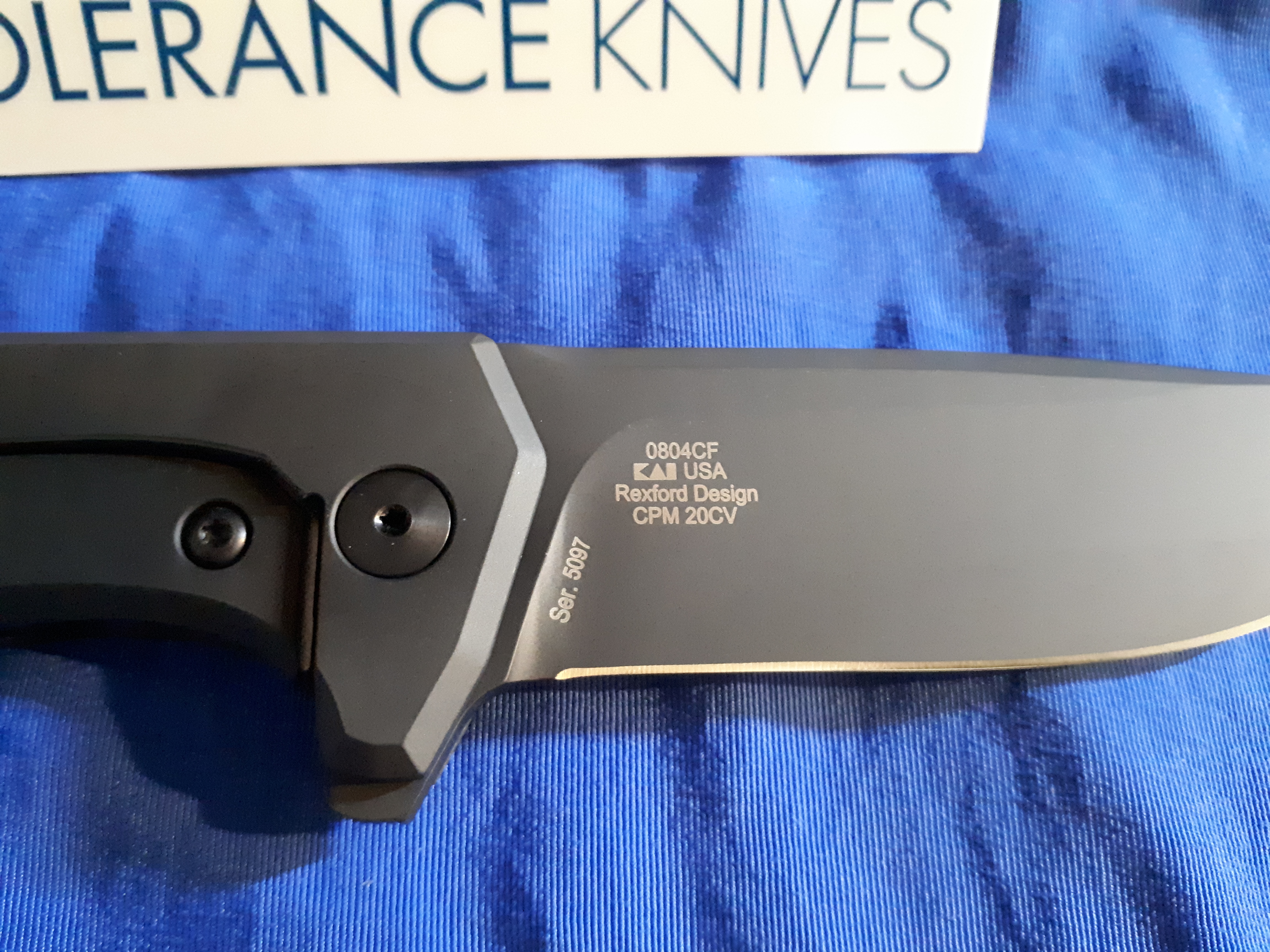 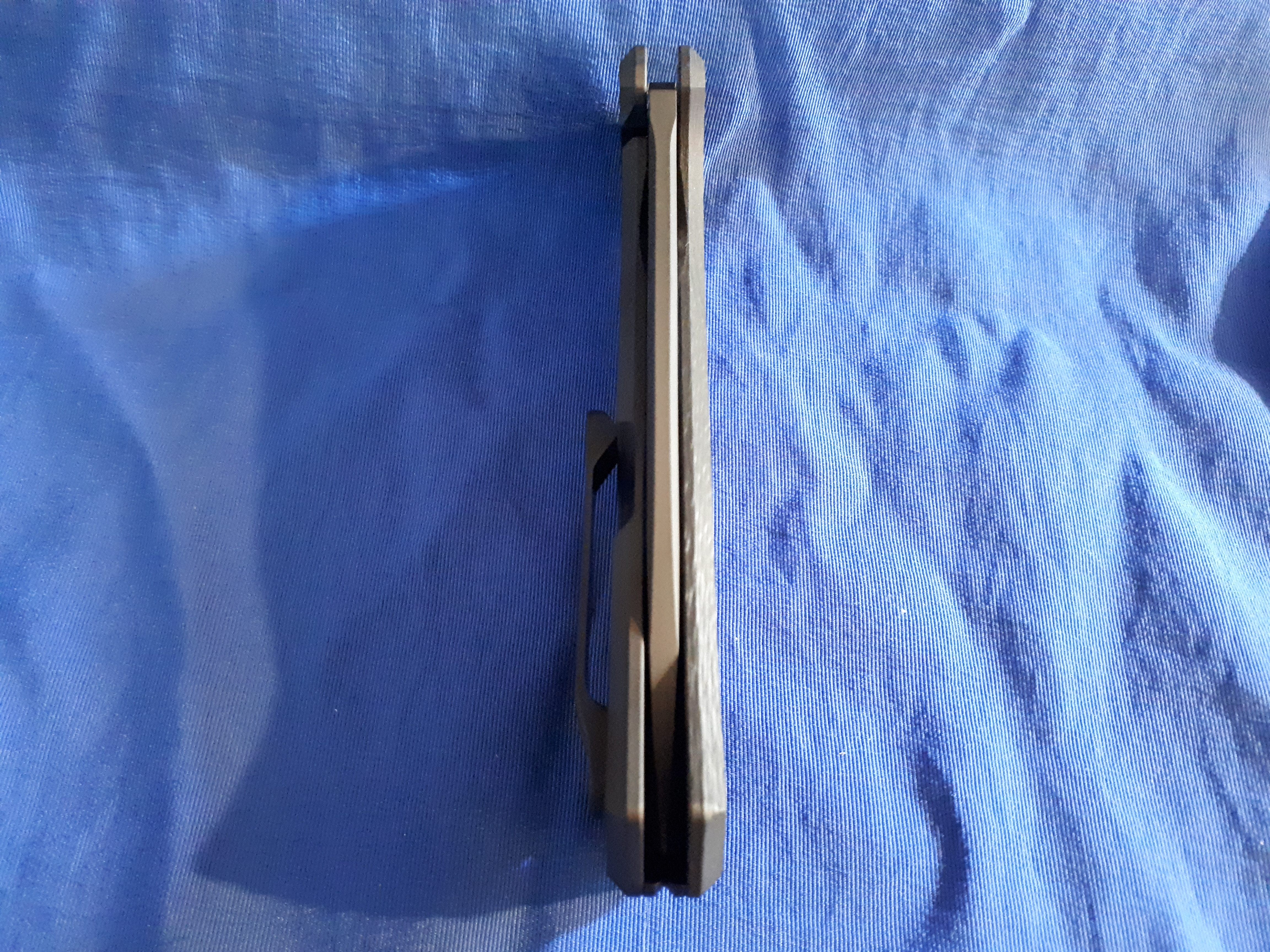 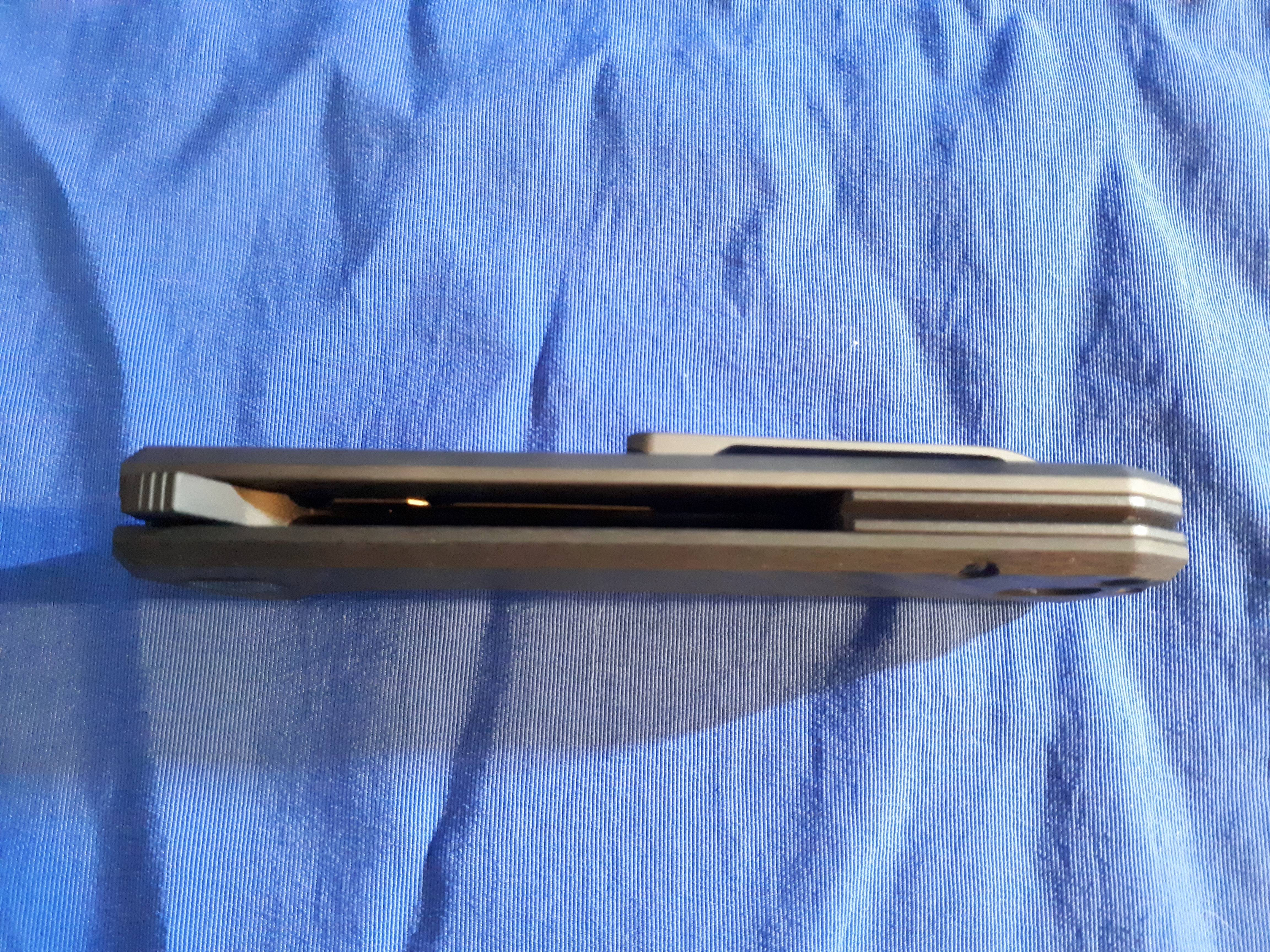 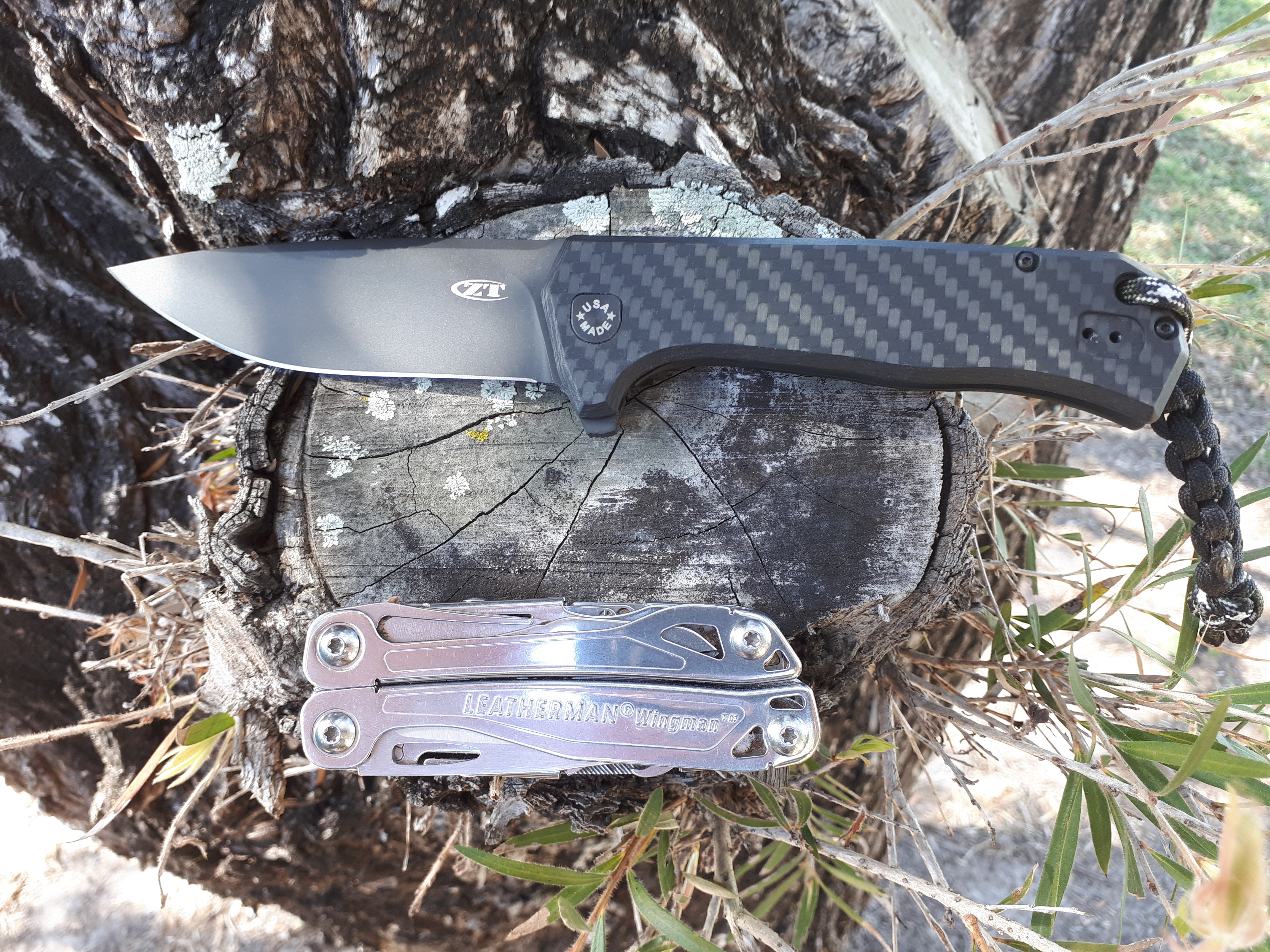 and with the screws added 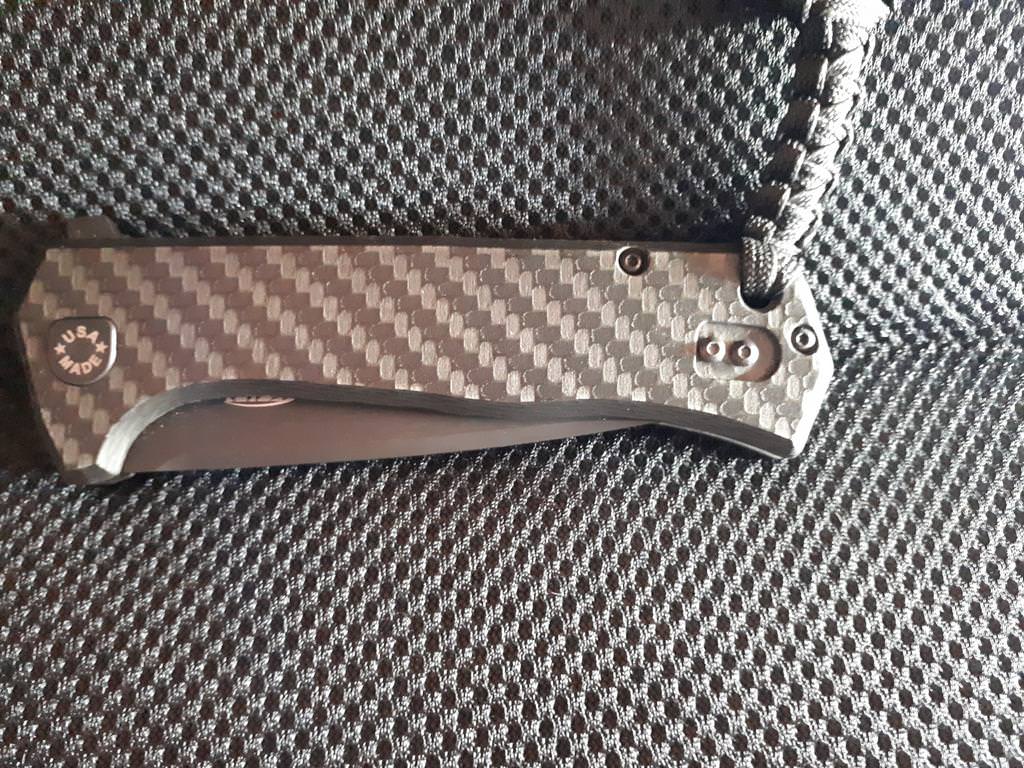 stats and what the company says
ZT super smooth flipper.
Custom Ti clip
ZT and Todd Rexford have teamed up to create the 0804CF, based on Todd’s custom knife, the Gamma.
The nearly four-inch blade is made of fine-grained CTS-204P, a tough, wear and corrosion resistant steel ready for hard-duty.
This powdered metallurgy steel features vanadium-rich carbides for top wear resistance while high chromium helps it resist corrosion.
This high-performance blade is tungsten DLC coated. DLC gives the blade an attractive, matte finish as well as enhancing performance by reducing friction and improving hardness.
The 0804CF’s handle has a carbon-fiber front and a DLC-coated titanium back. These premium materials make the 0804 both tough and lightweight.
A titanium frame lock with hardened steel lockbar insert firmly secures the blade during use.
The ambidextrous 0804 can be easily opened using the flipper and KVT ball-bearing system.
The 0804CF proudly declares its made-in-the-USA status with a handsome shield-shaped badge on the pivot head.
ZT also added a custom aluminum backspacer and machined titanium pocket clip.
The 0804CF, from ZT and Todd Rexford, is a perfect fit when looking for a larger knife built for high performance.

Obviously the stats have changed a little as my 0804CF is in CPM-20cv and not CTS-204P but from my research they are equivalent, so not issue.

My initial reactions and preview, this is a fantastic model, the more I handle her the more I like her, buttery smooth flipping action that flips with a 'snappiness' that I love and once you get over the detent a blade that falls shut under its own weight, the blade is perfectly centred and the handle is large enough that it fills my XXL hands allowing a full grip. Other nice 'custom' touches include DLC coating on the blade, ti side of the frame and ti clip, a milled ti pocket clip (a departure from the norm for ZT) and milled aluminium back spacer. The carbon fibre is simply gorgeous, it is visually appealing with a 3D effect that changes as you move the knife around in the light.
I describe this knife as the Gentleman's Giant, big and burly and yet light and feels lively in hand, classy yet subdued, I am absolutely in love and entirely happy with this purchase.
As far as cutting goes, haven't really done any, but from the tests I have seen I can expect CPM-20cv to do around 350 cuts on sisal rope before needing a touch up. The knife did come shaving sharp from the factory, and I have stopped it to polish the edge further, it is now quite sharp.
While the 0804CF is a big knife it sits well in the pocket and because of its weight the knife doesn't weigh your pants down.

There are a few little nit picks, first off I would have liked ZT to supply a insert (ideally a little piece of CF, but I would have been happy with a piece of stainless steel or even aluminium DLC'ed black) and two torx screws to fill the CF sides inlet for the pocket clip. When paying nearly $400 for a pocket knife I think this is a reasonable expectation. I eventually requested some spare screws from ZT, which they supplied at no charge and I put them in the presentation side.
Secondly the pocket clip has a lot of tension, and it is difficult to put into the pocket (I have often had to use two hands to get it in the pocket and have the clip 'slip over' the pocket lip), but with that being said, once in the pocket the knife sits well and has no issues with deployment (it comes out of the pocket without issues, especially since I have put a lanyard on it)
Lastly, the lock bar does have a sharp edge right along the top lip of the lock bar, but unlike other knives that I have had this exact same problem with, this sharp edge only comes into play if you go looking for it, and specifically run your finger in and around the lock bar area, and I have found during normal use of the knife this sharp edge does not rub against my index finger.
I am thinking when I get a custom insert made for this knife (something I intend to do down the track a bit) I will get whoever I employ for that to see if they can round off this one edge to eliminate this sharp edge (without buggering up the DLC coating in the surrounding areas, something I am worried about if I attempted to do this, and hence why I haven't just gone and done it)

Now that I have had a chance to evaluate this knife, and overall it is one of my favorites of my folder collection. It is a classy and sophisticated large folding knife. I look at this knife as my 'going out knife' and my ZT 0920 as my hard use 'working' knife, though due to its size it isn't at all sheeple friendly, especially with its all black look.

There are some issues though, all relating to the DLC coating. The blade already shows wear even though I have only done light cutting tasks and the pocket side also shows wear makes from going in and out of the pocket. The clip still has a lot of tension and still has a bit of trouble going into the pocket (often requiring two hands to index the knife properly to sit right) but deploys without issue. I have learned that the 'scuffing' of the DLC coating can be removed with Spray and Wipe and a little water and let air dry.

Overall rating (average of all above) 4.8 stars

For full disclosure I would also add I have XXL hands, and that must play in to my review process, and the readers should keep that in mind when reading my reviews and recommendations.
Lastly I ONLY use folding knives for light cutting duties, so I will not do 'hard use' cutting tasks with any folder, that's what I have fixed blades for, so cutting tests consisted of cutting paper, cardboard, packaging, paracord, some food prep (again, not a task I use folders for for the most part) and other duties a stay-at-home-dad would use a cutting tool for around the house.

and my overview vid