Most are now aware of my thoughts to start compiling bushcrafting skills in Australia History, if not please read this thread, http://bushcraftoz.com/forums/showthread.php?3094-Periods-or-Era-s-in-Australian-Bushcraft

I will be the first to admit that is going to be bigger than big as far as projects go, but I have a habit of finishing what I start and I will give this a go as time permits.

If it gets people thinking about Australia, its history, and bushcraft skills relevant to those that bushcraft here. it can only be a good thing for an Australian bushcraft forum!

If you want to contribute please include a source for the information be it link, book, or personal experience and clearly say it if what you are saying is just something you think might be the case.

There are tons of threads already in this forum that relate to this subject, but this thread will be a good place to start, feel free to post links to other relavent threads on bushcraft OZ as required.

Here are the questions for this discussion feel free to add more as discussion evolves these will just get things rolling.

1) Prior to European contact, what bushcraft skills did aboriginal people have that made them so successful surviving in Australia.

2) Select a subject, Shelter, Fire, Food, Tools, fibers etc and discuss whatever aspects of the subject that you are interested in.

3) What skills did they employ that were unique?
B

Location
WA and the Sunda paleotropics

question 1). I have no source to quote but I believe that the skills that really helped the first Australians survive have to be be their ethnobotany and their understanding of terrain - to find water etc.

Finding or processing edible carbohydrate has to be the number one survival skill e.g. using cycads to make bread.

This post is a work in progress, I will tidy it up over the next few weeks and add more, feel free to contribute if you can, just reply to this thread and I will include the information in this post.

The aboriginal people used a wide variety of tools prior to European settlement to assist them in their daily lives. Below are some examples of such tools, that buscrafters with a primitive skills bent can, can make and hence learn to decrease their reliance on the modern tools and materials.

Simple knapped cutting tools: Made from chert, these tools were made to perform simple cutting tasks. Sometimes they were carefully and expertly created, but often they were quickly made objects to perform a simple task, once completed they were discarded.

Some were quite complex, but such skilled knapping was generally not the norm 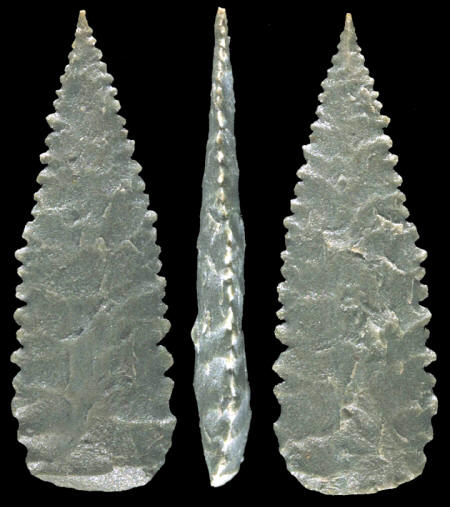 Stone Axes were made from various materials and knapped and ground to shape.

Spears and Spear Throwers (Woomera)
Similar to the atl atl the Woomera was a throwing tool designed to launch spears.

Its use increased the mechanical force and allowed spear to be thrown over much longer distances.

The boomerang is an iconic aboriginal tool. Primarily for hunting and fighting, but also used for ceremonial purposes, digging and making music (as clap sticks).
There were basically two types of boomerangs, returning, and non returning. Here is a good link for more info on this subject. http://members.ozemail.com.au/~mmichie/engag_t&w.htm#boomerangs The natives have few tools ; the principal one is the stone axe, which resembles
the stone celts found in Europe. This useful and indispensable implement is of
various sizes. It is made chiefly of green stone, shaped like a wedge, and ground
at one end to a shai-p edge. At the other end it is grasped in the bend of a doubled
piece of split sapling, bound with kangaroo sinews, to form a handle, which is
cemented to it with a composition of gum and shell lime. This cement is made
by gathering fresh wattle gum, pulling it into small pieces, masticating it with
the teeth, and then placing it between two sheets of green bark, which are put
into a shallow hole in the ground, and covered up with hot ashes till the gum is
dissolved. It is then taken out, and worked and pulled with the hands till it has
become quite stringy, when it is mixed with lime made of burnt mussel shells,
pounded in a hollow stone — which is always kept for the purpose — and kneaded
into a tough paste. This cement is indispensable to the natives in making their
tools, spears, and water buckets. The stone axe is so valuable and scarce that it
is generally the property of the chief of the tribe. He lends it, however, for a
consideration, to the best climbers, who use it to cut steps in the bark of trees, to
enable them to climb in search of bears, opossums, birds, and nests, and also to
cut wood and to strip bark for their dwellings. For the latter purpose the butt
end of the handle of the axe is made wedge-shaped, to push under the sheets of
bark and prize them off the trees.

Another stone tool, like a chisel without a handle, is u,sed in forming weapons
and wooden vessels. With splinters of flint and volcanic glass the surface of
wooden articles is scraped and smoothed, and every man carries a piece of hard,
porous lava, as a rasp, to grind the points of spears and poles. These stone
implements, although well known to the middle-aged aborigines of the present
day, are, in consequence of the introduction of iron, not now in use or to be met
with, excepting about old aboriginal camping places.

The writer lately found, in a ploughed field, two stones, which he showed to
one of the oldest and most intelligent men of the Colac tribe. One of them is an
oval, silicious stone, very hard, about six inches long, five inches broad, and three
inches thick, waterworn, and slightly hollowed on one side, as if used for
pounding some hard substance upon, and rounded on the other side, with a funnel-
shaped hole in the centre two inches in diameter at the mouth and one inch deep,
and having a much smaller hole of the same form on each side of the larger one
and joining it. The other stone, which was found lying alongside, is of the same
material, of cylindrical shape, six inches long by three inches in diameter, with
one end pointed so as to fit into the centre hole of the flat stone. The natives to
whom these were shown said they had never seen anything like them before,
and did not know their use. It is evident, however, that they were an
aboriginal mortar and pestle for grinding shells for cement. The writer has them
still in his possession.

A tool is made of the large bone of the hind leg of the forest kangaroo,
sharpened to a chisel point. With this tool is cut the hole for the hand through
the heavy shield, Malkar. A bodkin, or awl, is formed from the small bone of
the hind leg of the forest kangaroo, ground to a fine point, and is used for sewing
rugs. A finely-tapered sharp pin Ls made of the small leg bone of the brush
kangaroo or opossum, and is essential for extracting thorns and splinters of wood
from the hands and feet. Ti-tree pins are used for pegging out the skins of the
forest kangaroo.

Knives are of various kinds and material, according to the purposes they are
to serve. For skinning animals, marking rugs, and cutting the human skin to
produce ornamental wens on the chest, back, and arms, knives are made of
splinters of flint, or of sharpened mussel shells. The sea mussel shell found on
the coast at Warrnambool is preferred, but freshwater mussel shells are also
used. For skinning the ring-tailed opossum, and for dividing meat, the leaf of
the grass-tree is used, and also the long front teeth of the bandicoot, with the
jaw attached as a handle. The shells of the freshwater mussel and of the sea
snail serve for spoons. Every person carries one. In making necklaces of the
quills of the porcupine ant-eater, the holes at the roots of the quills are burned
through with a wooden pin made red-hot in the fire.
You must log in or register to reply here.
Share:
Facebook Twitter Reddit Pinterest Tumblr WhatsApp Email Share Link
Menu
Log in
Register
Top