This is an initial overview of my newly acquired WE Synergy 2. I am yet to do much cutting with it (the only cutting I have done is the usual slicing of a few packages and initial edge keenness testing on phone book paper and arm hair) as I have to get a heap more cardboard for testing, I had a clean up at home and all my testing cardboard got turfed out. This is the third Integral I have now, and all of the integrals I have are made by WE Knife Co. I have to say I really like Integrals as they are still reasonably unusual and showcase a knife companies skill at machining/CNC'ing as the Integral build is a lot more difficult to produce than the usual slab sided titanium frames using standoffs. The only downside to Integrals is they tend to be more expensive than regular ti framed knives, though WE seems to be able to produce production integrals for a somewhat reduced price.

What the company says
WE Knives - 912 - Synergy2
In 1999, after a 20 year career as a Mechanical Design Engineer in the Silicon Valley electronics industry, Jim O’Young retired from the corporate world to pursue his passions: competition pistol shooting at the highest level and partnering with his friends & shooting sponsors to design, manufacture & market innovative products for the firearms & cutlery industries.
Jim levered his knowledge & experience to design & engineer the SpeedTech Synergy using SolidWorks, a state of the art, 3-dimensional, solid modeling CAD software tool. It was the very first knife created using this technology and featured several design elements never seen before in a production folding knife: an ergonomic, fully 3-D digitally sculpt surface handle machined from a single, solid billet of material, a captive floating bearing system and a button lock with increased engagement geometry. The Synergy was truly way ahead of its time and was awarded the Most Innovative American Design at the 1999 BLADE Show by its industry peers.
On the 20th anniversary of the original Synergy design, Jim is proud to partner with WE Knife to continue the legacy and introduce an updated & re-engineered Synergy2 to a new generation of cutlery enthusiasts.
Flipper action, ceramic bearings, steel lock insert. Comes in several configurations, including shred carbon fiber inserts, plain ti and anodised ti frames as well as a trailing point and tanto blade styles.
Trailing Point
Blade Grind: Hollow
Handle Material: 6AL4V Titanium
Weight: 123g/4.24oz

The WE Synergy 2 was shipped to me in a box containing a propitiatory WE zippered plush lined case, with the knife encased in a plastic sleeve, some paperwork and microfiber cleaning cloth.

I have come to expect a lot from WE as far as Integrals are concerned and again they did not fail to deliver. As I said above I have three WE Integrals now and so have a bit of experience as to what WE is capable of doing in regards to making an Integral. The fit and finish on the Synergy 2 is first rate, both sides of the frame is covered in intricate milling adding a heap of texture as well as jimping in several places. The frame is contoured and everything lines up and the flame anodization is executed very well and is visually stunning. Again I have to comment on the tolerances achieved on the 912, they are very tight with the blade just clearing the handle and showcases WE's ability to achieve excellent fit, finish and tight tolerances. The integral handle features milled texturing over most of the exterior, all edges are chamfered and there is a lot of milling/shaping and jimping added to the handle. Lastly a lanyard hole is included at the rear of the knife.

The hardware (what there is of it, so pocket clip, lock bar insert screw and pivot) is anodized the same flame pattern as the frame. The lockbar insert is a grey colour, being the only different colour on the frame. The pivot has the WE logo emblazoned on one side of it. The blade is almost sterile, with only the designers mark one the lock side and the M390 stamp is almost hidden on blade just above the pivot section.

The firing action on this knife is excellent and the blade deploys with a 'snap'. It is pretty easy to wiggle shut the blade. The knife fires as good as any of my other 'fidget flippers' I own and is easily on par with the best ZT's, Real Steel "S" class and is very, very close to the Reate's I have.

The trailing point blade is perfectly centered and features a high hollow grind and a heavy stonewash finish that is quite pleasing to my eye. The blade has a sharpening choil. There is no blade play or lock rock. Lock up is hard to judge, as the lock bar insert kind of hides the actual lock up, but viewing it from the other side it looks to be around 20%.

The knife arrived shaving sharp and I have stropped it and it is now quite sharp and slices paper efficiently. The thin stock and hollow grind makes this knife an efficient slicer, and from the little cutting I have done the knife seems to cut cardboard very well. The blade seems to be very thin behind the edge and I expect it to slice very well.

The knife's pocket clip is a departure from the usual WE milled pocket clip and is basically a stamped affair and unlike any WE pocket clip I have seen. It is reasonably deep carry, with only a small amount of the knife poking out of your pocket when carrying it. I have found that the knife doesn't go easily into the pocket one handed, as the exterior milling under the clip, on the frame acts like sandpaper, and the knife has been quite hard on my pocket lips even only after a few days carry. I simply store the knife two handed and baby it in to save my pocket lips a bit. Though once in the pocket the knife rides well, doesn't take up a lot of pocket real estate and deploys well (as long as you grasp the lanyard well and yank) 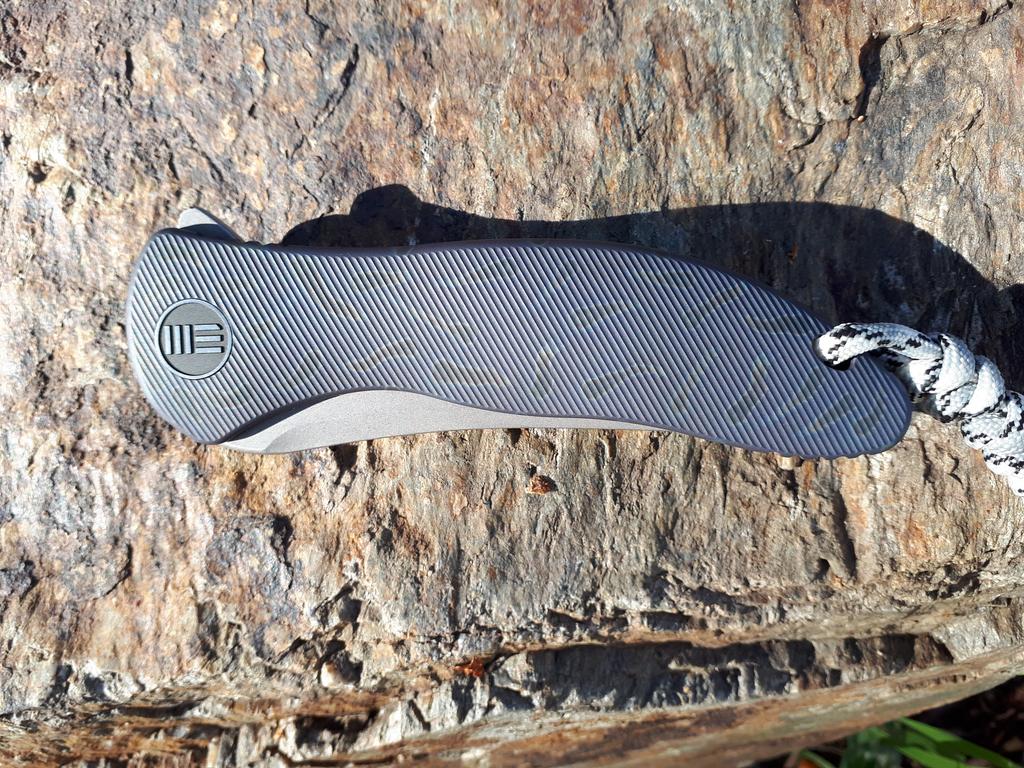 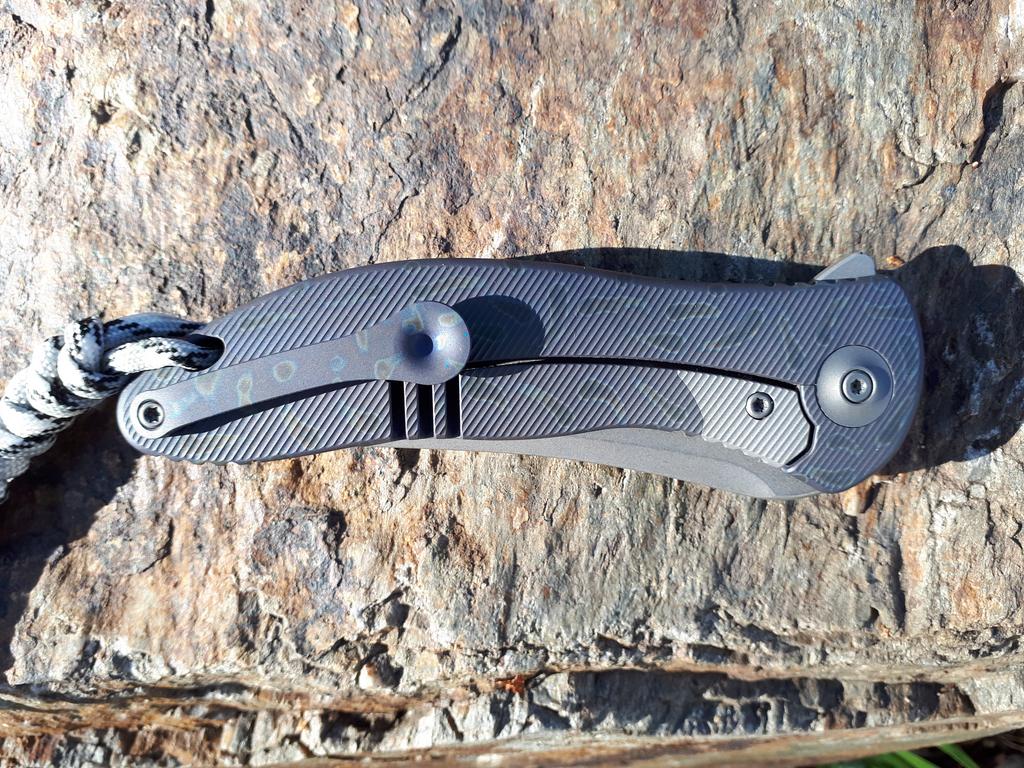 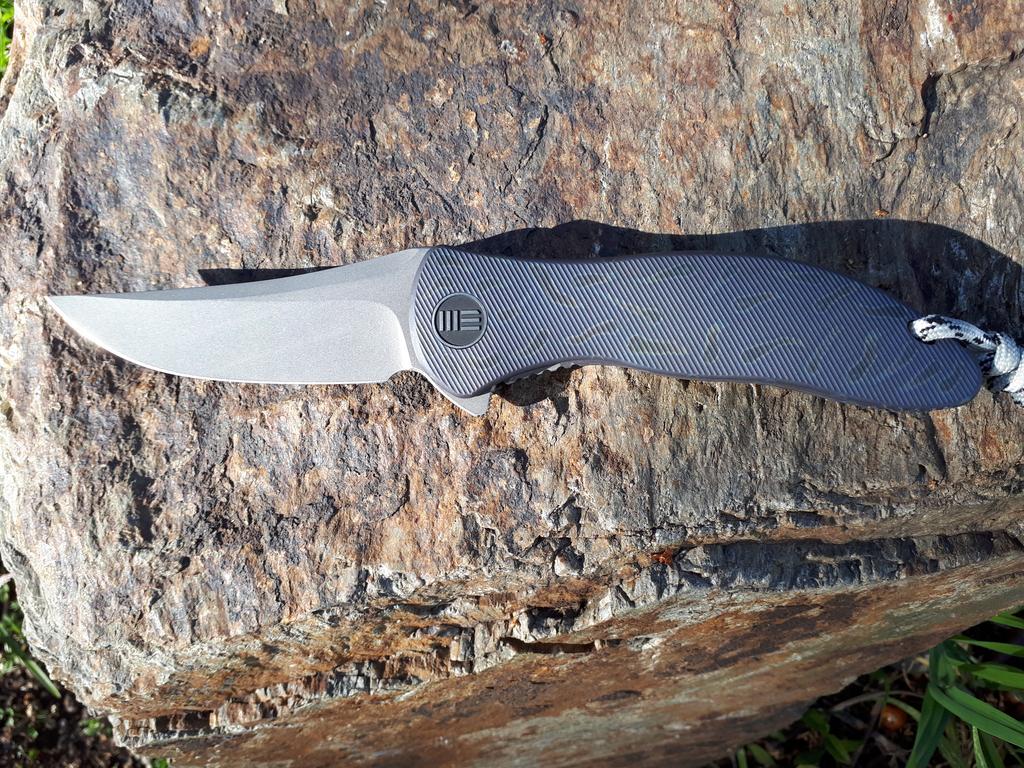 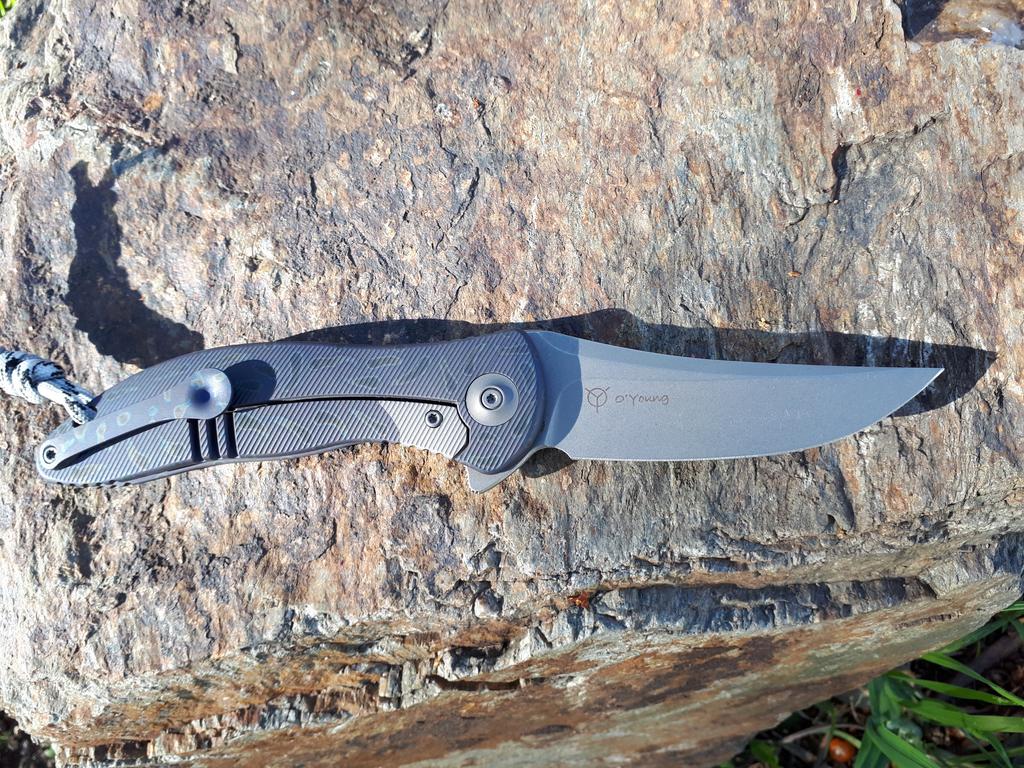 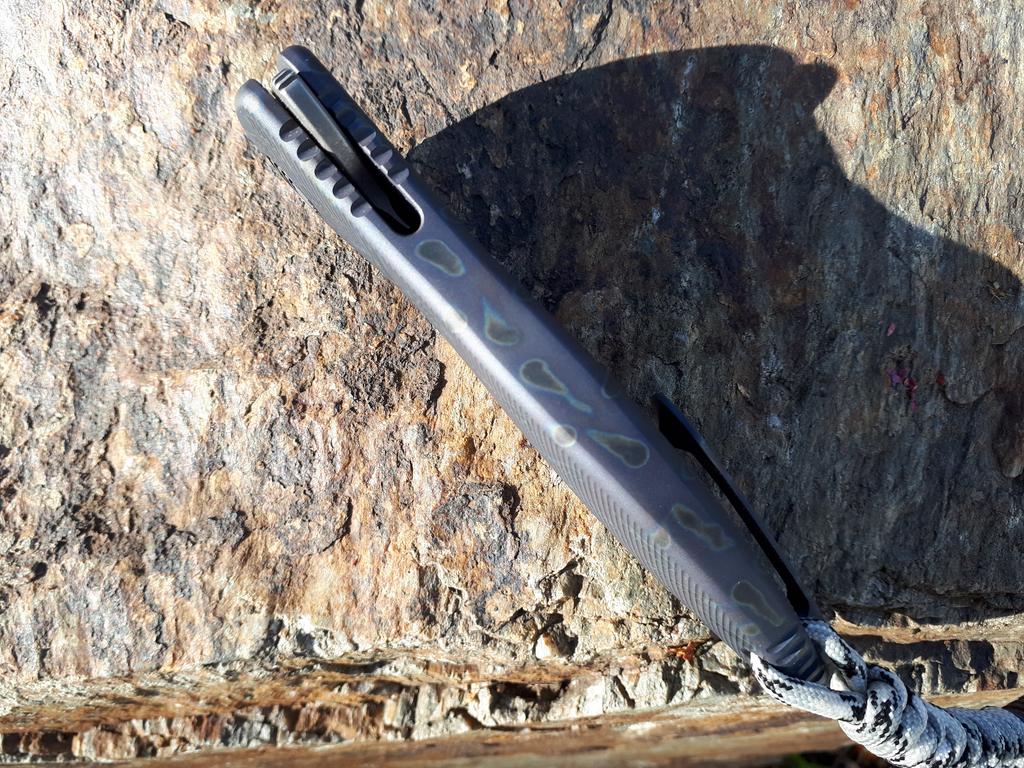 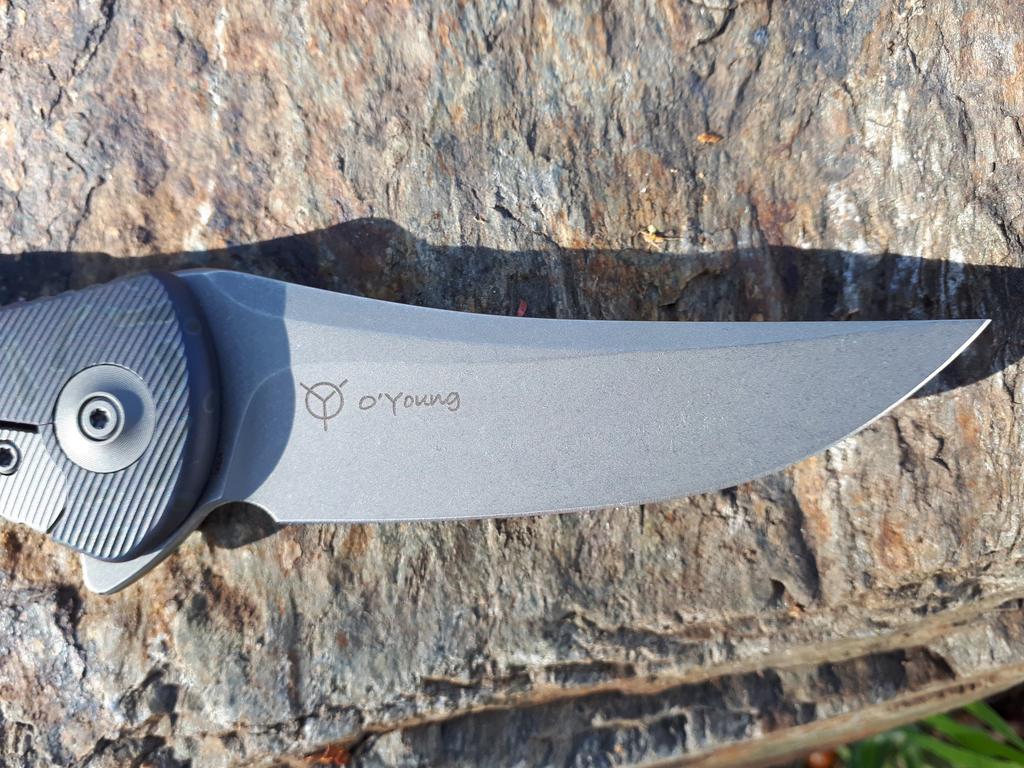 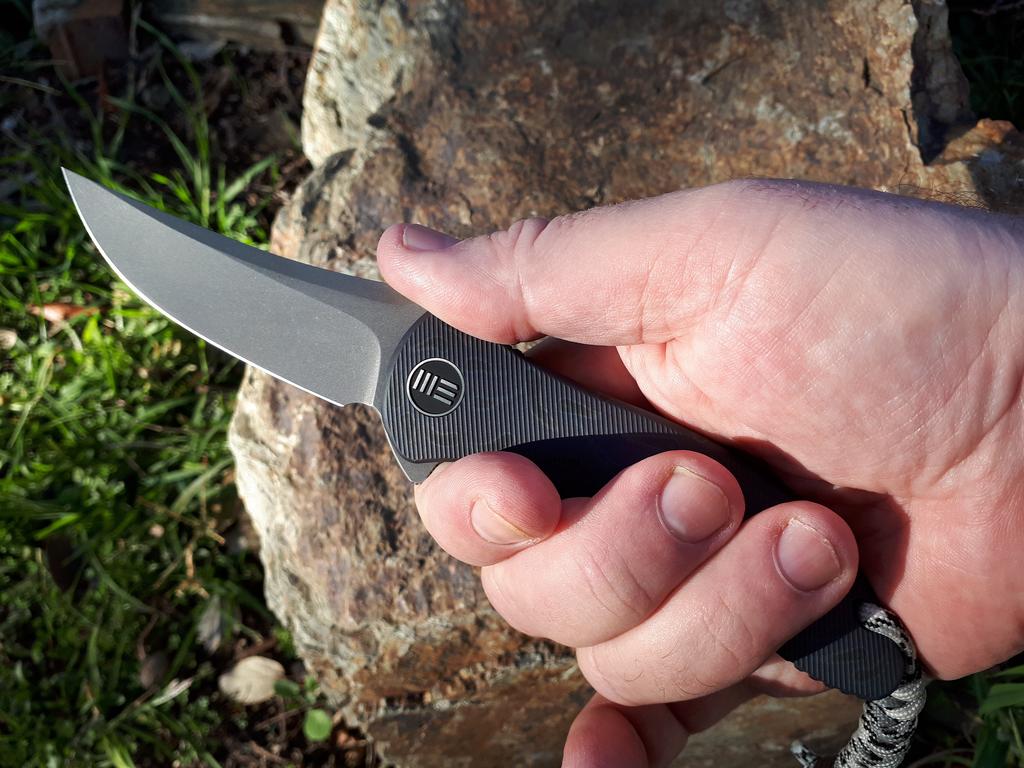 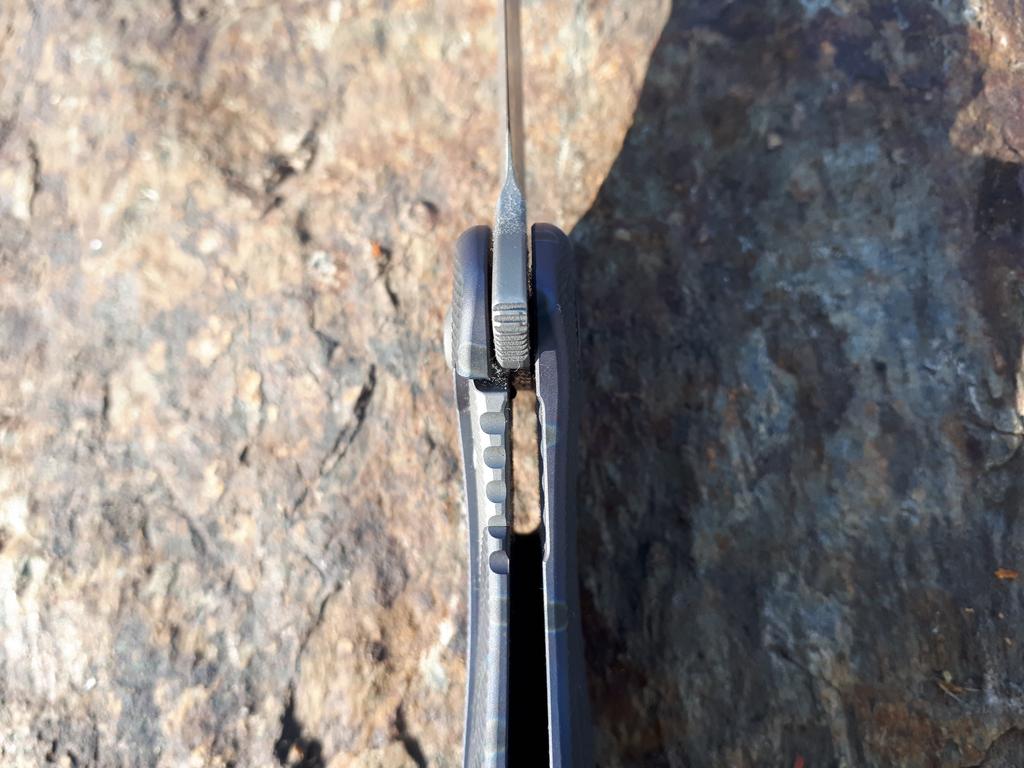 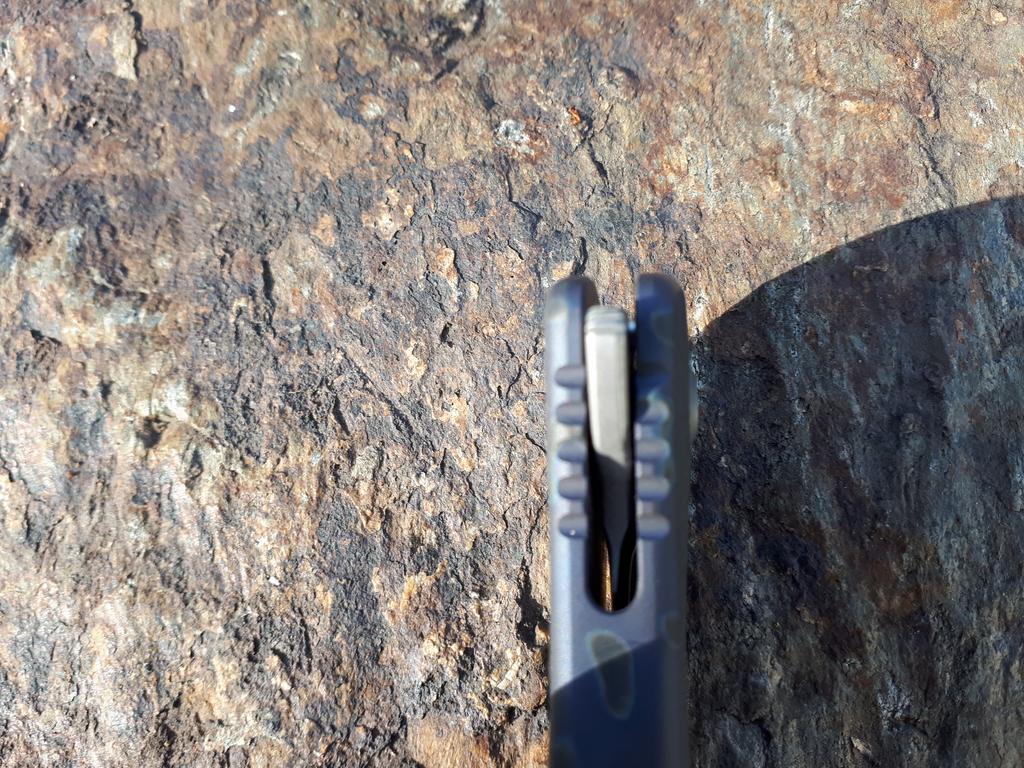 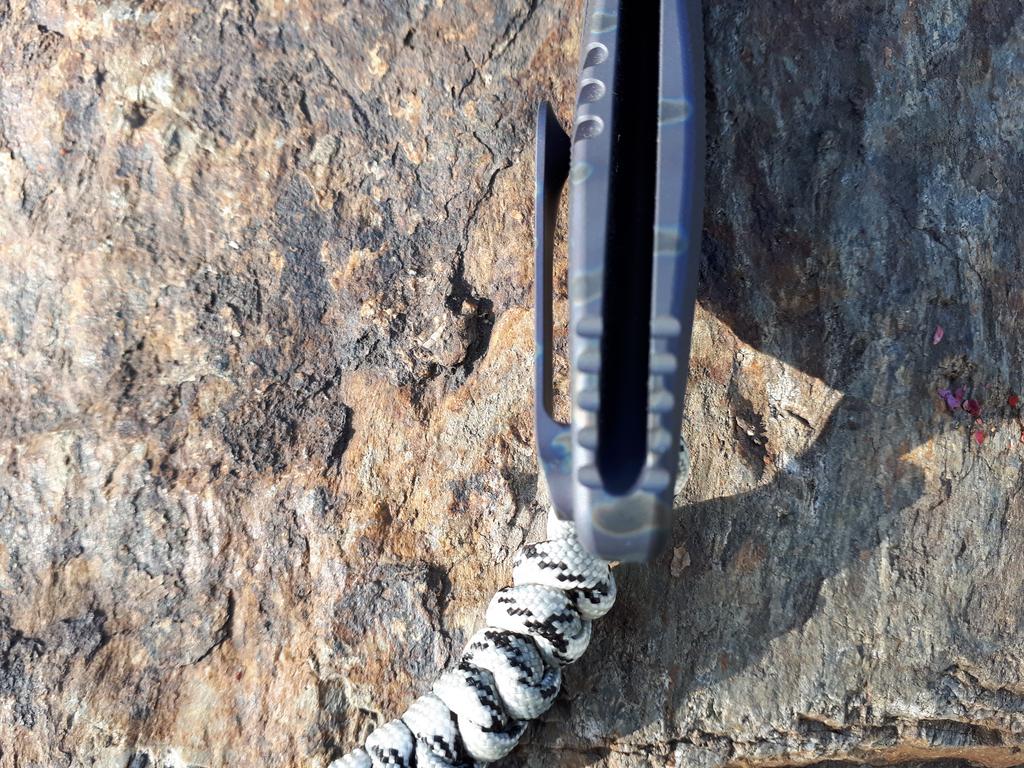 Conclusion, I love and hate the Synergy 2, I love the stunning looks of the knife, and the idea behind its design and its construction. But with that being said I hate the extra jimping that has been applied to the frame that only diminishes my experience of using the knife. Every time I flip it open I am reminded that WE has added jimping that was unnecessary (IMHO) and I feel as though they didn't actually carry or use the knife before production. I only wish they had eliminated most of the jimping and produced a real user Integral ,one that is a pleasure to fidget flip and cut with.

For full disclosure I would also add I have XXL hands, and that must play in to my review process, and the readers should keep that in mind when reading my reviews and recommendations.
Lastly I ONLY use folding knives for light cutting duties, so I will not do 'hard use' cutting tasks with any folder, that's what I have fixed blades for, so cutting tests consisted of cutting paper, cardboard, packaging, paracord, some food prep (again, not a task I use folders for for the most part) and other duties a stay-at-home-dad would use a cutting tool for around the house.

and my vid overview