here's my vid overview of the WE Jixx, I will do a written review in a week or so time

here's my written review of the WE Jixx.
A while ago True Talon gave me the opportunity to review a Mikkel Willumsen Chibb's and while I liked it the knife didn't have all the qualities I demand these days in my EDC knives, it did put Mikkel Willumsen on my radar as a maker/designer that I should keep an eye on. That's where the Jixx comes in, it is designed by Mikkel Willumsen and does have all the features I like so the other week I asked True Talon if I could handle one and he obliged, sending one along with the latest batch of review knives. As soon as I checked for lock up (I had watched several reviews on the Jixx and they all said it had light lock up, I'll talk about this later in the review) and fired the knife, I knew I had to buy it.

what the company says
WE Knives - 904 JIXX - Mikkel Willumsen Tactical design.
The WE 904 JIXX knife features a titanium handle with titanium & G10 handle and an aggressive drop point M390 blade for all your EDC needs. Designed by Danish knife maker Mikkel Willumsen. Mikkel designs his knives to withstand hard use from the kitchen to the battlefield.
(this knife was originally going to be called the Ryback)
Comes in a storage pouch with cleaning cloth.
Flipper, ball bearing assisted action. Lock Insert.

WE 904 Jixx M390/ano'ed titanium and G-10 frame lock flipper
The Jixx was shipped to me in the usual manner by WE, a box containing a propitiatory WE zippered plush lined case, some paperwork, with the knife encased in a plastic sleeve and microfiber cleaning cloth.

The knife features an open design with the usual backspacer being replaced with 4 standoffs. The titanium and G-10 handle slabs are secured with two body screws on each side (all hardware is titanium as they aren't magnetic, pivot and body screws screws, pocket screw, lockbar insert are all T8 torx), and they have been have been contoured and the titanium has had a black anodization applied. There are several colour options available for the G-10, black, tan and OD green and personally I like the black version the most. All the hardware is coloured bronze, which adds a classy touch to its looks.
Lastly a lanyard hole has been placed right at the back of the handle. The lanyard hole works as it should and easily allows non gutted paracord through, and I added a snake knot my last .357mag bead to the knife.
The keyed (I am assuming it is keyed as it only has torx on one side) pivot which is also ano'ed bronze and features WE's mark on it. The handle has not been internally milled as the G-10 inlets serve as all the weight reduction the knife needs (as it is reasonably light for its size). Almost all the edges on the knife's handle have been chamfered and the fit and finish on these knives is up to WE's usual very high standard. The only part that seems to have been missed is in and around the lock bar and there are some sharp edges there. These aren't a problem though as they only present when you specifically go looking for them and don't come into play when using the knife.
The bolster has had a very light stonewash finish applied and then anodized, and I like this as this finish wears well and hides scratches and marks well. The pocket clip is also stonewashed.

Because of the way WE has set up the G-10 panels the knife is essentially a bolster lock, with the lock bar featuring an integrated steel lockbar insert and no over travel stop as the G-10 panels act to limit the lock bars ability to extend further than it should. Access to the lock has been aided by a slight cut out for the pass through, something I have come to appreciate and miss if isn't included.
Lock up is deceptive, like on several WE knives I have reviewed recently, as the lock bar insert kind of hides the actual lock up, but viewing it from the other side it looks to be around 30%, it is the full length of the lock bar insert.
The G-10 is done very well and I have no issues with it, and am not concerned that it isn't carbon fiber.

The flipper tab has jimping and the Jixx functions as a light switch flipper, and the flipping action is excellent. The knife fires with a snap and drops shut smoothly. It is among the best flippers I currently own and the way it fires was one of the reasons I bought it.

The milled titanium pocket clip is set up for right hand carry, tip up carry only, and the clip is secured with a single screw. The pocket clip position is quite low on the frame and because the clip is nicely shaped and chamfered it doesn't seem to cause any hotspot issues (though I thought it might because of where it is placed on the frame)
The knife goes in and out of the pocket easily. It is quite deep carry and the knife rides very well in pocket.

Now to the blade, the Jixx's blade is a curved drop point featuring a compound grind, with a hollow grind for most of the blade and a flat grind at the tip. The blade also has a slight recurve. A small sharpening choil as well as a very useable finger choil have been included, as well a elongated 'hole-in-the-blade' that can be used to thumb open the knife. I found I could slow roll, thumb open the Jixx, but couldn't pull off a "spydie flick". I will never use this feature though as the flipping action is so good.
Billboarding is minimal, with only the makers mark on the blade, and the M390 mark in the finger choil area. Lastly a heavy stonewash has been applied to the blade.
The blade is well centered. There is zero blade play and no lock rock.

The knife performed reasonably well slicing cardboard, and proved to be a good slicer for the most part, though I did have some bunching issues (despite its 4mm spine thickness the compound grind did its job and thinned out the behind-the-edge geometry). The knife proved to be a good stabber, and I often started a cut by stabbing the knife into the cardboard and then proceeded to cut.
Concerning keenness, the knife arrived from the factory just off shaving sharp (about usual from what I have been seeing from WE). I did touch the edge up before starting any cutting tests. The cutting I did didn't seem to affect keenness all that much and it only took a few passes on the SharpMaker and a stropping to make it as keen as it was before my cutting tests. I would also mention that the heavy stonewash finish does very well at hiding wear and marks, even after my cutting tests there was little to no residue (from the sticky tape and cardboard) left on the blade and it only took a quick rinse in some water to remove what was there.

The Jixx fits my large hands well (see below though) and I didn't find any hotspots during any of my cutting tests when holding the knife in the forward saber grip using the finger choil. Concerning the handle and its fitment of my hand, holding the knife 'normally' for me and my sized hands is uncomfortable and I only hold the knife forward, utilizing the finger choil, and if that choil had not been included I would not have bought the knife (as it wouldn't have fit me properly)
Now that takes me to the only complaint I have with the ergo's of the Jixx, at the back of the handle are two slight protrusions that I find troublesome, and wish were not included in the design. When holding the knife 'normally' these two spurs hit me right in the little finger and create hotspots. I just wish they had been omitted and the handle just tapered off more neutrally. Thankfully they don't come into play when I hold the knife in the forward grip, though I have found I still sometimes snag on them and see them as a hindrance rather than a beneficial addition to the design. 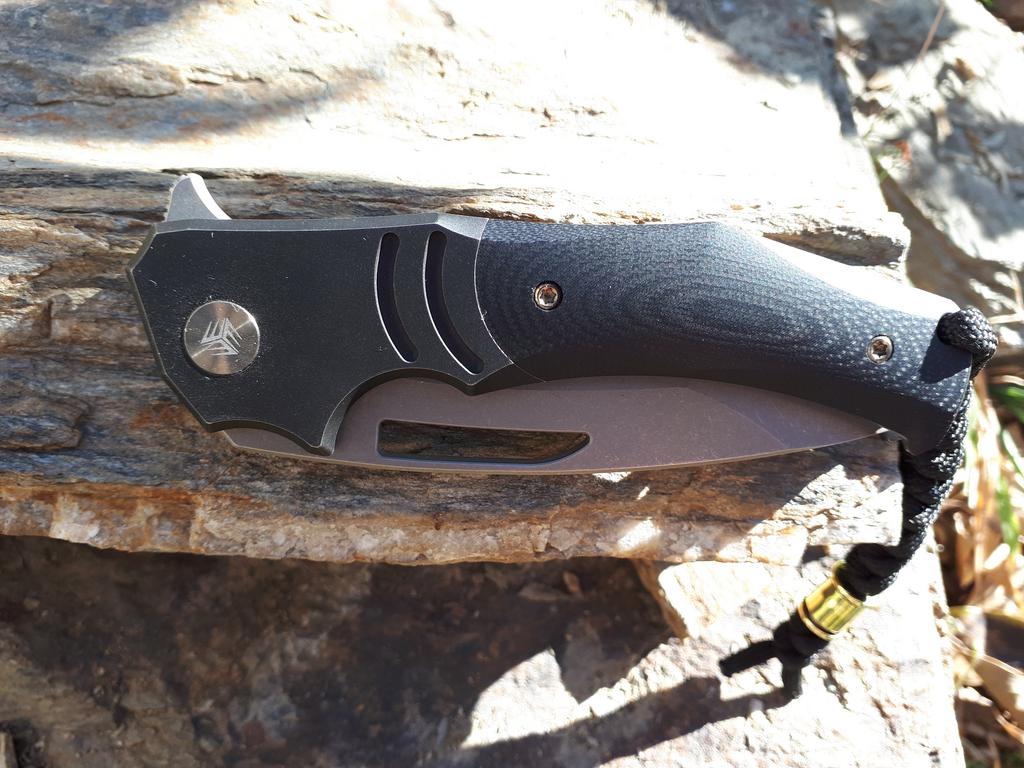 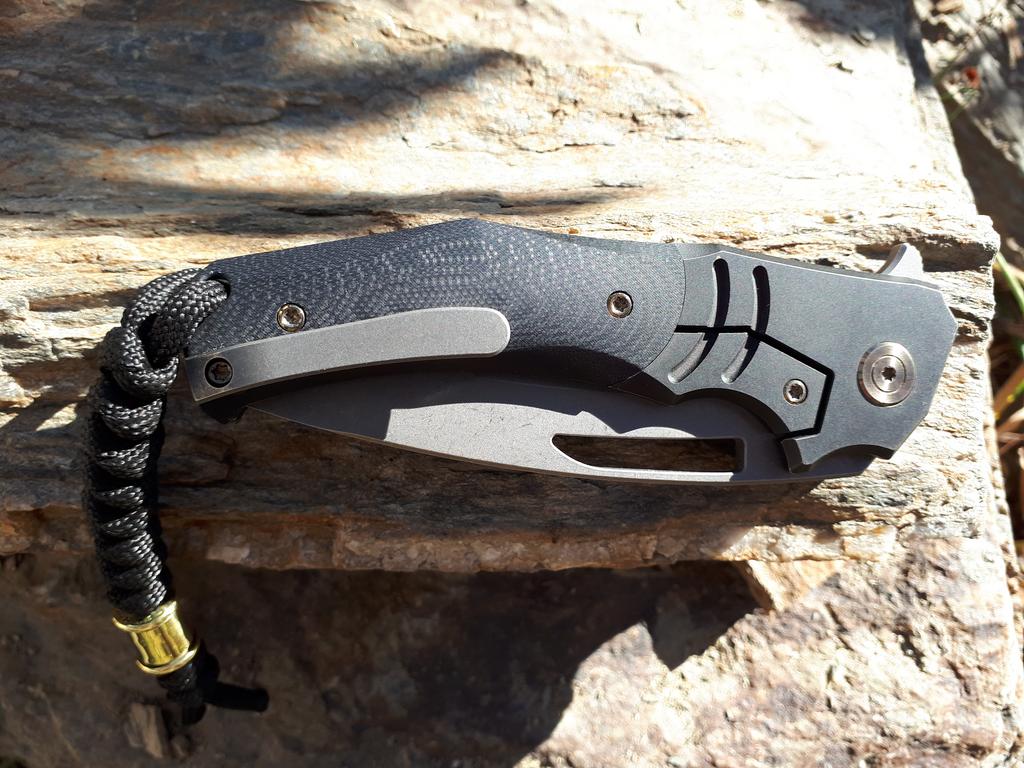 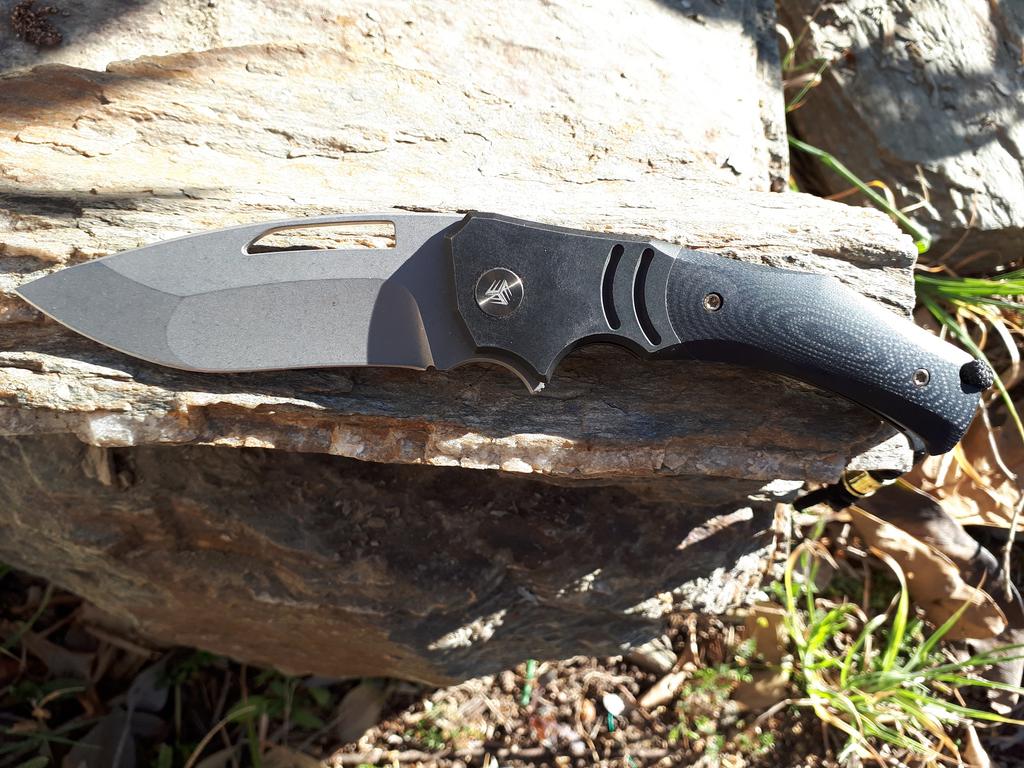 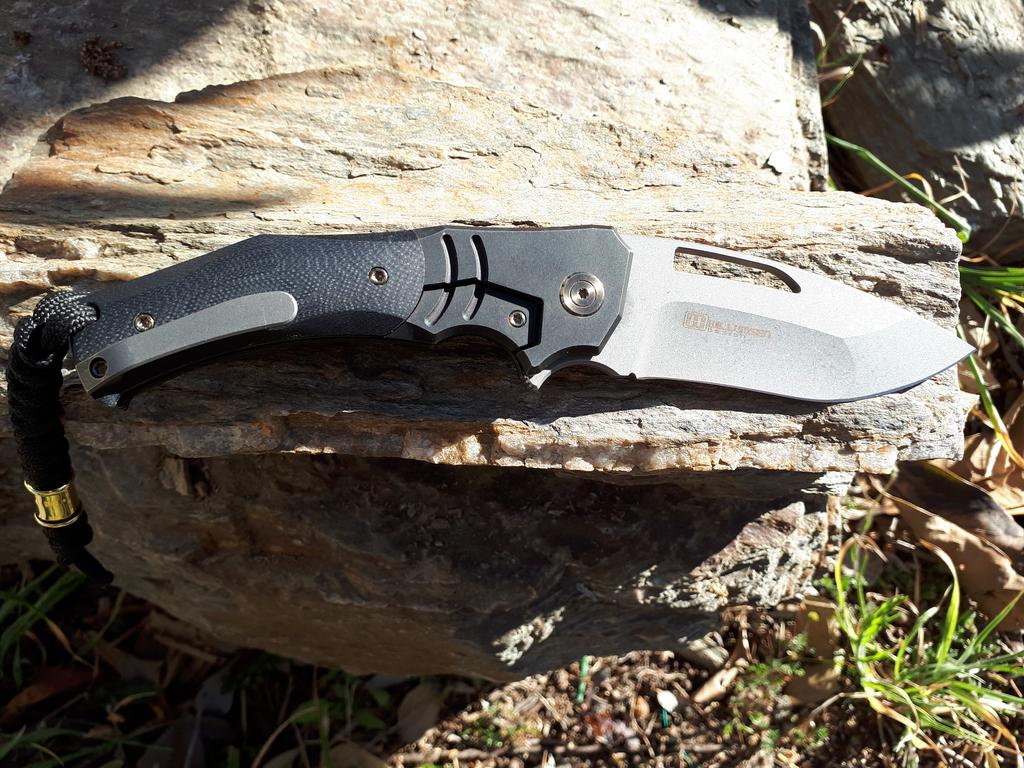 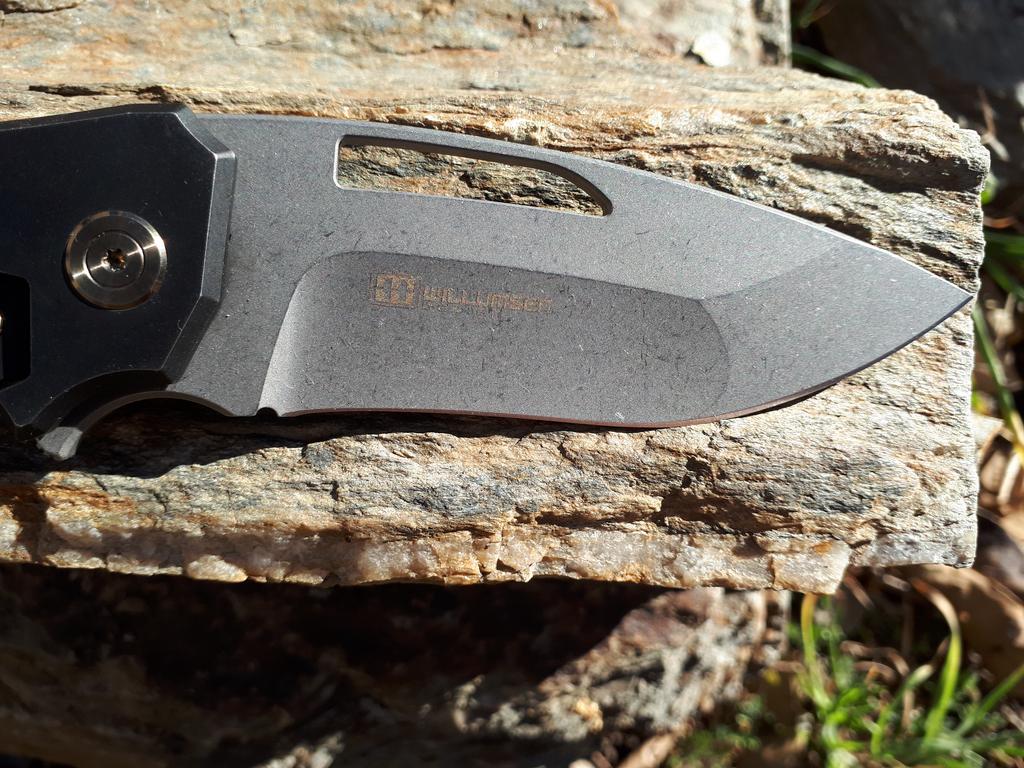 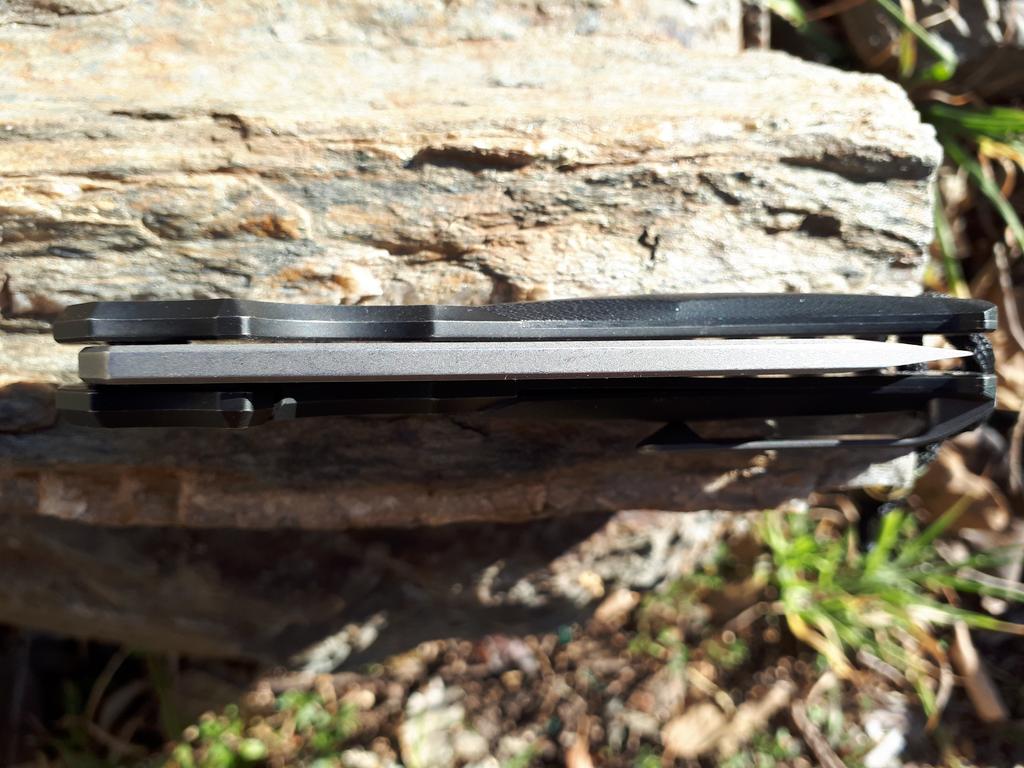 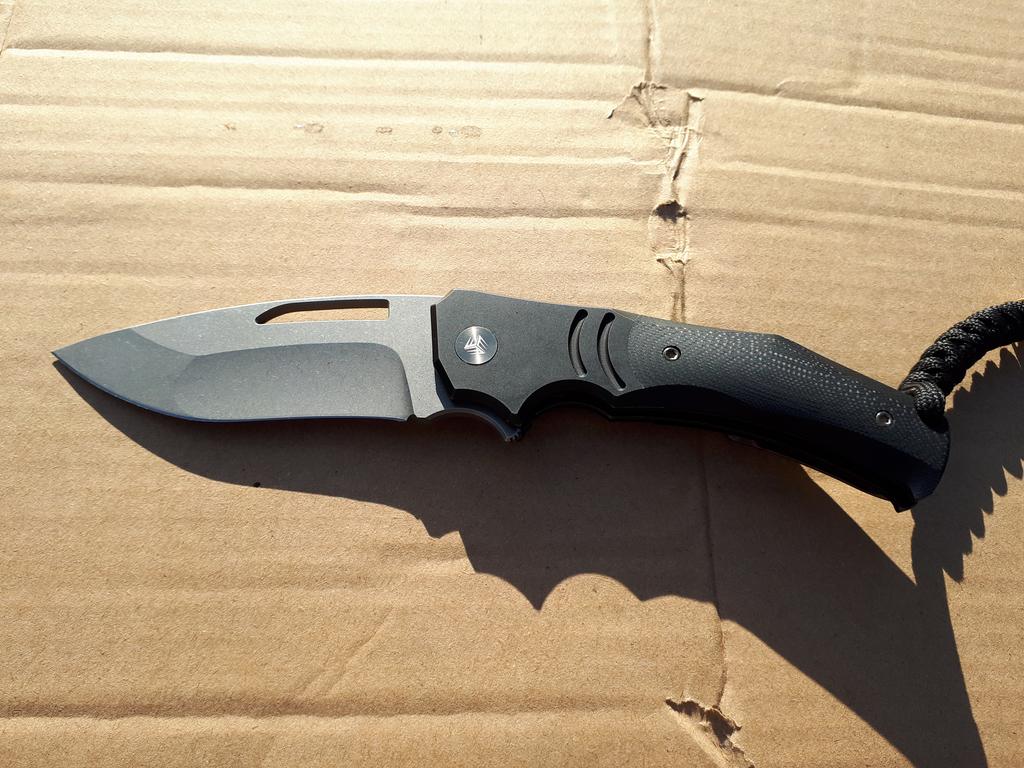 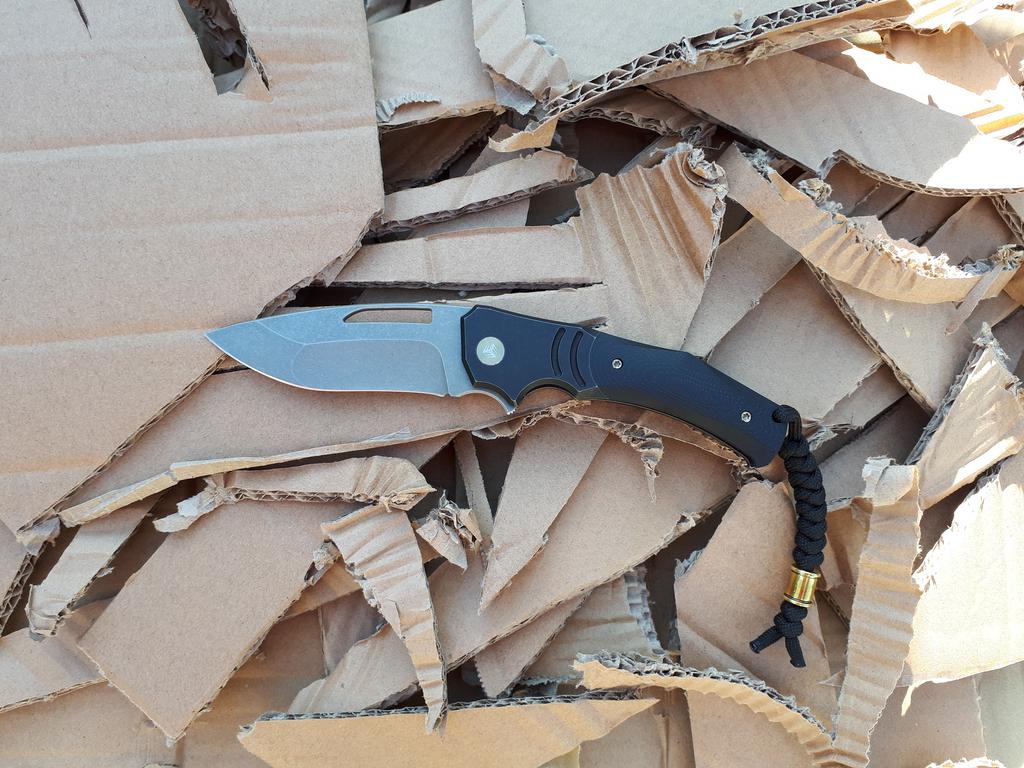 Conclusion The Jixx is a beasty, solid performing knife with outstanding flipping action. I love the way it fires and bought it mainly on that fact alone. It is everything I want from a Willemsen design and has all the features I require of an EDC pocket knife. I will say though, this is a very 'tactical' looking pocket knife, especially in the all black option and is all business, but for me that's part of its appeal.


For full disclosure I would also add I have XXL hands, and that must play in to my review process, and the readers should keep that in mind when reading my reviews and recommendations.
Lastly I ONLY use folding knives for light cutting duties, so I will not do 'hard use' cutting tasks with any folder, that's what I have fixed blades for, so cutting tests consisted of cutting paper, cardboard, packaging, paracord, some food prep (again, not a task I use folders for for the most part) and other duties a stay-at-home-dad would use a cutting tool for around the house.
R

The blade seems an organic engineering design, like our bones; beefy where it is needed, lighter (and better slicing) where strength isn't needed as much. It seems to answer the US knife crowd's differing desires of tactical and everyday useful. Although even with everyday use I suppose when you use the flat grind part, that's where you tend to apply more pressure slicing things on a board, boring holes or divots etc. It's a smart design. Blade design is really evolving. Thanks for the review
Last edited: Aug 31, 2019
You must log in or register to reply here.
Share:
Facebook Twitter Reddit Pinterest Tumblr WhatsApp Email Link
Menu
Log in
Register
Top