Here is my video Overview of the Miguron Centurion, a written review to follow in a few days time. My birthday upset my timetable.

Wave Man said:
Here is my video Overview of the Miguron Centurion, a written review to follow in a few days time. My birthday upset my timetable.

A belated Happy Birthday, I hope you had a good one.
Regards, Keith.

Here's my written review of the Miguron Centurion, sans cutting, I will add in my thoughts on the knife's cutting performance later in the week as I burnt my hand last night and have done some cutting tests but not all of them so I want to give myself a chance to heal up a bit. This is the second of three knives sent to me for review purposes by True Talon. I have decided to slow up a bit this year on reviews, this will be the last lot of reviews I will be doing for a few months. I still want to do them, just not back to back like I was doing them last year.

What the company says
The CENTURION
Designed by Sam Tuo and Scott Lawson (manufactured by Tuya Knife)
Centurion is a Latin / Roman name for the commander of a standard section of 100 men of the Roman Army. The Centurions were tough career soldiers who led from the front of the battle and were often rewarded for their heroism.
With a spear point 3.75 inch M390 blade it will cut fast and true. A great size for an EDC knife.
The titanium handle features unique shredded carbon fiber inserts in grey, red or blue. The black anodized titanium fittings finish off what is a great knife from Miguron Knives.
Flipper, ball bearing action. Steel Lock Insert.

Pricing from True Talon is $400

The Miguron Centurion ships in proporitory zipper plush lined pouch with microfiber cloth along with a certificate of authenticity and True Talon patch. I am pleased that the numbers match, and you can find the company's name and knife's number on the inside of the backspacer. I also like that the knife ships with this certificate as it adds a nice touch of class.
These knives are manufactured by Tuya knives for Miguron and the Centurion is the first knife Miguron has developed. The knife is designed by Sam Tuo and Scott Lawson and follows the usual design for a frame lock flipper.
These knives are offered in three versions, all feature shred carbon fiber and there is a grey, blue and red version. The shred carbon fiber is done quite well done, the review knife only had some small hiccups in the CF but overall visually very nice to look at and it really added to the overall appeal of the knife's looks. The Centurion to my eye is a visually stunning piece.
Hardware is all torx #6 and the pivot (both sides) is torx #8. There is a lock bar insert that incorporates an overtravel stop. No weight relief has been done though the carbon fiber panels act as such. The short backspacer wraps around the back of the knife and incorporates some jimping and the carbon fiber panels have cutouts that form extra jimping as well on the backspacer as well.

I miss the fact that there is no lanyard hole was included even though there was plenty of space for it on the backspacer.

The milled pocket clip is set up for right hand tip up carry only, and it works well, has good retention is reasonable deep carry with only a bit of the handle being exposed when in pocket. The clip is held by one screw.

Opening the knife is easy, you can either flip it or thumb it as either works fine. The flipper tab has jimping and the Centurion works as a light switch flipper and is a bit swing gaty in its action but if you do your part it works well. I did fail it several times but you have to work at failing to fire it. The detent has been set up so the thumb studs work as well and while I loath using them I found I could open the knife using the thumb studs just fine. It's a smooth knife and the review knife dropped shut easily once you got the blade over the detent.

The thumb studs and around the pivot are colored gold which add a nice contrast to the rest of the theme of the knife which I like.

Bohler's M390 was chosen for blade steel, and it was given a compound grind and a satin finish. A choil has been included, though it is not big enough for me to use it as a finger choil which is a little disappointing as there has also been a thumb ramp included on top of the blade which I found perfect for a saber grip. Using the knife I instinctively always wanted to go into the saber grip, with my thumb on the top ramp, which it is fine but I also wanted to sometimes choke up and utilize the choil but unfortunately it is too small.

The build quality is very good, the blade is well centered, there was no blade play and I could not detect and lock rock. Lock up at around 20%, at about what I consider the minimum I would want it.

The Centurion is a large knife and fits my hands very well and I get a good grip on it, and with the top ramp on the blade I naturally fall into the saber grip and tended to use that grip most of the time with this knife 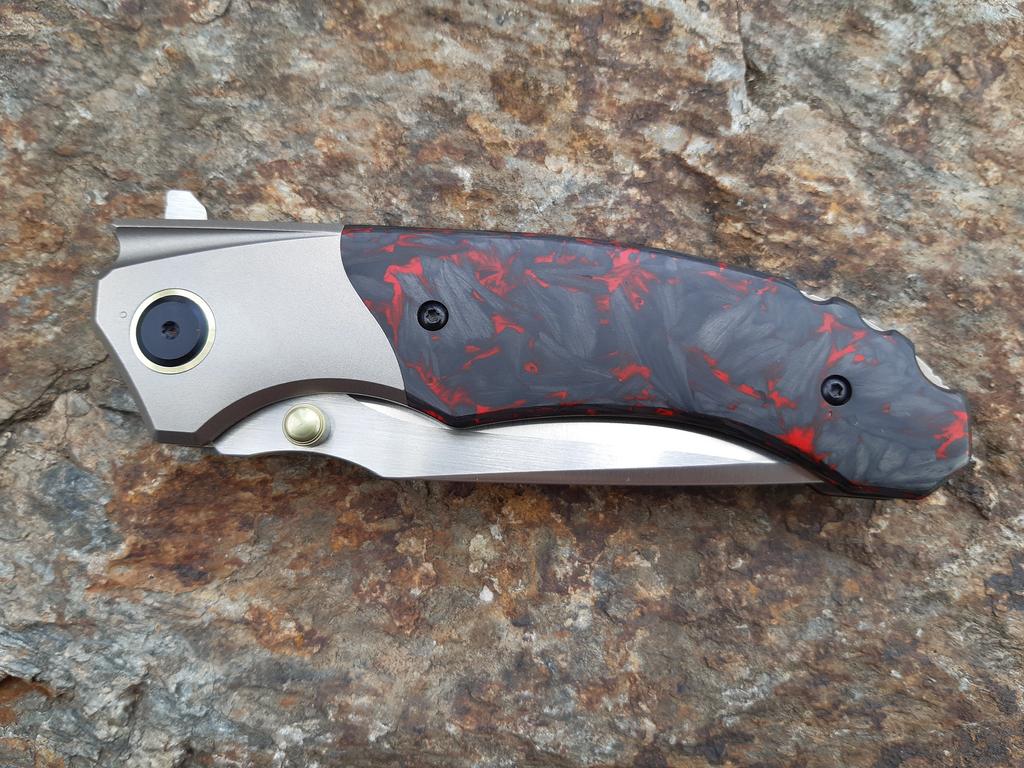 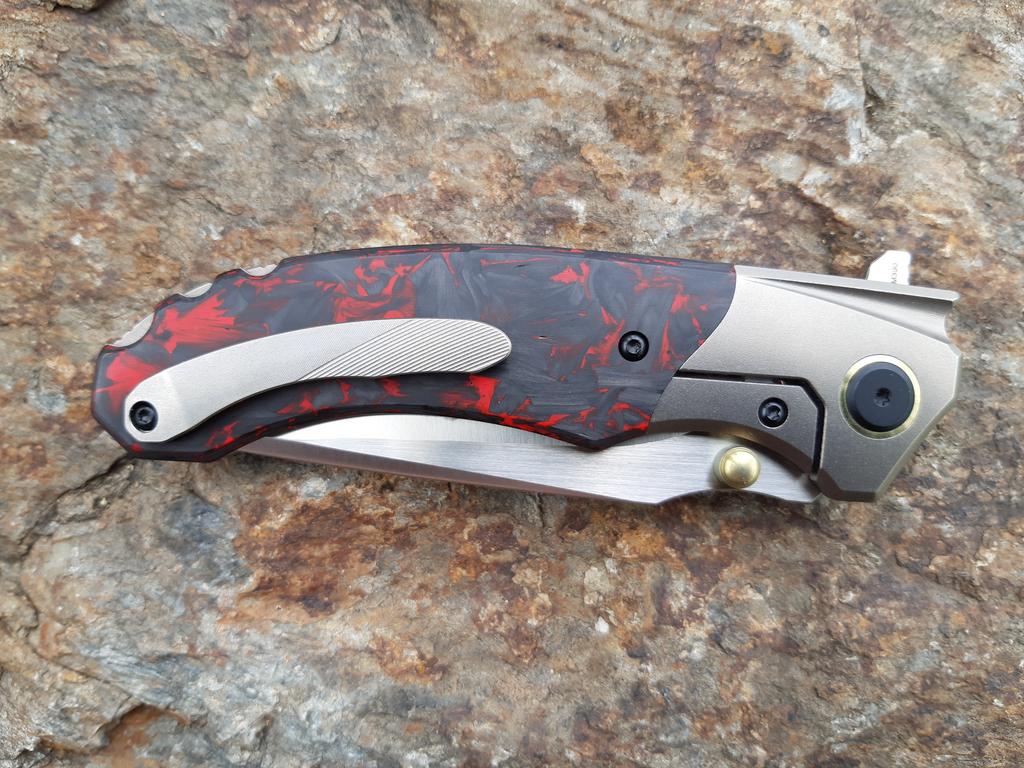 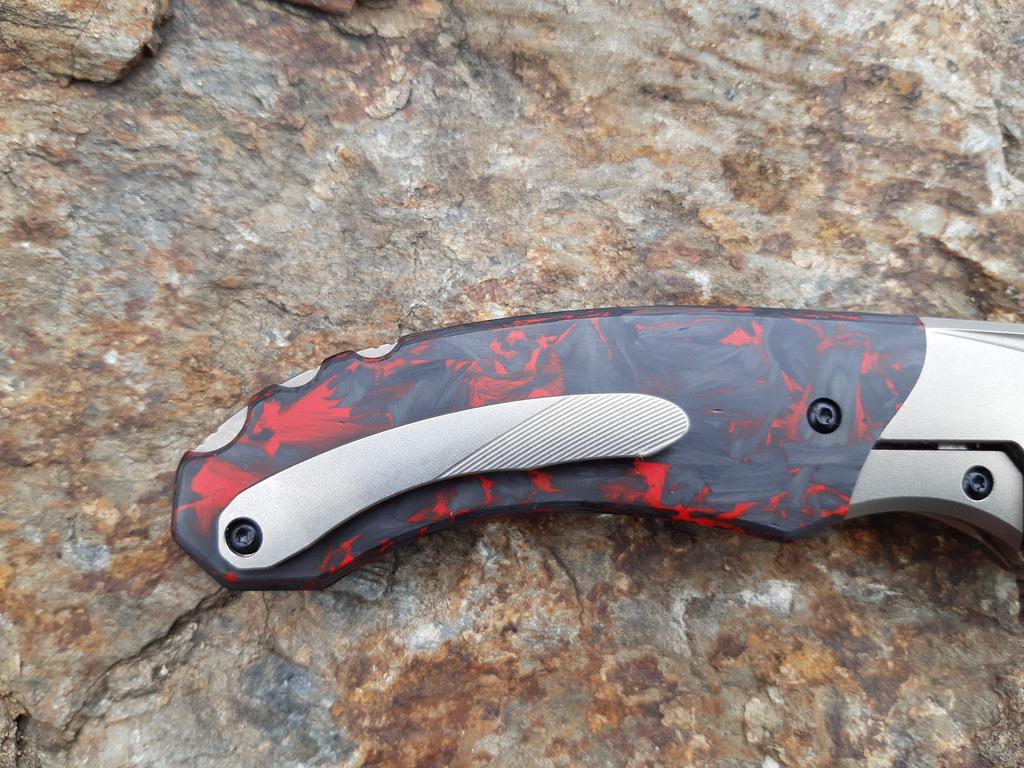 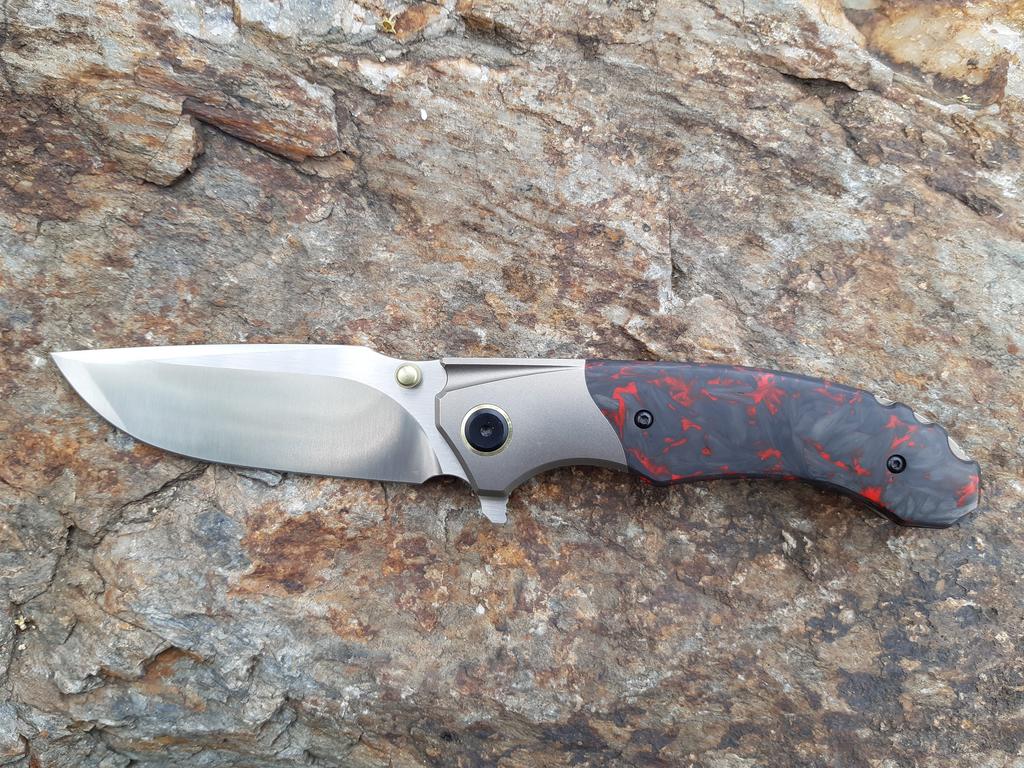 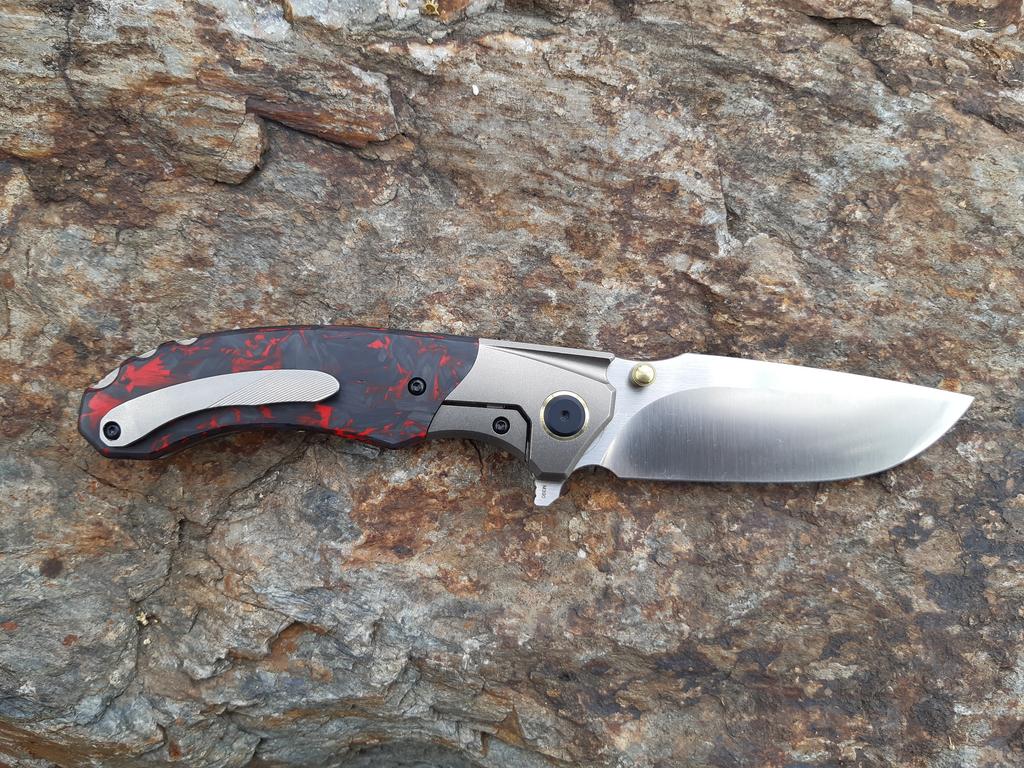 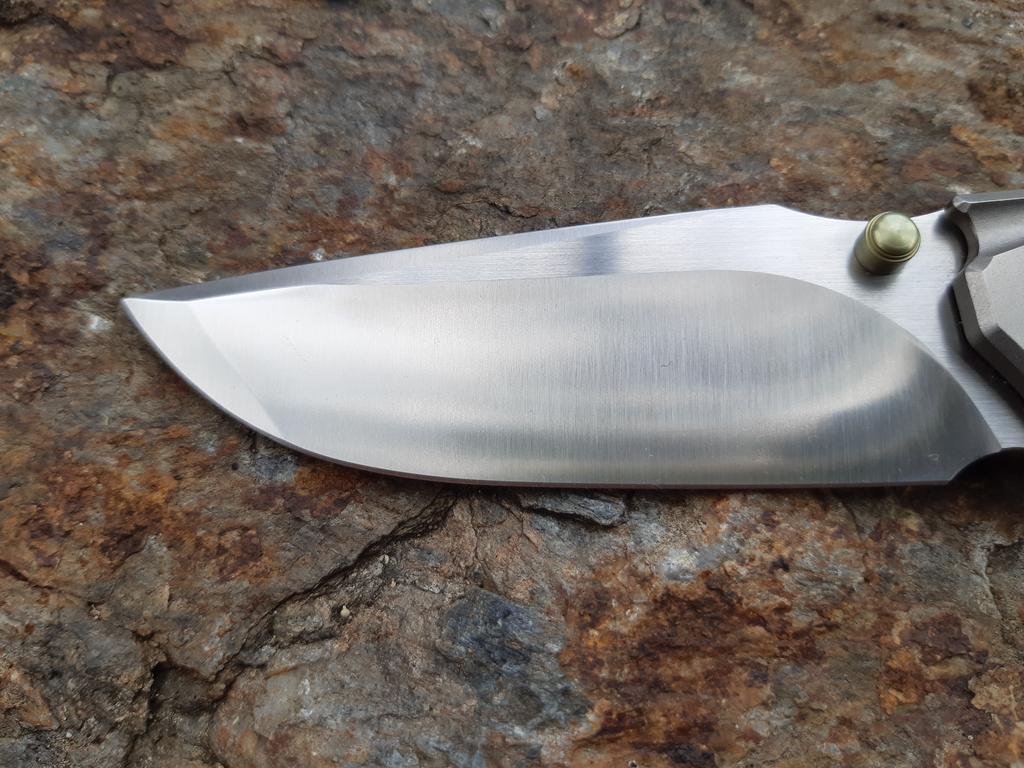 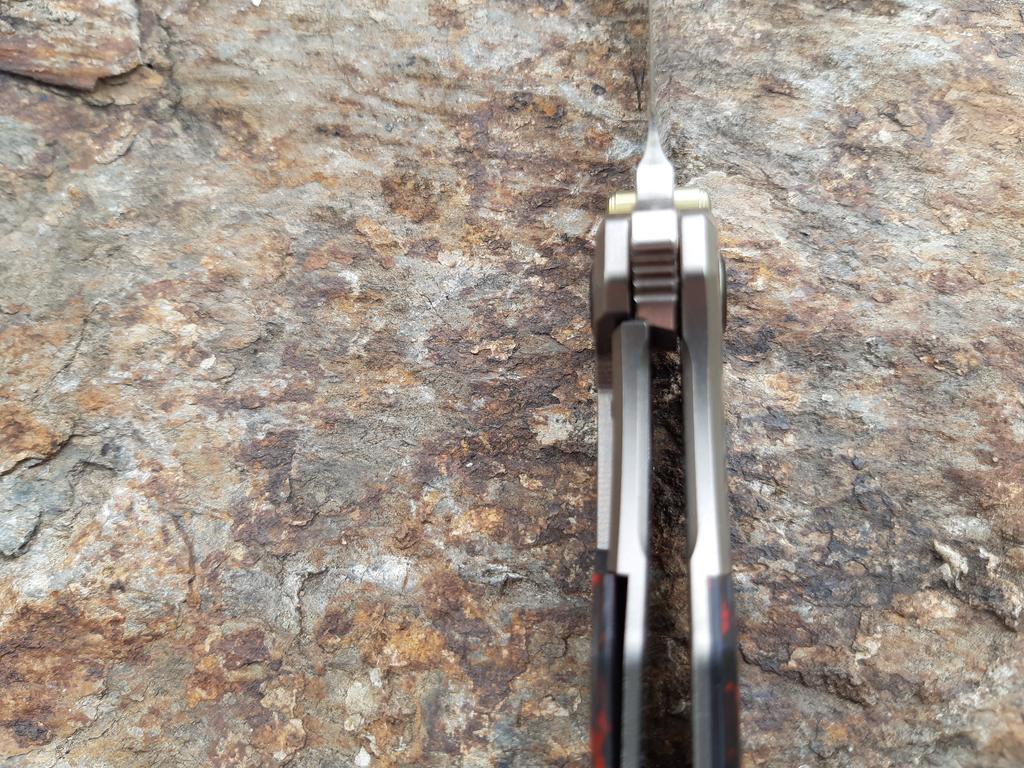 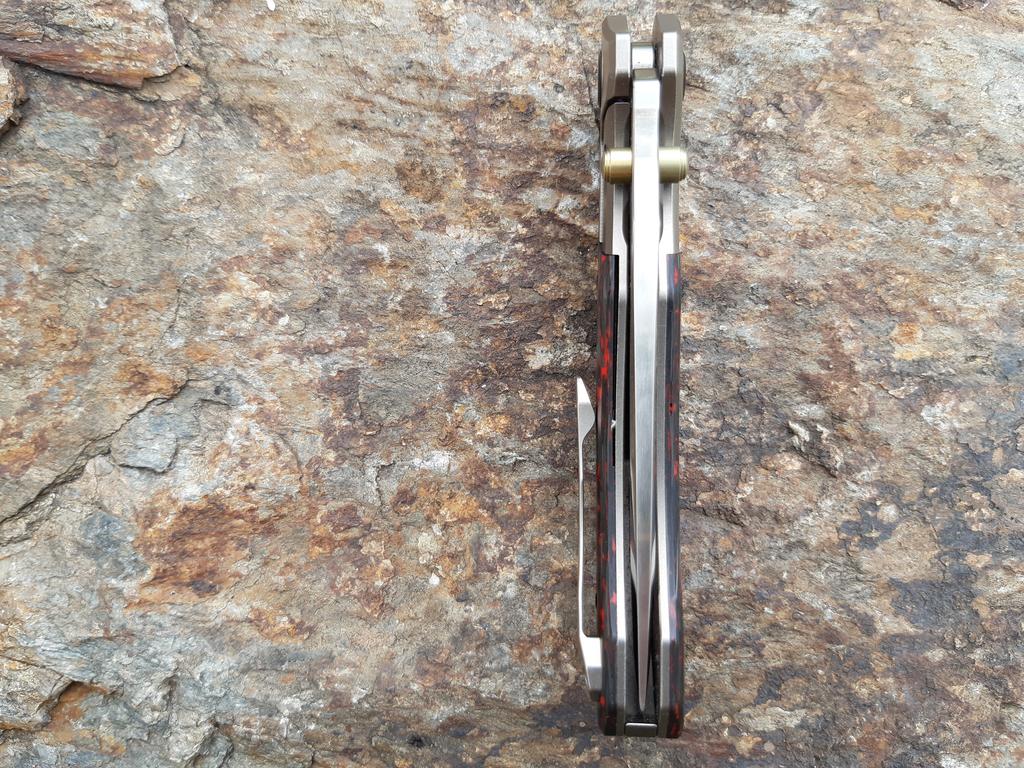 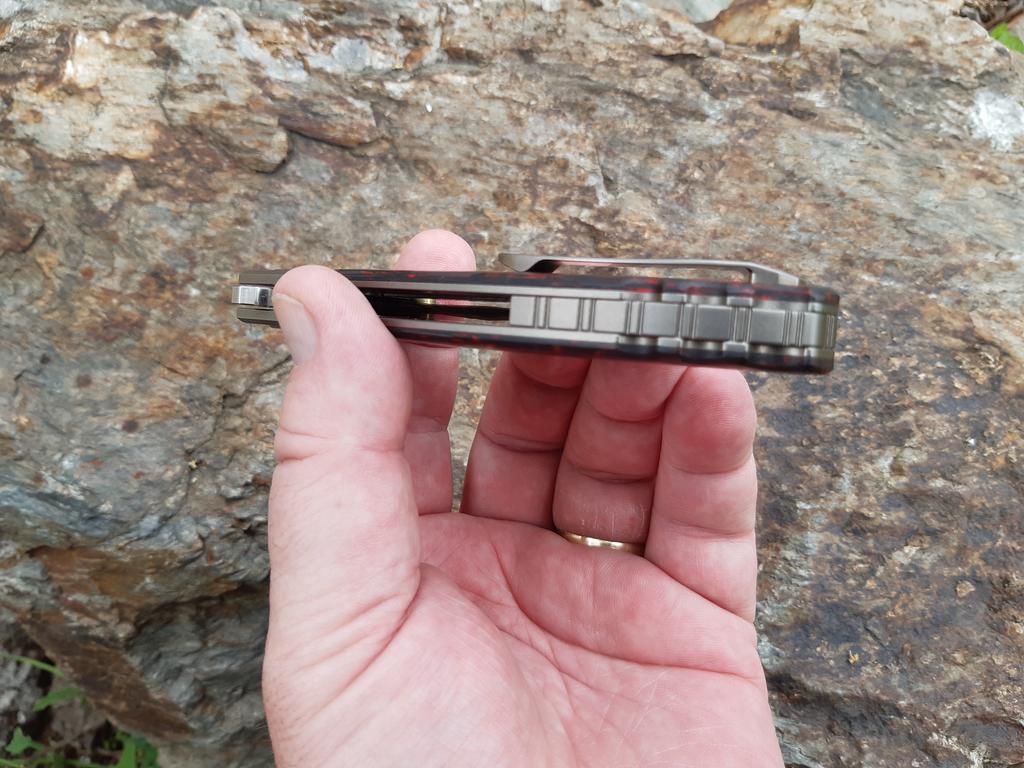 Conclusion, A visually handsome knife that fits my XXL sized hands well. If only the Centurion had a few other options so as to fit into my particular criteria for a EDC knife I would have picked one up. A very solid knife for a first production offering.

Cutting, The Centurion was not delivered very sharp from the factory, it would not cut phone book paper effectively nor shave arm hair. This was the first review knife I have touched up on the ShapeMaker first before starting my cut test and it still had a perceptible wire edge that I could not eliminate before starting my cutting tests, and I found this affected my cutting tests.

If it was my knife I would do a complete resharpening straight up before carrying the knife as it needed it IMHO.

Cutting cardboard was disappointing. Ergos were excellent, but there was bunching and a lot of ripping rather than cutting/slicing. I ending up doing very little cutting with it as I saw little point in persisting in the testing. I think if the Centurion had a screaming 17 degree/side edge it would perform admirable but as delivered from the factory it is at best poor (well at least the sample review knife was)

notice all the ripping 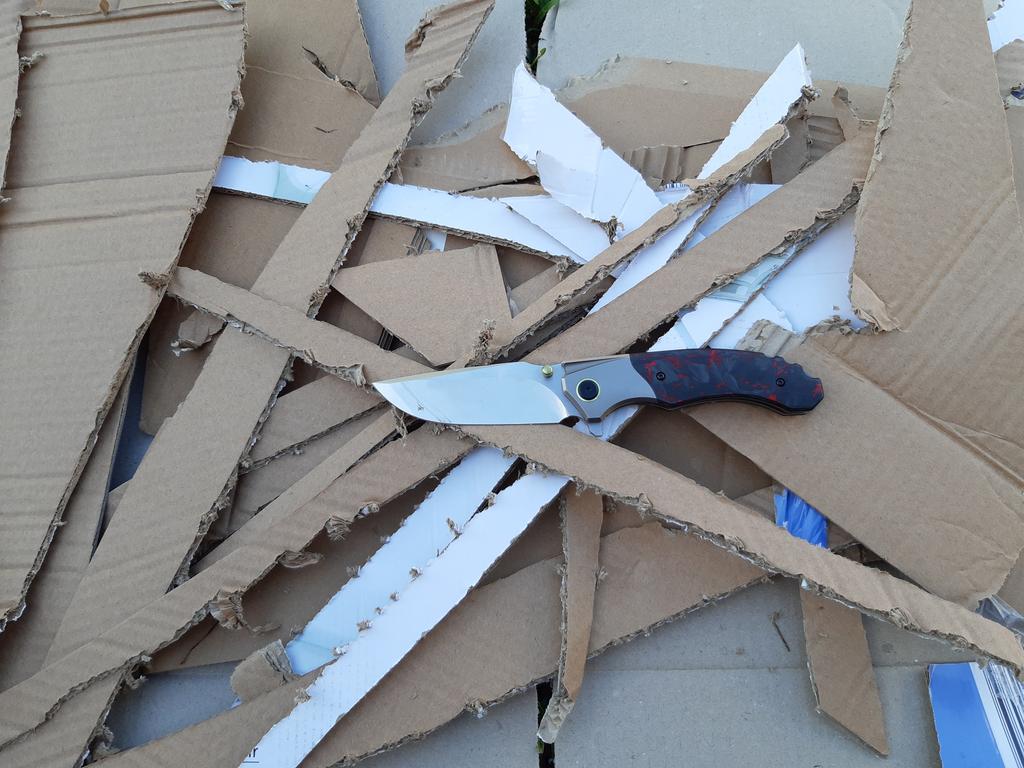 Con's no lanyard (for me), no left hand carry option, light lock up, lack of keeness from factory

1-5 star system 1 star poor/fail 2 star below average 3 star average 4 above average 5 star excellent
Hands on/Ergos 5 (for me and my XXL sized hands)
Materials/Features 5
Build Quality/Fit and Finish 4 (reduced for lack of keeness from factory, I had this at 4.5 but reduced after cutting)
Value/Price point 4.75 (price has been reduced as the dollar has recovered somewhat, I had originally put this at 4.5)
Aesthetics 5
Over all (average of all above) 4.75

For full disclosure I would also add I have XXL hands, and that must play in to my review process, and the readers should keep that in mind when reading my reviews and recommendations.
Lastly I ONLY use folding knives for light cutting duties, so I will not do 'hard use' cutting tasks with any folder, that's what I have fixed blades for, so cutting tests consisted of cutting paper, cardboard, packaging, paracord, some food prep (again, not a task I use folders for for the most part) and other duties a stay-at-home-dad would use a cutting tool for around the house.
R