my current striker collection as it stand today, I still have 6 in transit and have a small list of around 5 that I still want to get, a couple of customs and a few productions.

I will eventually end up buying several more big pieces of flint of Mark, the large pieces I have weight 82.85g and 59.02g respectively, and they are about as big as I require, so a 3000g piece could produce several of these large pieces and while I have 3 large pieces now I would love to have 6-8 total of these big pieces on hand, just so I know I have enough to cover all of my needs.

These big pieces are simply better IMO for me and my style, easier to handle and work with.

any here are my strikers 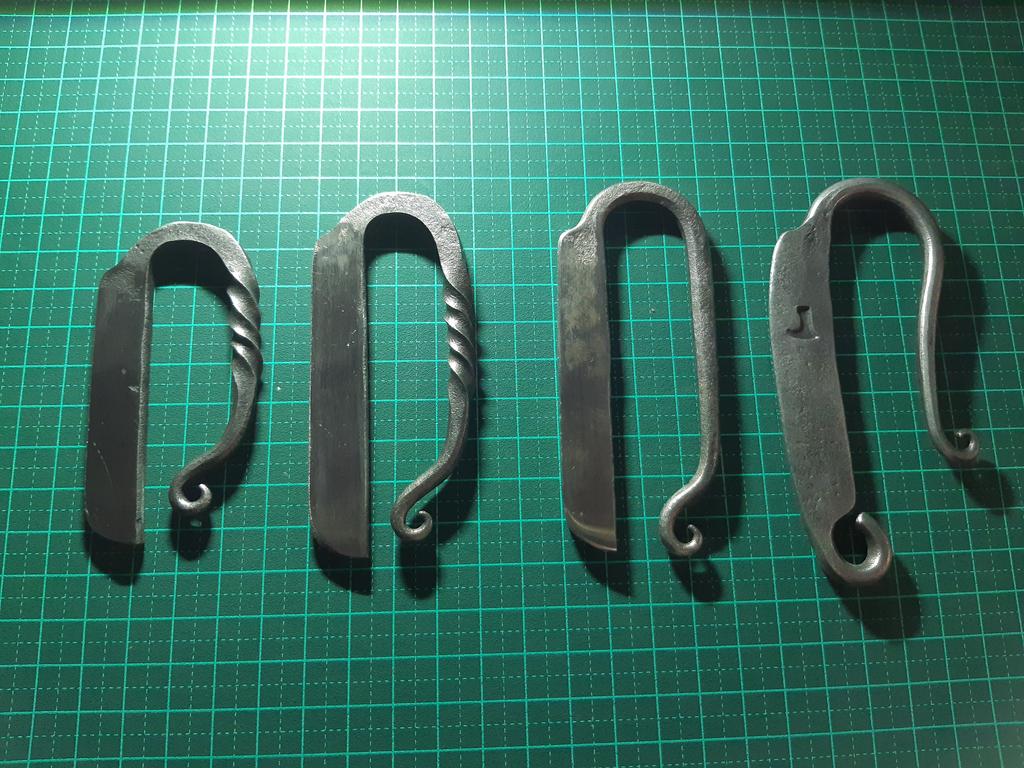 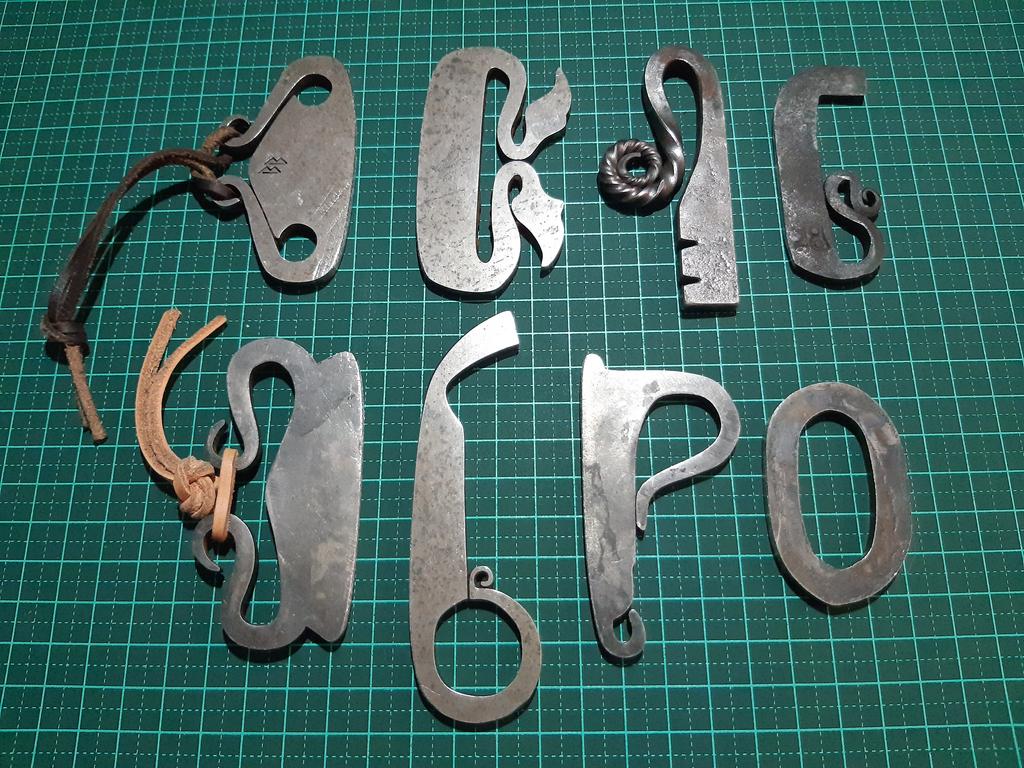 and various makers, including my oversized Cracked Anvil and BlackThorne Titanium and custom ferro rod/striker combo and file striker 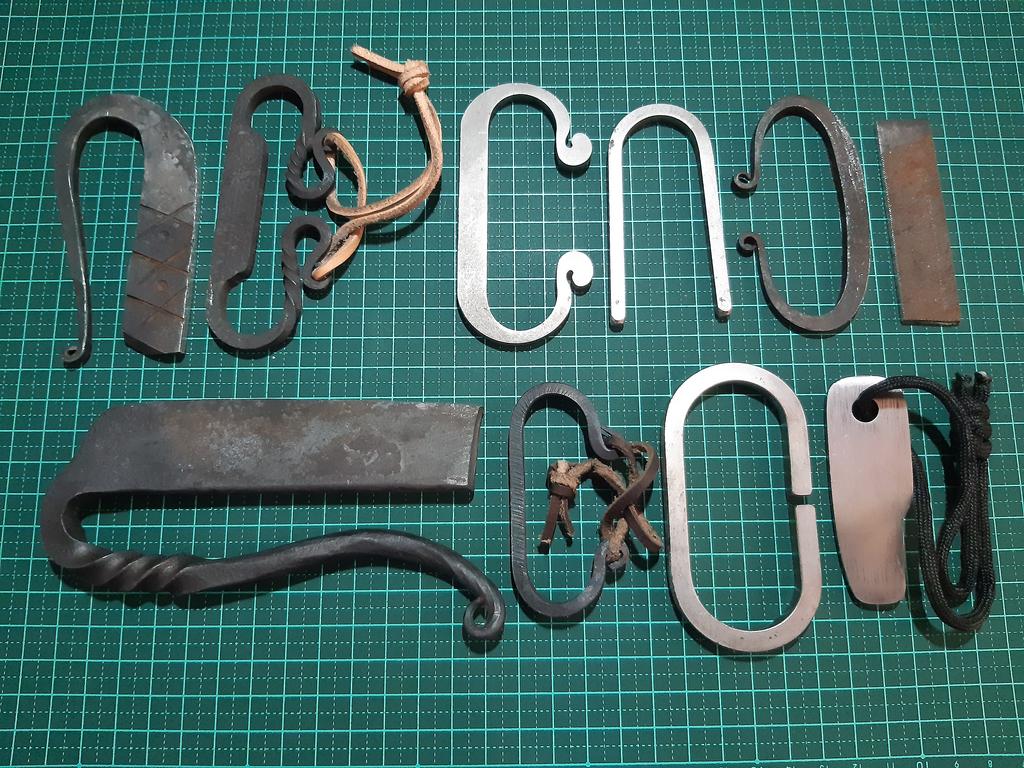 all of these strikers work well, though some work better than others, but I can easily get embers with any of them (and have done many, many times).

I now practice every night on the back porch, whether for 5 minutes or 20 minutes just fooling around striking steel against rock producing embers on char cloth. I do often use jute to make bird nests as well and blow the char cloth/birdsnest into flame.

Dave Canterbury said once that to consider you have mastered a skill you should repeat it 200 times successfully, and I took that to heart, and I believe over the last couple of months I have easily produced well over two hundred flint and steel fires
(well blown 200 bird nests into flame, and I believe I could easily produce a viable fire from there as I understand how to build a lay and it is a simple matter of putting that flaming birds nest into the fire lay and getting the fire going).

I know I easily produce embers now, often in a few strikes, and many times on the first strike, particularly with any of my OliveMead's and oversized Cracked Anvil striker.

If asked to choose just one striker for the rest of my life, hands down it would be my oversized Cracked Anvil striker, it would last me my entire life, sparks so well and was built to my specifications. I would add in all three lage flints, and the bag of reserve flints, just to be sure I had a large supply of flints, stripe out all of my tinder bundles (from all of my other flint and steel kits) and fill up a haversack with it all and know I had enough gear to last a good while.

my latest striker and probably one of the most exotic and unusual I have ever bought, plus a long wanted and awaited one.

M.O.A.B. Large High Grade buffalo horn handled striker, came with a very nice, large piece of flint, sparks well. Going to make a video on it now. Just made up a kit for it. Still waiting on some of that German premium lamp wick though included some rope lighter wick in there for the moment.

how it turned up, ruler for sizing, quite a large striker, good thick striking face. This was an expensive striker but worth it IMO. Already struck it and it sparks very well. 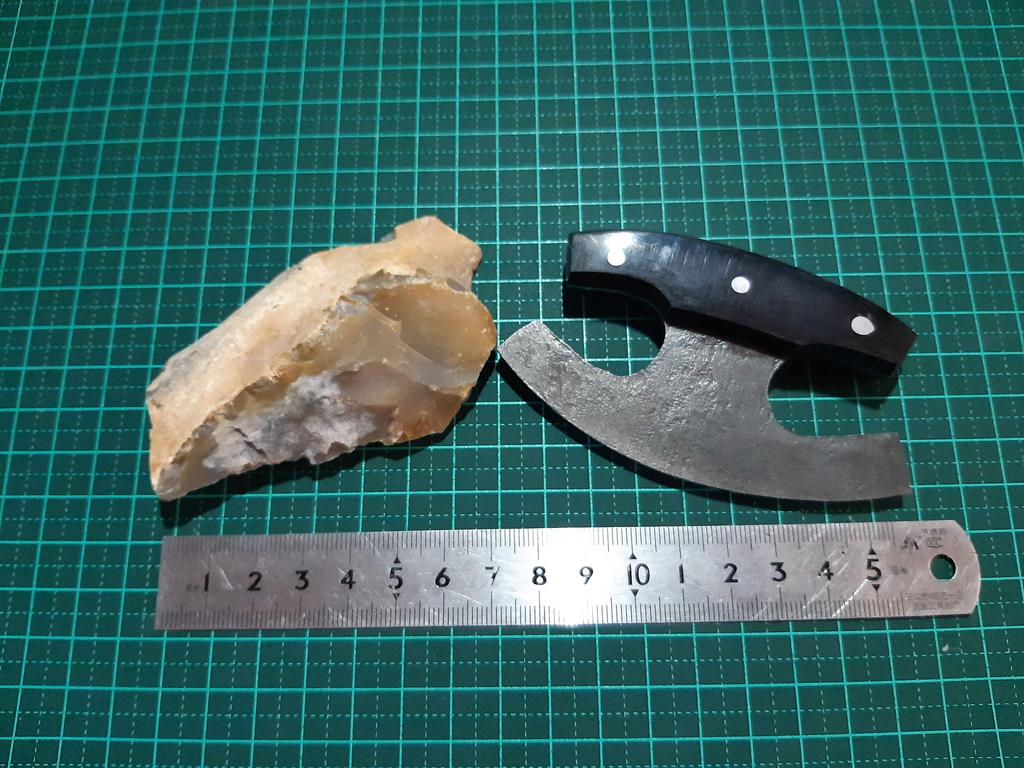 and the kit I put it together 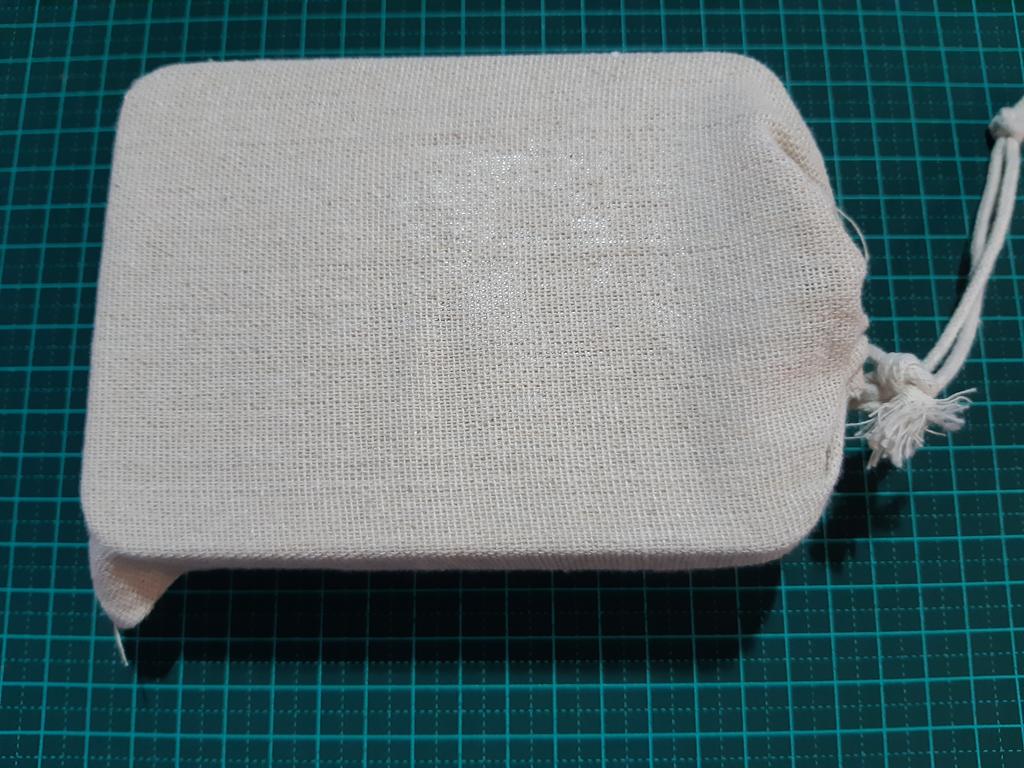 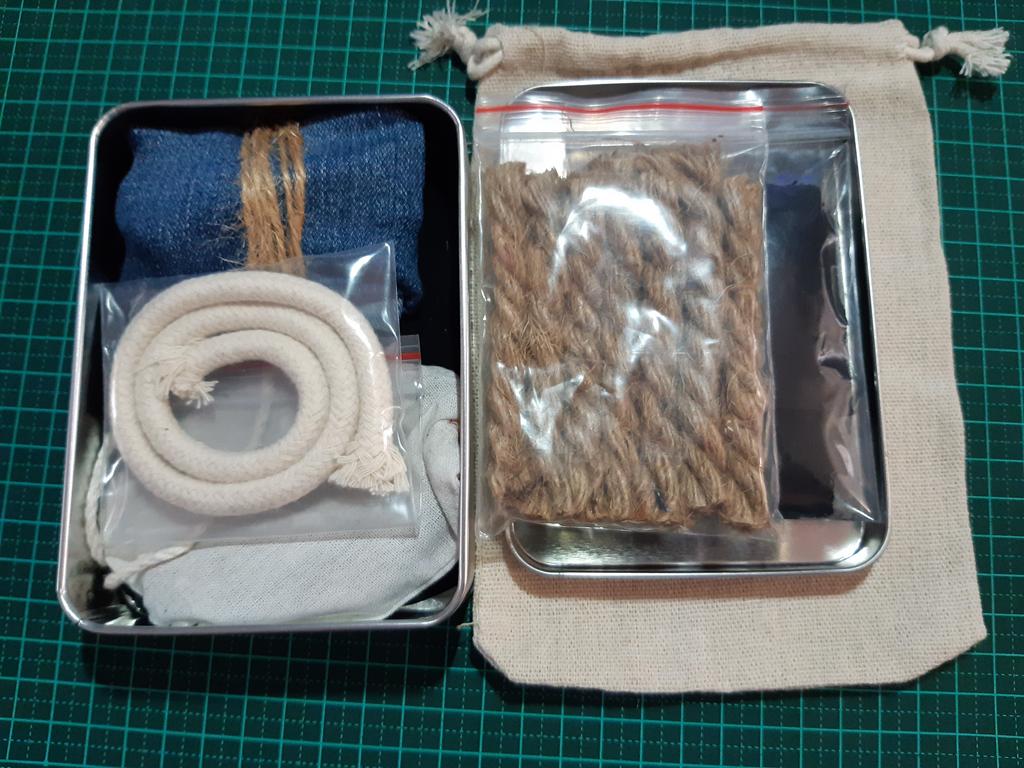 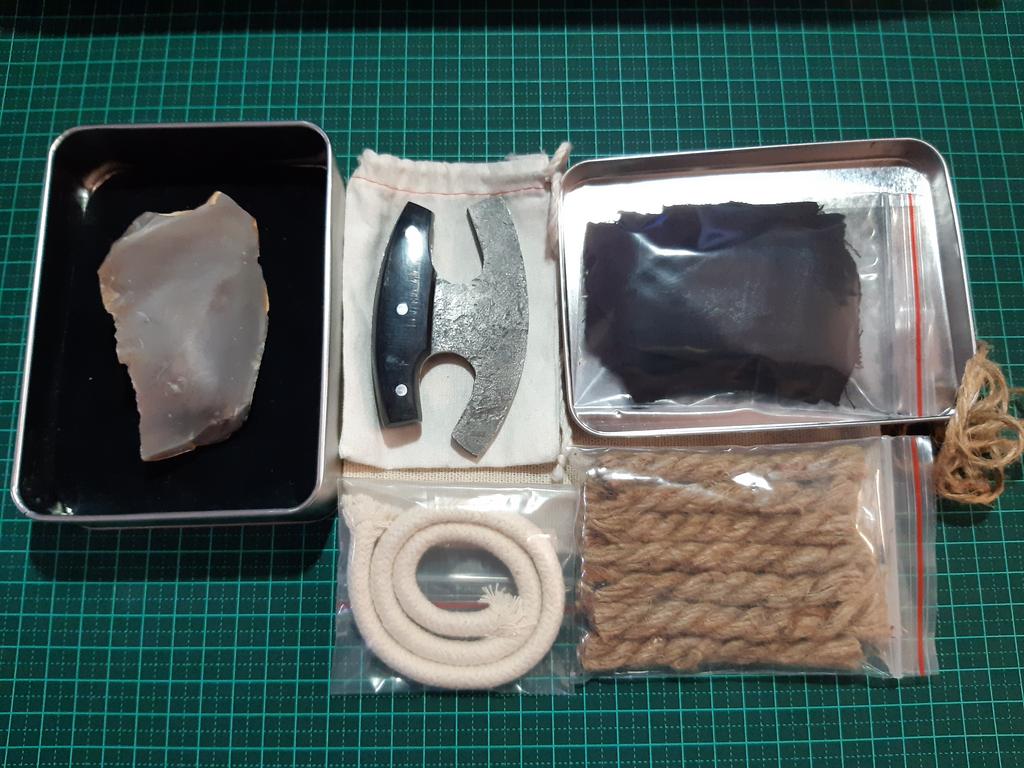 this one turned up today, from BeaverBushcraft, Curly tail R type, again Mark included extra flints. This striker is a lot smaller than I imagined and will take some getting used to, still I like it.

Looks like I am on a board force list now, as this package was also open for inspection, so I will be not opting for any exotic tinders from now on. 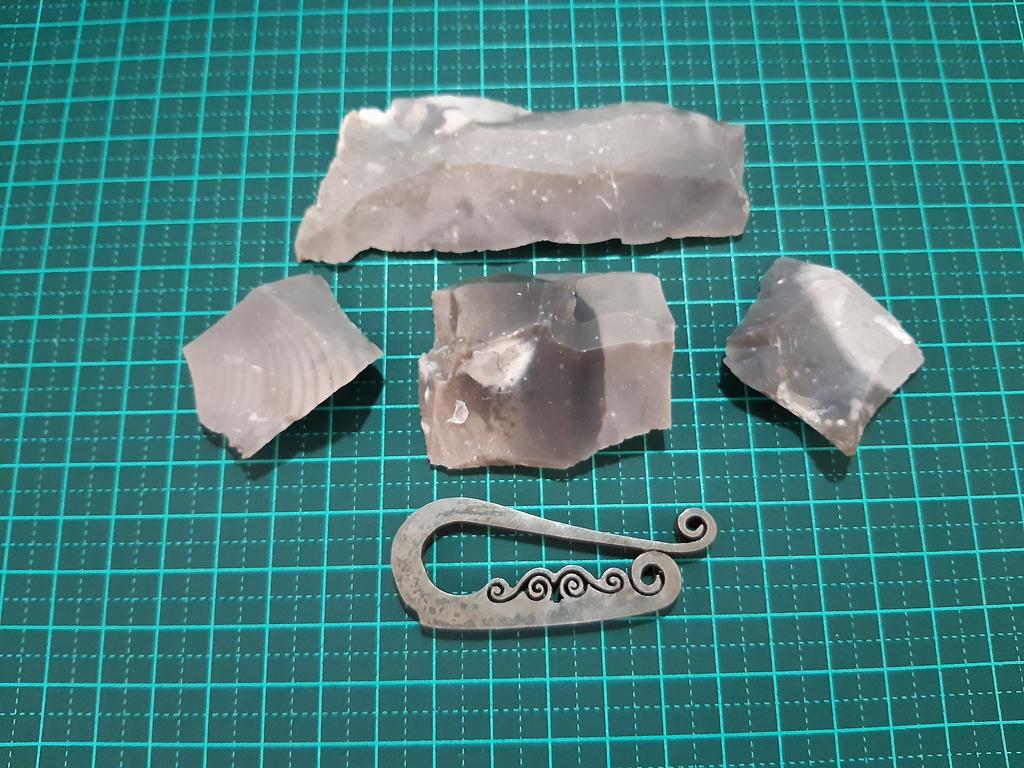 do you forge any yourself or buy them all? the first pic far right is my fav

Redline said:
do you forge any yourself or buy them all? the first pic far right is my fav
Click to expand...

I haven't forged any yet, though I have a mate that has a forge and I have several patterns I want to make and will eventually have made by him (with my help). I have "made" my own strike already though by snapping off a file, and running a Dremel over the edges to clean them up and it works as good as any of my bought strikers.

First pic, far right, OliveMead FS-5, yeah it is a beauty mate, the only thing I dislike about it is the strike face, which is a little thin for my liking. Other than that it is a brilliant striker, fits my hand well and sparks brilliantly.

I like a striker with a strike face that is thick, like a 1/4" strike face, from experience they produce the best/most sparks from each strike. Even though the FS-5 doesn't have a wide strike face it performs admirably, and sparks like all the other Olivemead strikers I own.

thanks for the link mate, its a very slippery slope me looking at things on ebay lol.

Redline said:
thanks for the link mate, its a very slippery slope me looking at things on ebay lol.
Click to expand...

yeah me too mate, that's why I have like 23 odd strikers and I don't know how many knives.....

latest one, turned up today, a fun purchase, Dragon Head striker from BeaverBushcraft, again Mark is always very generous with flints and I am, as always appreciative.

I have a nice piece of olive green leather on the way to make a possibles pouch up for this striker.

I love this striker, it is such a nice one, sparks really welly and is a bit of fancy. 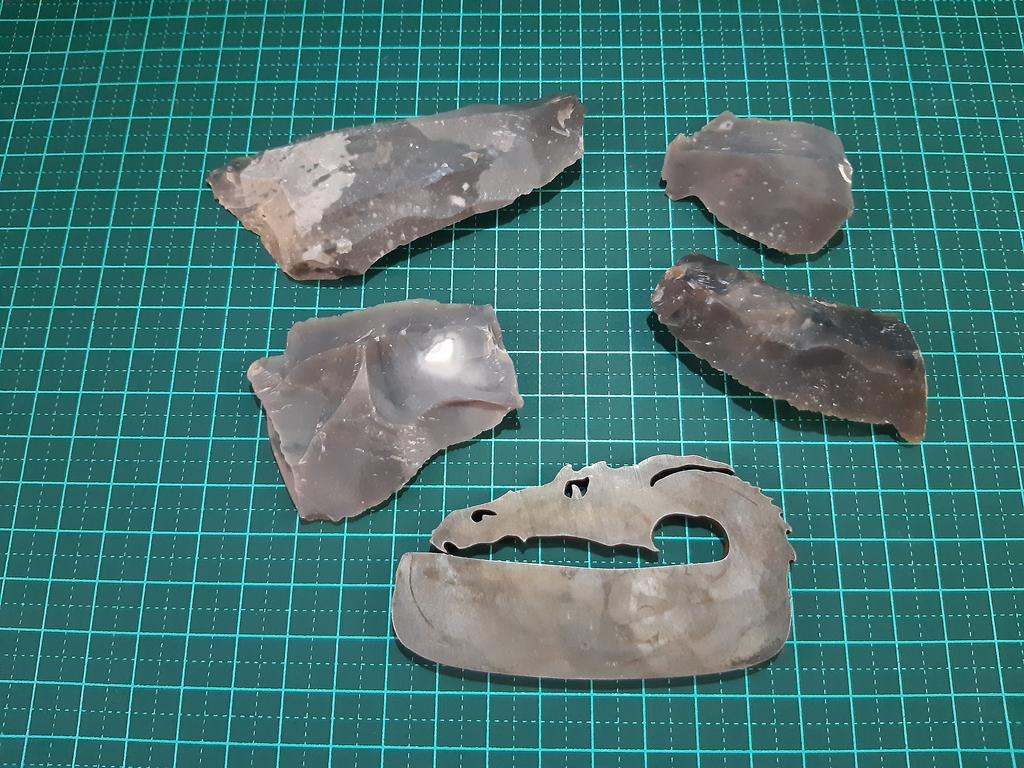 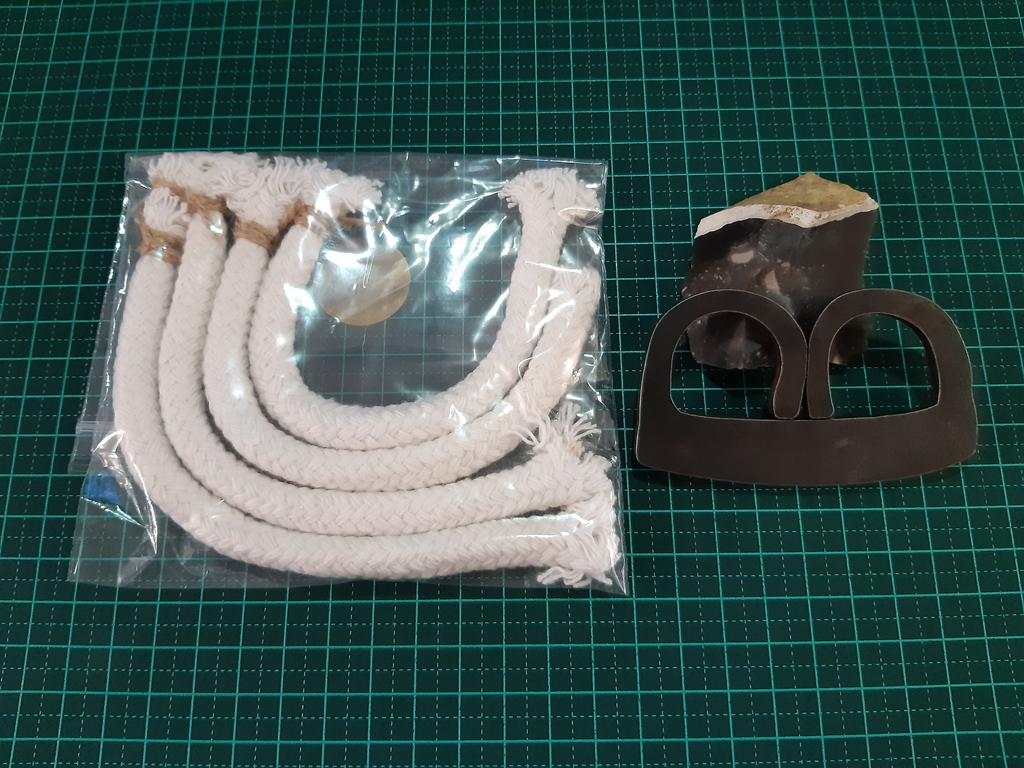 another BeaverBushcraft striker today arrived, this one took just over a month a come which is a long time as this one was ordered way before others (above) that arrived before this one. Leather laced and beaded striker, came with a very nice large piece of flint. 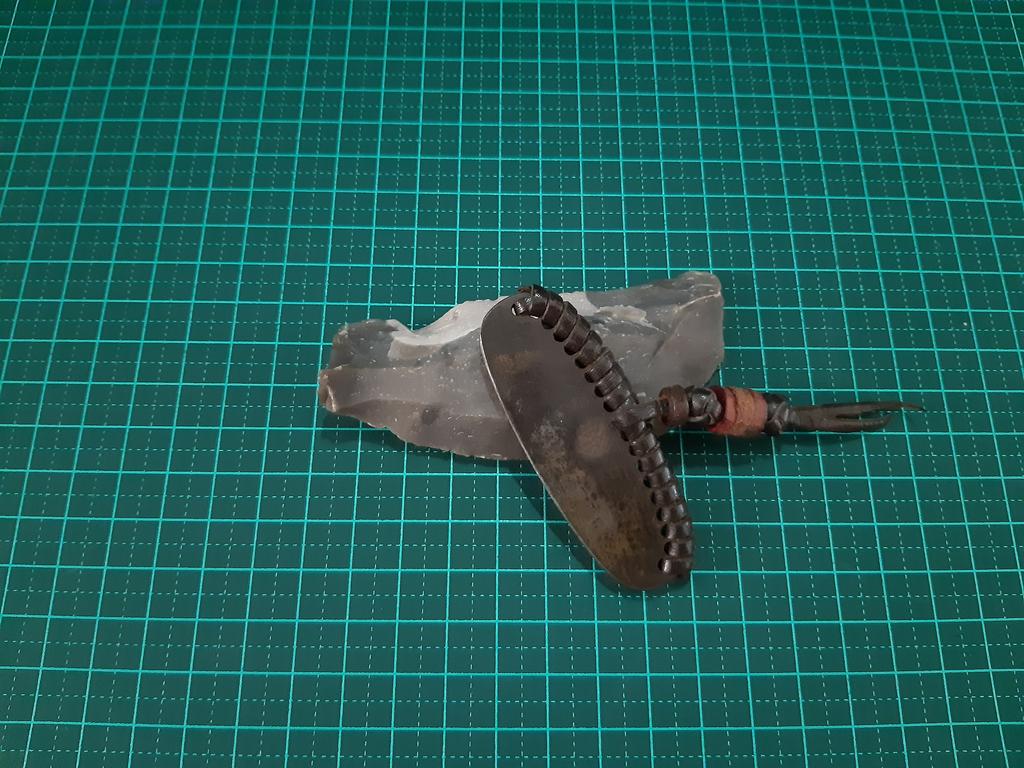 my latest from BeaverBushcraft, the Nordic Dragon, this was over a month in the mail. Sitting on the sami style kit I have made up for it 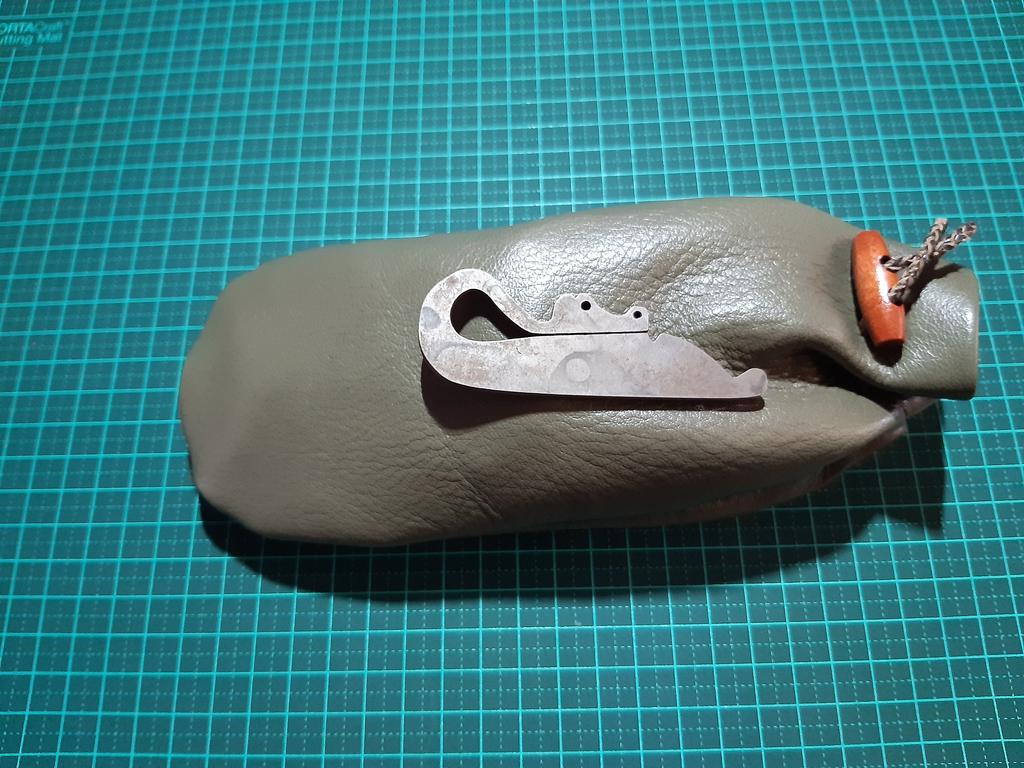 I bought this kit to test me and my skills with flint and steel, it is the smallest striker that BeaverBushcraft make and fits in this 1 3/4" tin. Kit came with a fair bit of sundries.

It normally comes amadou but I asked to have it removed so not to upset Border Force, Mark was again generous with flints. Mark replaced the amadou with Kapok and jute.

This is a very nice little pocket kit, and it fits in the palm of your hand.

I also got in more 6mm Aussie lamp wick. 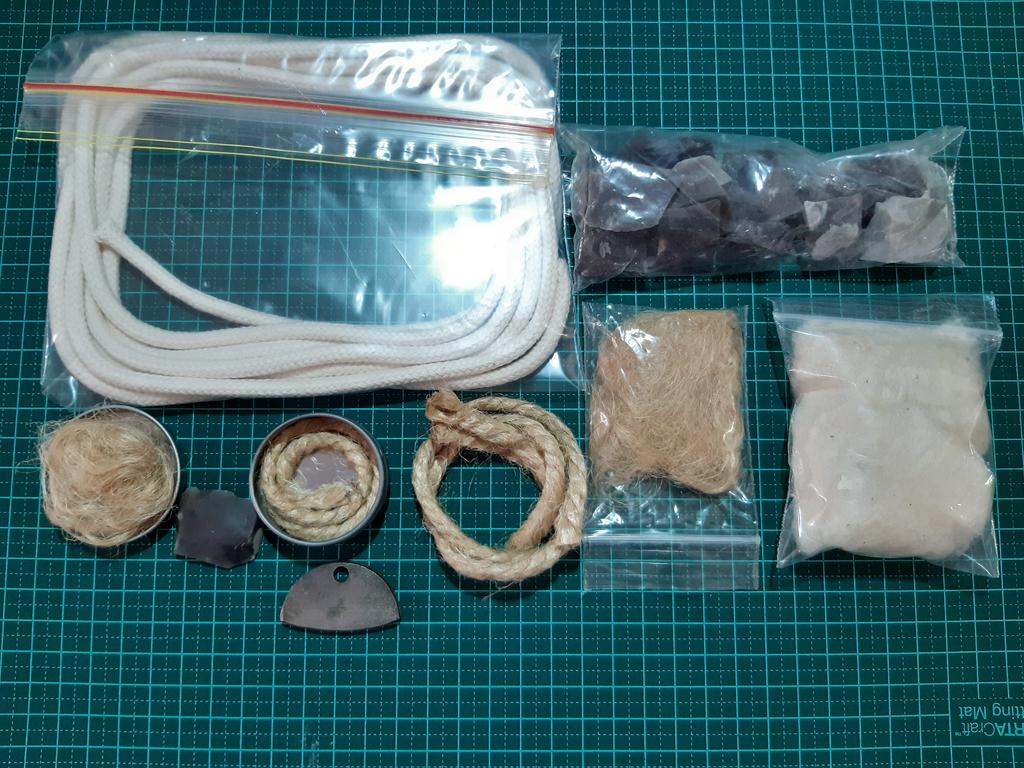 mini tinderbox kit sorted with a couple of pieces of amadou fitted (I have a fair few pieces on hand, though it is a finite resource, so I do not use it) 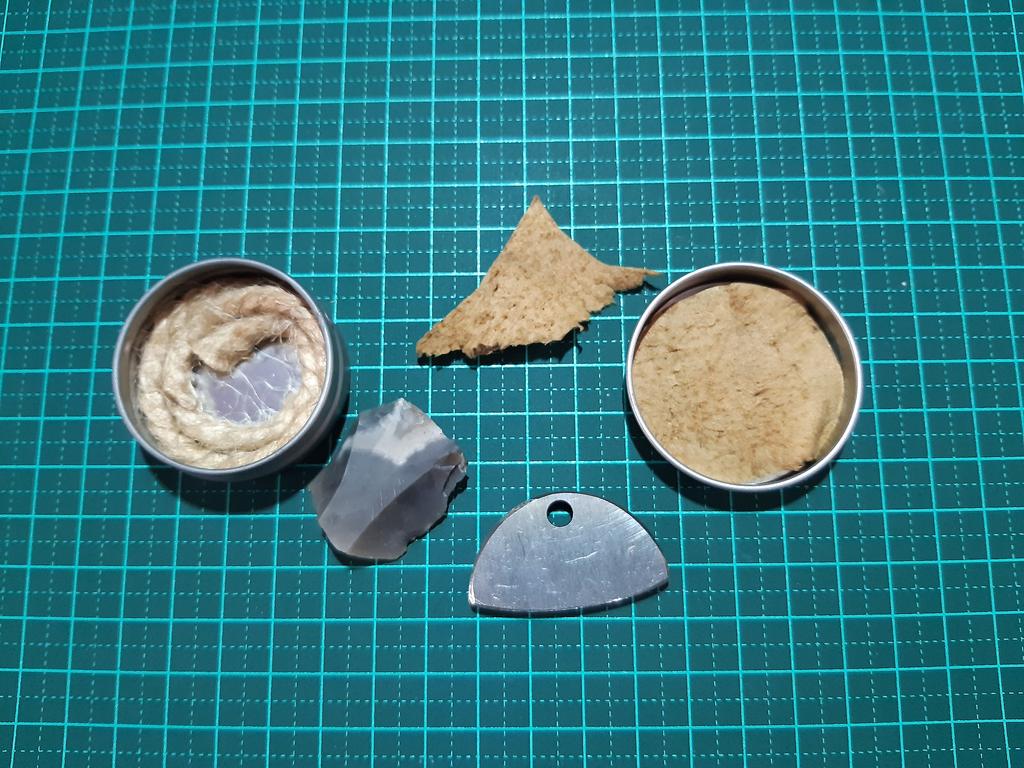 Scaled Dragon Striker, despite the listing saying it was to be supplied with flint mine did not come with any. By D & B Primitive ForgeWorks, an American forge. 56 days in transit, and this was an expensive striker, $100 Aussie ($30 in postage) so as you can imagine I was disappointed, no flint, 2 months transit and I tried contacting him several times and communications were spotty to say the least.

Thankfully it sparks well and showers sparks. This was another fun purchase and scratches my fantasy itch again. Building up the kit for it, going to make a large sami style pouch and add all the pictured sundries. Brass oval tin is its new home.

obviously made from an old file, which is perfectly OK, they make a great striker. 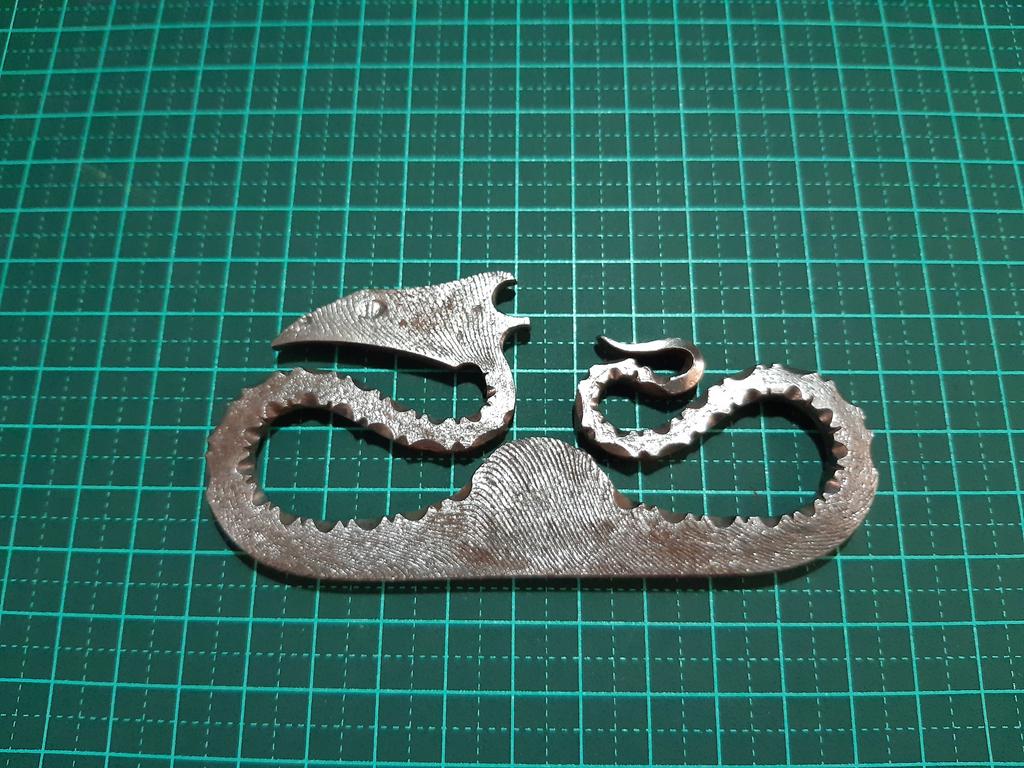 and the kit starting to come to together, flints are from my stores I have on hand 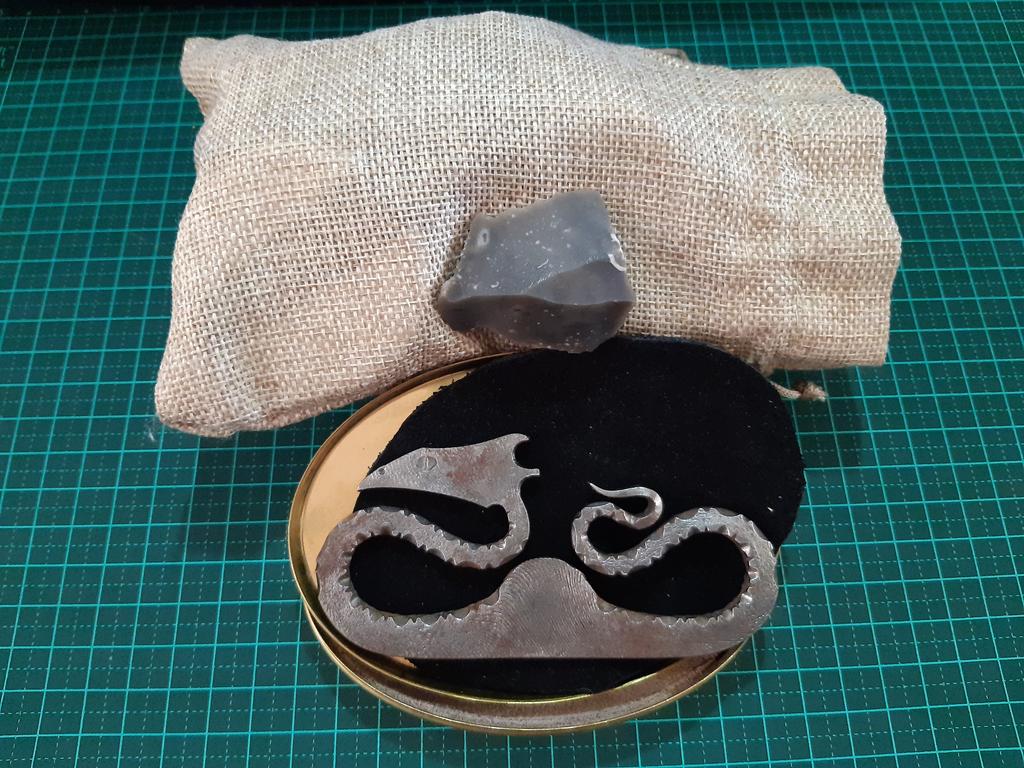 been a long wait on this one, Dreki kit arrived, ordered this one in March 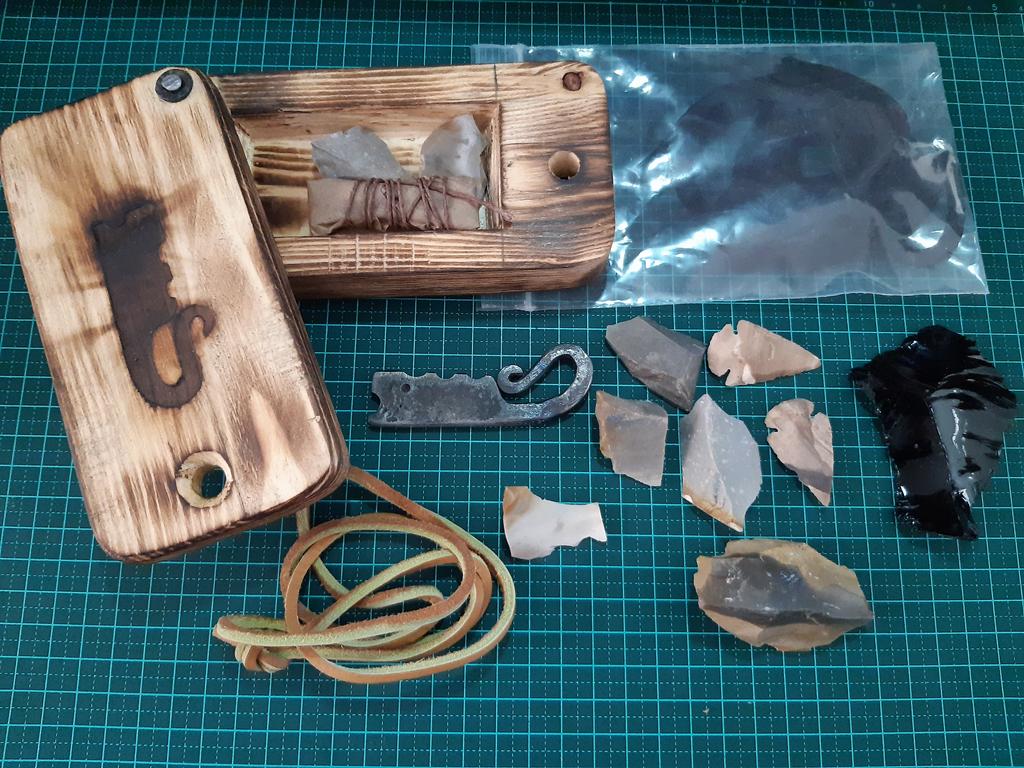 Viking "B" type striker from BeaverBushcraft, one more from them and then that's it for buying strikers I have all that I could ever want or need. 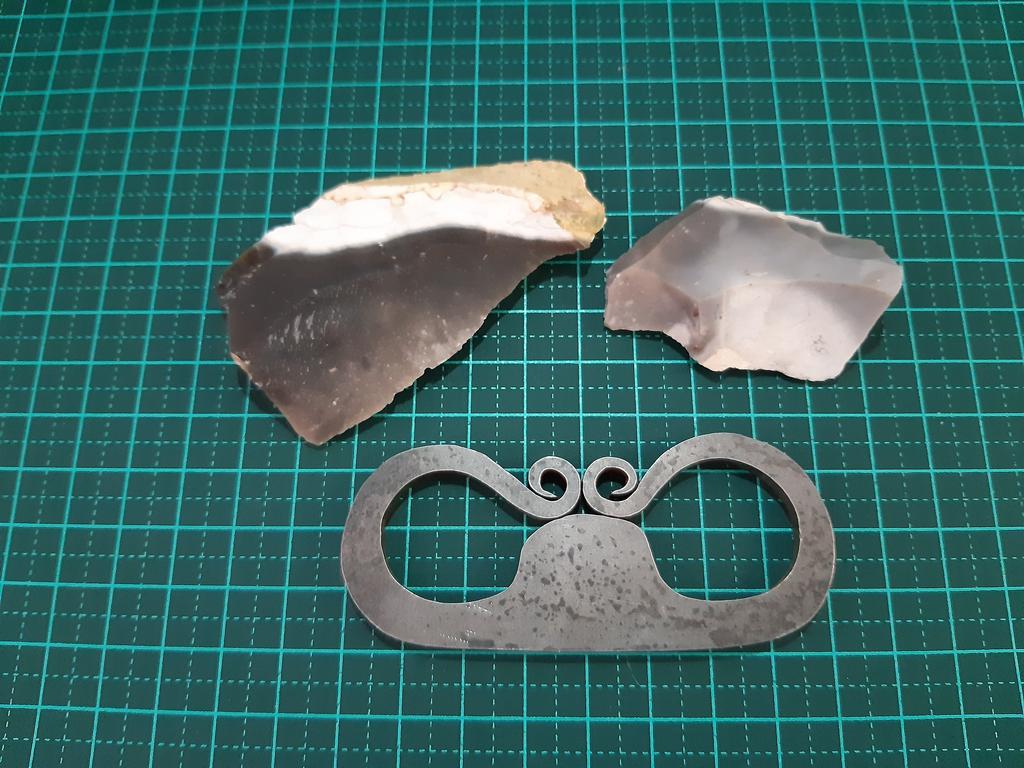 my 4 "B" type strikers and some flint I have on hand.

I love my B types, for me these are among the easiest to use and I find them so easy to get ember with them. 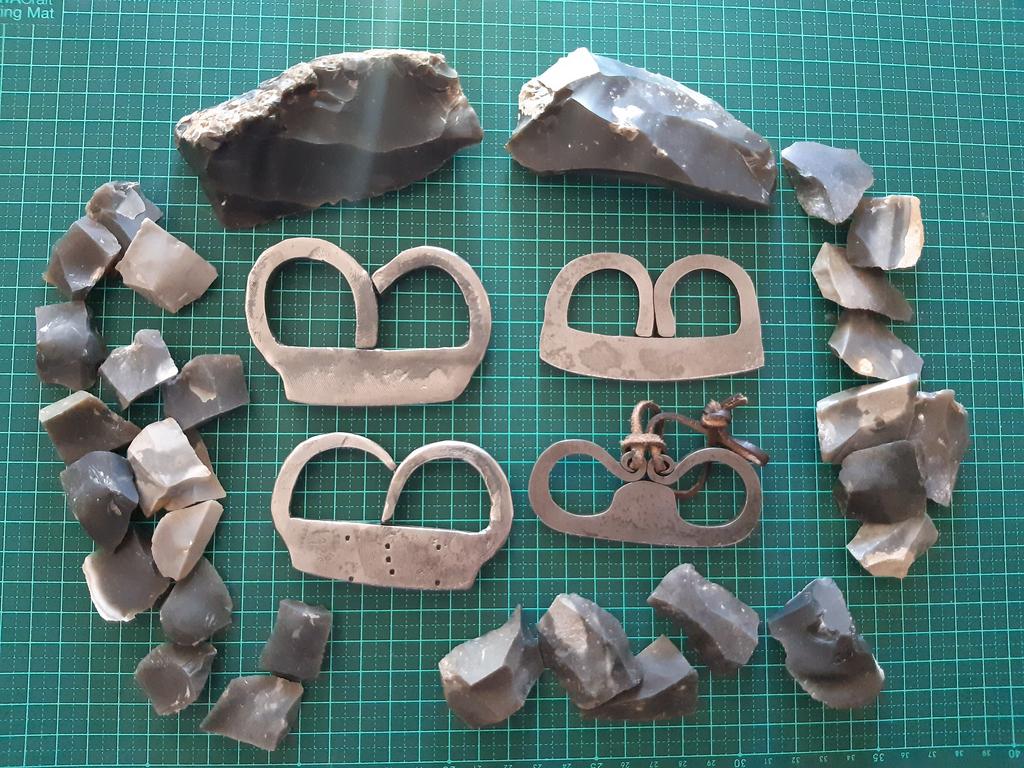 my latest and last from Beaver Bushcraft, the curly Viking medium striker, again Mark was super generous with flints sending 4 very nice sized pieces. I now have all the strikers I need from Beaver Bushcraft and unless I see something very special won't be getting any more. 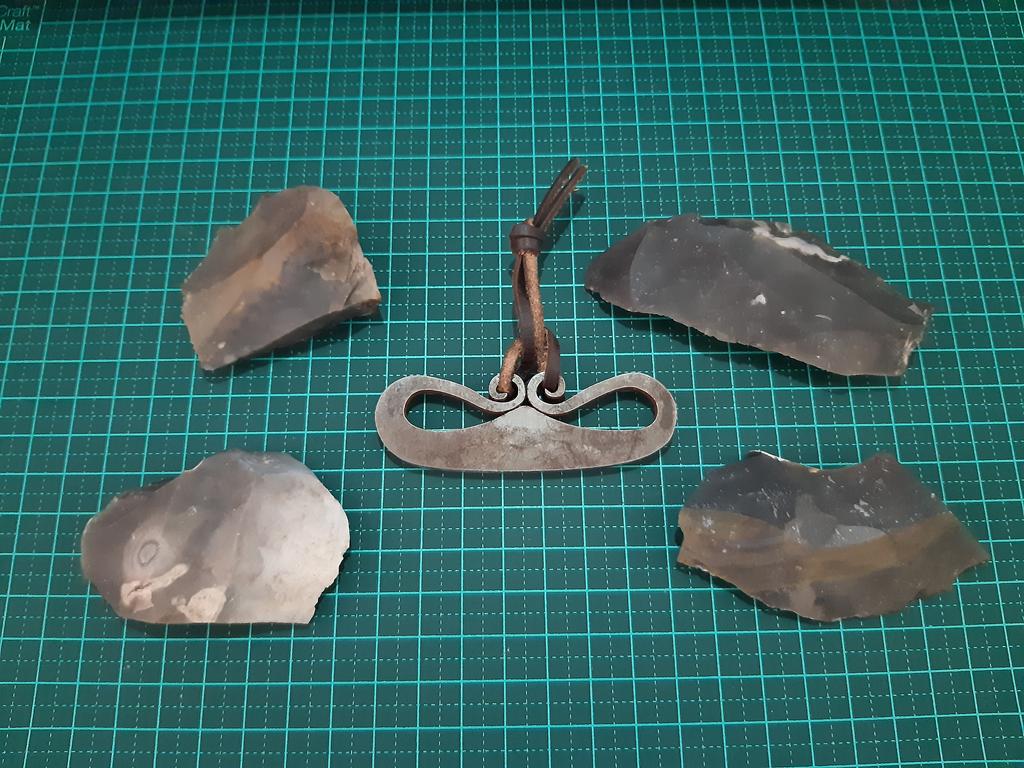 this one is yet to turn up, a custom from America, JF blacksmithing, R type just finished and Jeremy was kind enough to send me some pics of the finished striker. With this striker you got to choose the curl on the handle (I chose a double twist) and a stamp, chose ORION my YouTube channel name. First time I have ordered anything off Etsy.

Looking forward to seeing how it sparks. 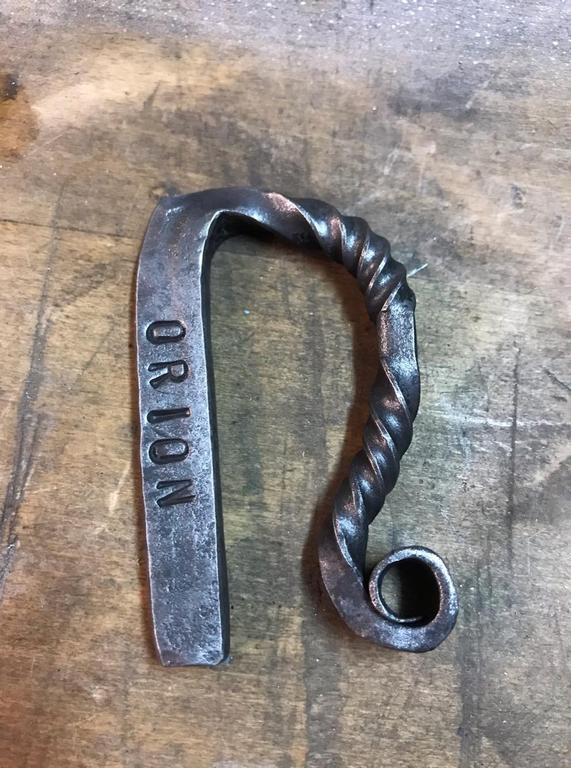 this one is also yet to turn up, another custom from America, this time from Metal Artisans on Ebay, an R type just finished and Levi was kind enough to send me some pics of the finished striker. With this striker you got to choose to have it stamped with your initials (which I did), striker supplied with three flints and flax. 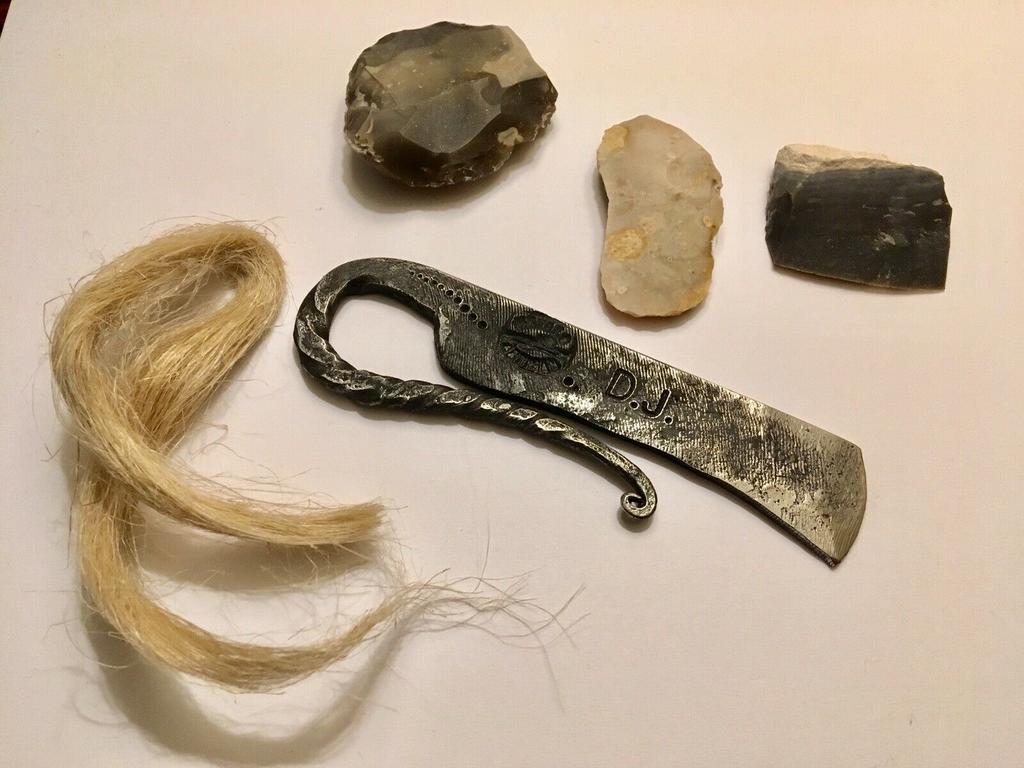 I am exploring R type strikers at the moment and have one more R type on order and then that about rounds out my collection. I liked these because they are customs (made to order) and personalized and unlike any strikers I own currently.

I have to say both of these are quite reasonably priced, both well under AUD$100 (including post) each which is from experience quite cheap for a custom striker.

bought some flints and 6 slow matches (proper ones that are treated) off Beaver Bushcraft and as always Mark was incredibly generous and doubled the order of flint, sending me 413.71g including 3 large pieces and the shards are also good sized.

The big surprise was the gift of a firesteel, a Viking humpback large with Celtic knots. I am so appreciative of this generous gift of a beautiful firesteel. 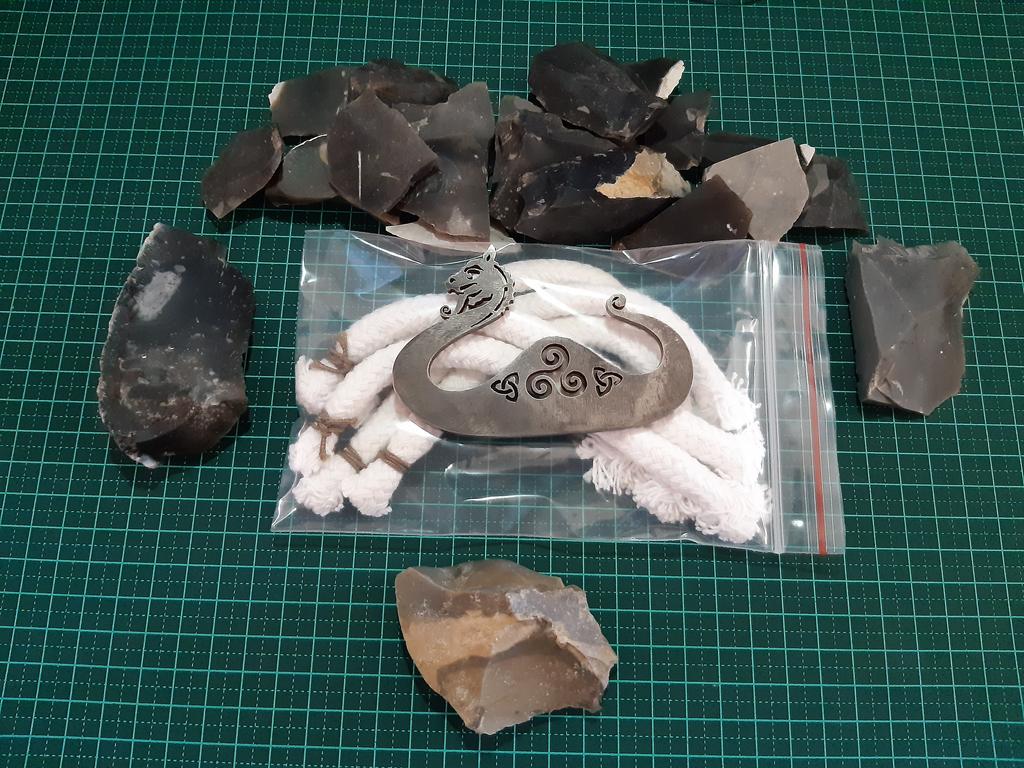