First - mods if I have posted this in the wrong place (oops!) feel free to move it.

I am a newcomer to this forum but I have already learned a lot, chatted with some great people and generally had a very friendly reception here. So I wanted to say thanks and maybe we can have some fun at the same time.

I am looking to give away one of two knives.

The winner can either keep and use it or give it to someone else who will use it.

The first is a brand new Swedish Fire Knife (black) made by Mora and incorporating a Light My Fire ferro rod. I picked two up on sale, use one and kept this one for just such a purpose as this. It's still in its packaging and screaming to get out and be used. It would be a great starter knife or a good backup or lighter use knife (bad pun intended). The second knife was hand made by a relatively new maker over in the US. The handles are micarta and the blade is ATS-34. The heat treat was done by Bos, which the knife gurus here will know as one of the best knife heat treating companies in the world. The maker was inexperienced so the grinding is a little rough. I have sharpened it and did a little test cutting in the process. Other than that it is unused. It comes with a basic kydex sheath but would no doubt appreciate being dressed in leather. This one would be great for anyone who wants to have something with a handmade feel. ATS-34 is a solid performing stainless steel so it would also be great for anyone in a wet or humid environment. I have to say I really like this knife.

Entry is open to anyone who is at least 18 years old. I will cover shipping in Australia. To enter, just post on this thread, state which of the two knives you would like, and include either:
- a photo of your bushcraft handiwork (either success or failure is good). Bonus points for food photos and anything that gets a laugh.
- a bushcraft or camping-related story or anecdote from personal experience.
- a scenery photo
- a joke
- or anything else which might bring a smile to someone's face.

I will let it run for a while (probably a couple of weeks ) before I pick a winner.

Yeah having some poorly timed technical issues with my image hosting site (imgur). There will be photos shortly. I hope
C

Photos added. Have at it!

Great comp, thanks for doing it can't wait to see everyone's posts!

Chris a very generous gesture - nice knives - and I hope they go to someone deserving.
This is not an entry ... I have plenty of sharp things ... just wanted to kick the thread along.
This is my tree planting buddy/helper Toby

Hi Chris, thanks for a generous and entertaining idea for the competition.

Both the knives look like great choices; as much as I'd love the Mora, I choose the second knife because I have a couple of similar Moras.

As a keen photographer there's a lot I had to choose from, but in the end I chose this video of myself with my son in law making damper, because it hits a few of the points that you asked for.

Awesome start guys. Thanks for getting involved.
That looks like a delicious damper Greatbloke. Glad you are teaching the importance of hand hygiene

Very generous mate! I won't enter (got enough sharpies to keep me in strife) but I'll try muster up some pics.

Hi Chris, Great idea for a comp and a couple of great knives too. Many thanks

Hey Chris, thanks for a great comp idea man. This entry is for the second hand made knife, and will take the form of a little yarn I've got to share. About six months ago I went on a week long camp out with a group of me lads, not all of whom were so hot on the idea of forgoing modern conveniences in favour of "going bush". One such of my group members was very vocal about his distaste for camping all week long, and was pretty pumped in his own way to get out of dodge so to speak. So Friday morning came around, with me, another mate and this particular character, let's call him Alec all bunking in a tent together on Thursday night. About 0530 on Friday morning I hear the tent inner unzip, no big deal I figure, Alec probably just needs to take a whiz. Then his kit under the fly starts rustling around, no biggie, he probably wants a torch or some such out of his bag. But the fly doesn't unzip, and his kit doesn't stop rustling. Now I'm starting to worry, he could be doing anything, as I said, he's a bit of an oddball. And then his kit stops rustling, and the fly unzips and rezips. I'm still on guard now, but I'm not forsaking the warmness of my bedroll to investigate his comings and goings. And then I notice that his bedroll is gone. Oh no. And then the tent inner falls in on top of me and its other occupant. After much shouting, entanglement, unzipping, and general confusion, we eventually make it out into the early sun rays of a bright Friday from the canvas jaws of our newly-pole-less-tent. As it turns out, Alec was so pumped at the prospect of beating his retreat out from inna-woods and back to civilisation, that he decided to streamline the packing up process, by taking the poles out of the tent after he had his stuff out of it, unfortunately forgetting its two other occupants in the process.
Hopefully this story gives you lads as much of a kick reading as it does me re-telling.
Aidan
C

remember-the-mount-bread said:
Hey Chris, thanks for a great comp idea man. This entry is for the second hand made knife, and will take the form of a little yarn I've got to share.
....
Hopefully this story gives you lads as much of a kick reading as it does me re-telling.
Aidan
Click to expand...

HA! That is kind of hilarious. I suspect most people have a friend like that 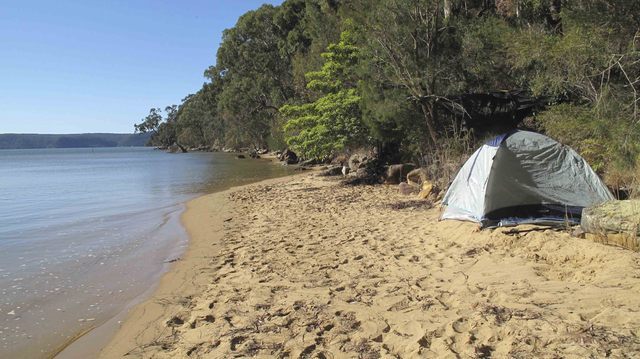 That's a really generous gesture Chris! Looking forward to seeing all of the pics.
R

I suspect so, it takes all sorts I suppose :linguino:
Glad to hear you enjoyed the yarn man!! :risatonaD:
Cheers, Aidan

Oooohh that is VERY nice. I'm bloody jealous because I am stuck behind a desk staring at spreadsheets on a computer.

chris larrikin said:
Oooohh that is VERY nice. I'm bloody jealous because I am stuck behind a desk staring at spreadsheets on a computer.
Click to expand...

Sorry to here that mate,thanks for the comp!! I am in it to win it as they say,one more bushcrafty pic..

What a beaut comp. That custom is a winner for sure !

I haven't been able to get far, but I did go for a walk by the river, down by the old Aplhington Swimming Pool:

I setup on a small sandbank. No fires, but I built a small metho stove specially for this trip ! (This is my favourite design.)

The Yarra at this point is not potable, its "inner city", so I bought water with me; plus some salt and an egg (which I packed in a small tub with some newspaper):

I put the egg in the water when it was cold. Then boiled it for 10 minutes (ie hard boiled. 3 - 5 minutes will give a soft boiled egg if you prefer it that way):

I didn't have an egg cup, so picked some tall grasses and tied a simple overhand knot to form a "nest" of sorts. I used that as an egg cup to hold and shell the hot egg: