Hello Guys,
I've already done a search and google but came up with incomplete information.

My question is multi fold.

1. Where/how easy is it to find a "rock" that will throw a spark off a carbon steel blade in Victoria ?
2. How hard is it for natural tinder to catch said spark ? (so not using char cloth or any other non natural material)

From my search, I gather that there is Flint in Mt. Gambier but not much elsewhere in Australia.
But what about Chert and Quartz?

I guess I just want a general discussion on this topic
Tips on finding and identifying (by eye and not just the smash it and see how it breaks) would also be lovely !

Flint is "only" in the SW coastal corner of Vic.

Quartz is almost everywhere in Vic !
There is a lot around most of the gold mining areas, and because of the mining it is often exposed.
A walk through the bush, paying attention to creek beds (or gullies), and you should find some.

Quarts is (usually) a hard, white rock and can easily be picked by eye (once you know what you are looking for .....)

Which part of Vic are you in (or wanting to hunt in) ?
S

read through this thread

CLOO have you though of contacting your local Lapidary Club, these people are gem and rock collectors and may know of locations for your search or narrow down some locations for you. I did the same thing here in the Illawarra in the search for flint or similar conchoidal rock.

Its really a trial and error thing with which rocks work or not.
Some quartz works and some doesn't.
Here are a couple of pics of quartz for a start.

This one below is a pink quartzite, actually a stone blade/tool.

A sharp edge is required on the rock to strip metal off.
Make sure your carbon steel is hard enough to actually give off sparks too.
Last edited: May 30, 2013
C

Thanks for all the replies guys !

I'm just as interested as to how commonly available this stuff is as I am with playing with it.
Just from a "if i have nothing on me but my knife, can I start a fire" point of view.

However I suppose the best way to learn recognising them is to go get some and become accustomed to it.

My main reason in asking was because I was considering a Carbon Steel Knife over a SS.
If the reply was "There's non of that stuff here", then I would have just gone with the SS.

Aussie123 said:
Flint is "only" in the SW coastal corner of Vic.

Quartz is almost everywhere in Vic !
There is a lot around most of the gold mining areas, and because of the mining it is often exposed.
A walk through the bush, paying attention to creek beds (or gullies), and you should find some.

Quarts is (usually) a hard, white rock and can easily be picked by eye (once you know what you are looking for .....)

Which part of Vic are you in (or wanting to hunt in) ?
Click to expand...

I live in the south east suburbs (around Caulfiled).
I wouldn't call myself a hunter yet, only some one who has a large interest in it.
No gun License, no land, no friends or family that I know whom are interested etc. means I don't get much exposure.
I have been hunting in the Sea Spray area quite a few times for rabbits and foxes (my Ex's family who I don't speak to anymore ). And have hunted wild boar in Malaysia and gone bat culling in Malaysia (Extended family own farms in Malaysia). All good fun.

I mostly just go do walks in state/national parks that have tracks at the moment.

It is only as of recently that I am trying to take a more active approach to learning/meeting/talking to people. Hence making an account on the forum

Port McDonnell, Eight Mile Creek Road, along the beach, tonnes of chert/flint to play with.
http://bushcraftoz.com/forums/showthread.php?1389-flint-and-steel-tips&p=50751&viewfull=1#post50751

I know I am resurrecting this thread but I think it is good to bump it for anyone interested.

I have a fair bit of experience now trying to source flint in Australia for flint and steel use.

To buy it, RockyInstincts is (AFAIK) the only source of Aussie flint, the cost is $12/kg+post (which adds up as rock is heavy to post, I bought 4kgs recently total cost was $72)
You can buy flint/chert from overseas but the cost is prohibitive (as I said rock is heavy) I have paid $70 for 1lb of flint posted from America. I have never been able to get good rates for flint from overseas sellers and I've tried from almost every place that sells large quantities of flint.

Finding it, Australia only really has one place that flint occurs in quantity and that is Mt Gambia (as mentioned above) South Australia (GTVi is on the money)
I have seen people finding flint on beaches (on youtube) in other areas but I am very sceptical about that, I just don't think it is very common to be able to do it.

While Australia might be flint poor we are lucky to have abundant deposited of viable stones for 'flint' and steel use, if you study the Moh's hardness scale you will see all you need is a stone in the same hardness range as flint (so 7-8 Moh's) and that actually covers a heap of different types of stones including agate, jasper, petrified wood, chalcedony and quartz/quartzite.

Quartz/quartzite is probably the most abundant stone you will be able to find, it is everywhere from what I have seen and it works fine for 'flint' and steel use. I have at least 150kgs of quartzite on hand at home and use it a lot and it is a good stone for sparking.
Once you start to know what you are looking for you will be able to spot quartzite pretty easily and will start to see it everywhere. A single medium-sized boulder (one a man can lift with a bit of effort) will give you a heap of rock once it is spalled.

Petrified wood is also another good sparking stone, almost every piece I have found I could drive sparks off and there are several places you can go and harvest petrified wood (Chinchilla Qld as an example)

Jasper, again another very good sparking stone, this one is a little harder to get as it often is gem-quality (so you pay top dollar for small quantities of it, especially the mookaite variety) but you can be lucky. I got 3.5kg's lot off a lapidary sell off for $32 and it is all some of the best-sparking stones I have ever tested. You can find it in several places, there is a river in NSW renowned for its jasper deposits, as well as in Western Australia.

I was lucky enough to have that quartzite in boulder form in my backyard (as decorative rocks) so I spalled most of it. I use it now for my nightly practice and if you watch any of my videos you will notice the buckets of quartzite I have sitting around. 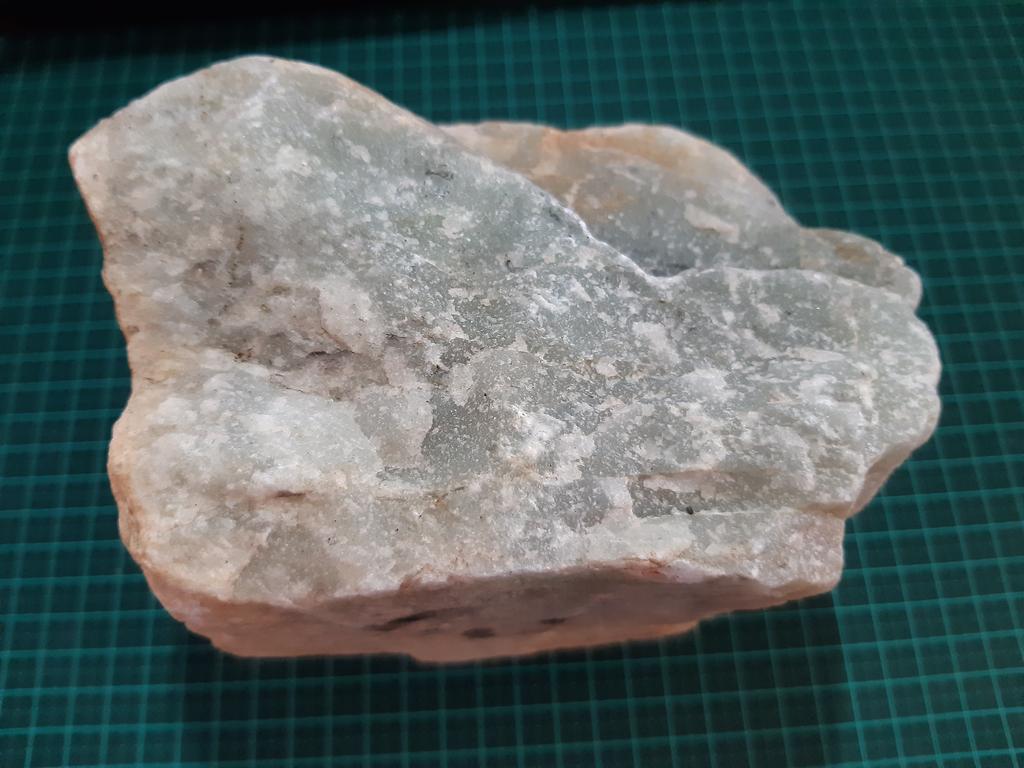 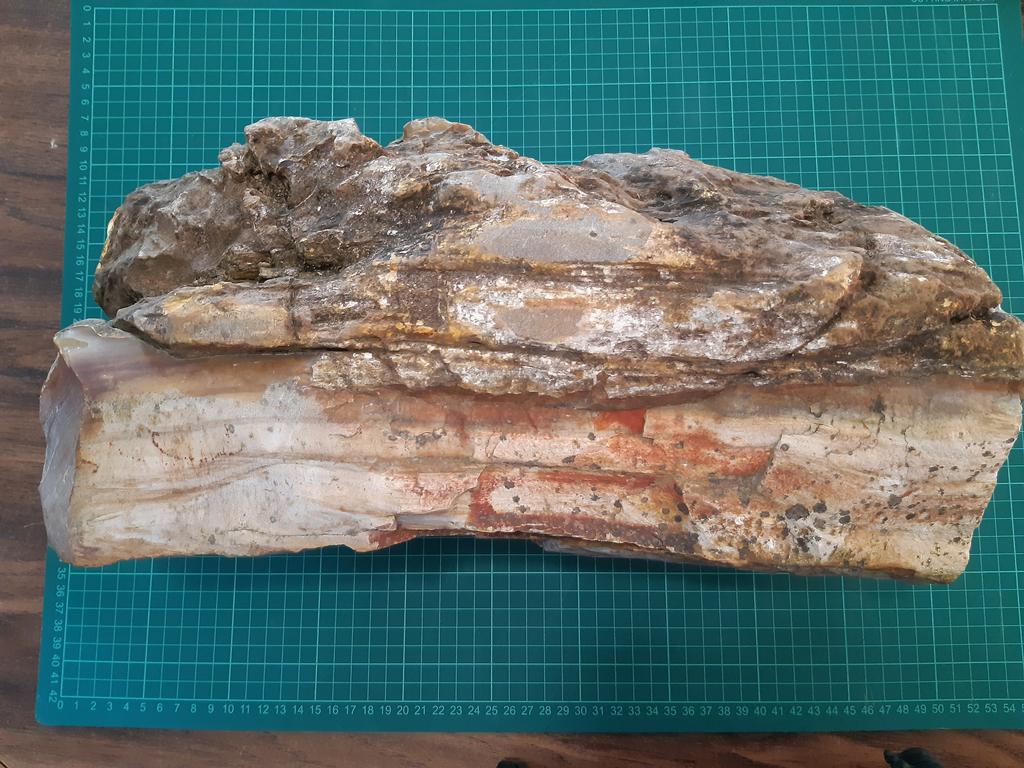 and more petrified wood from Chinchillia 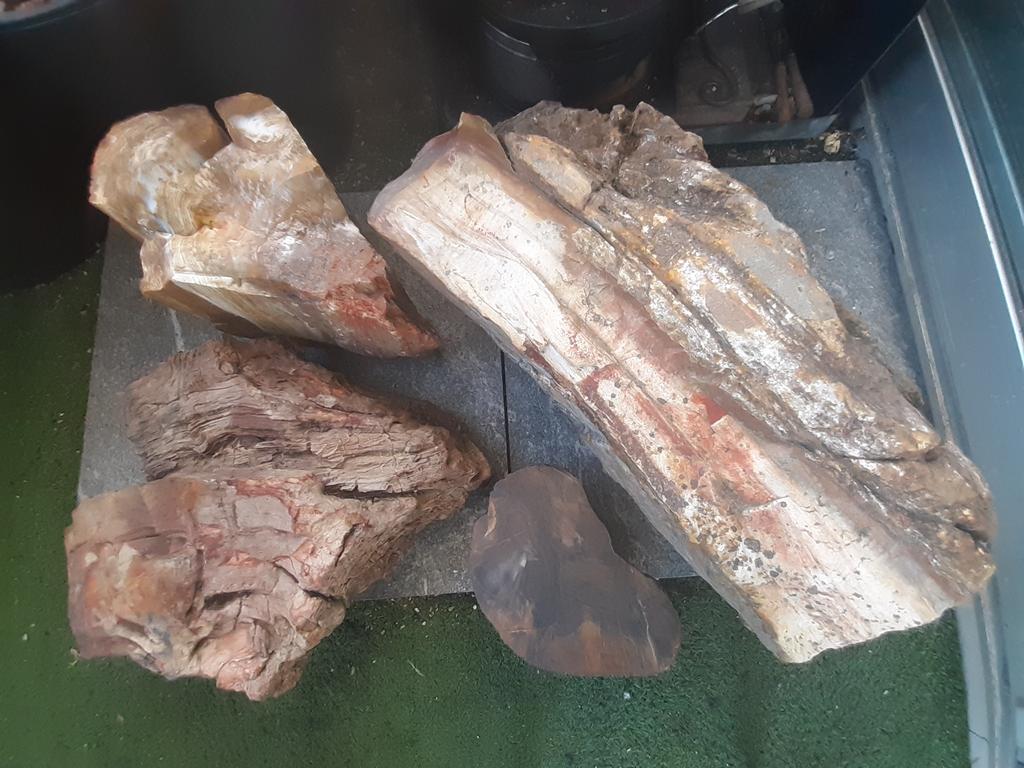 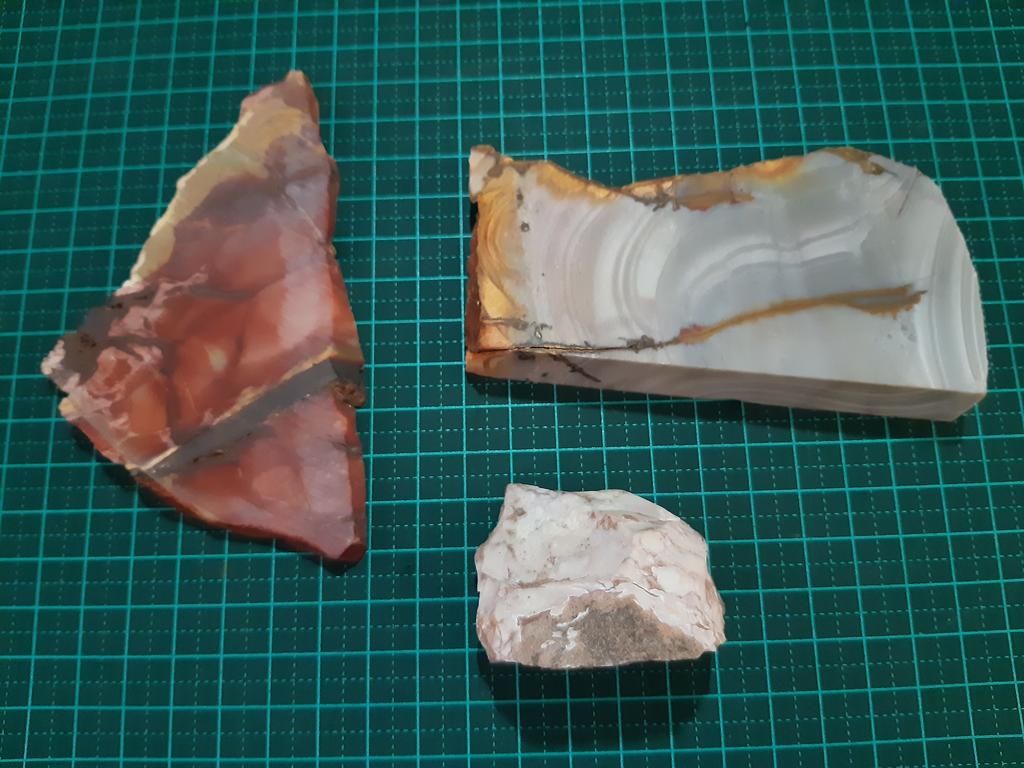 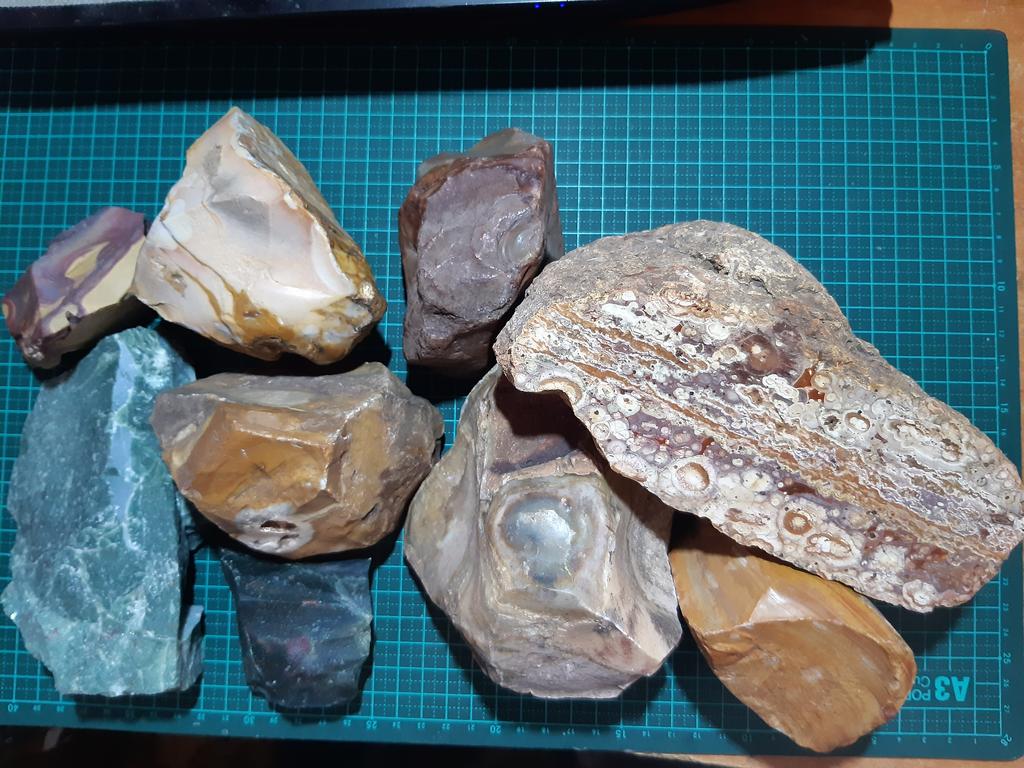 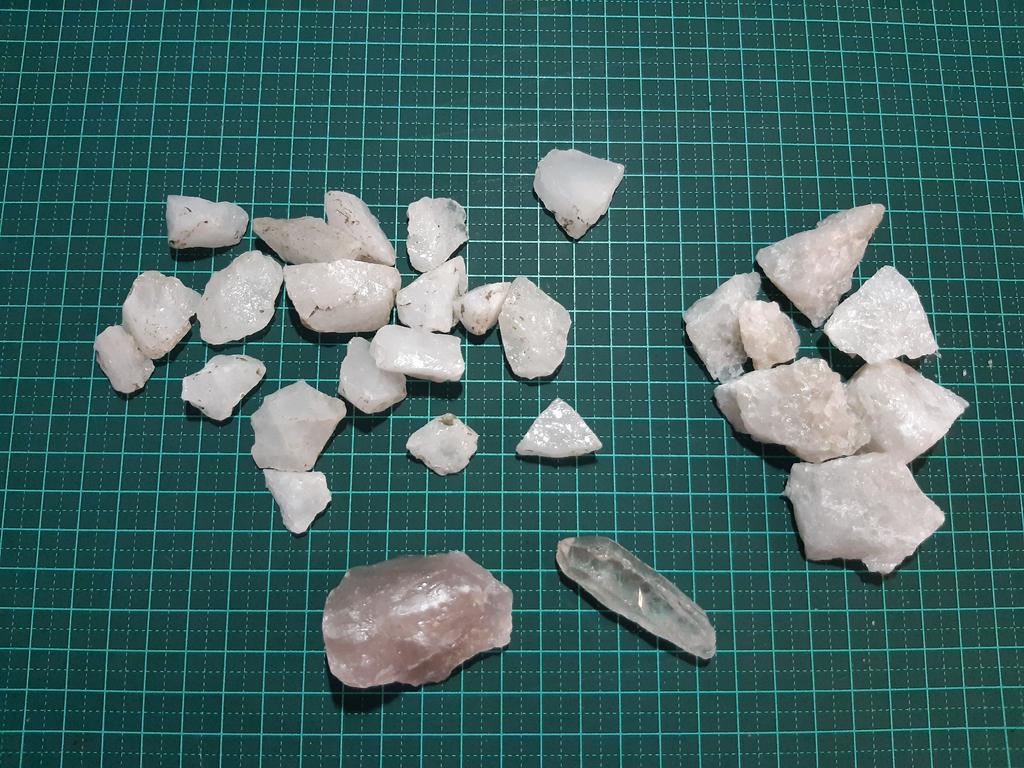 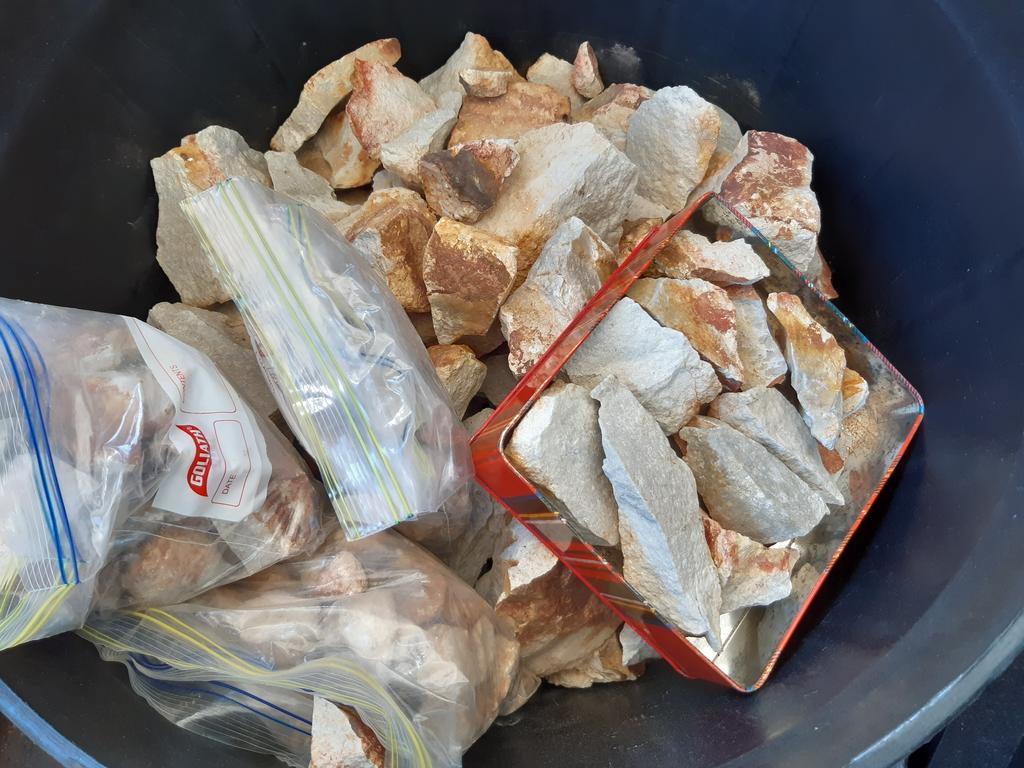 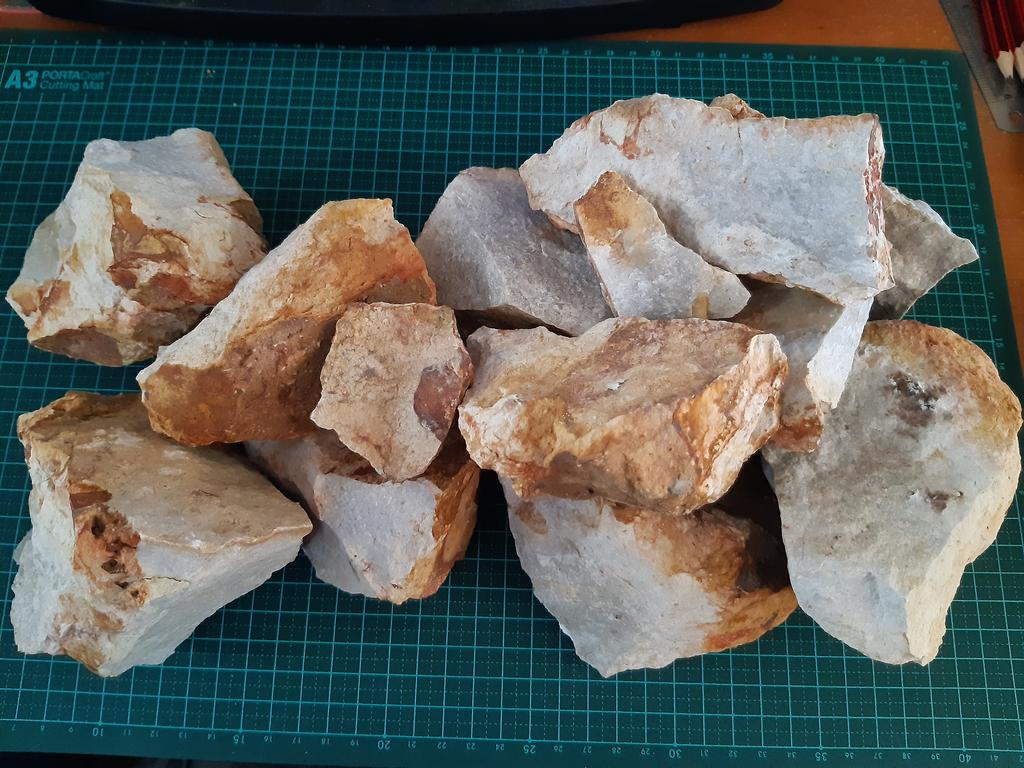 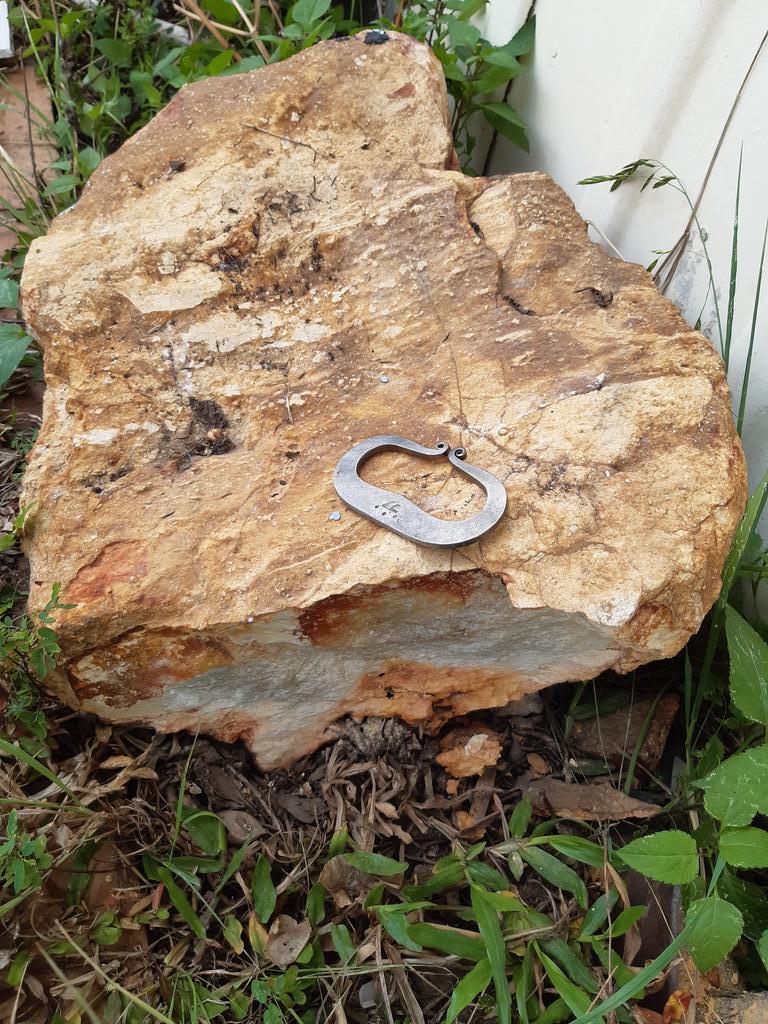 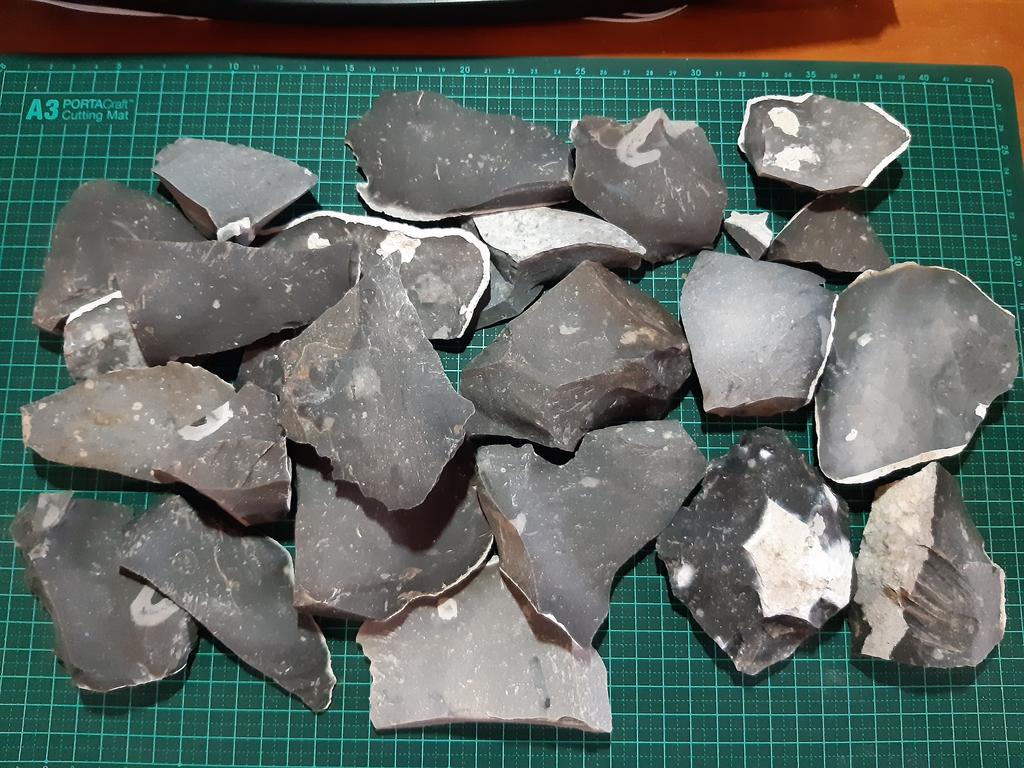 Have you tried silcrete? I have some at home and will give it a test drive later today and get back to you. I have quite a range of different kinds as a giift from an anthropologist who’d done work on stone for stone tool making as well as stuff I have collected. It can be incredibly hard, flakes well with sharp edges and is very common across Australia.

will get back to you later today.

I have not, it does have the right hardness (mohs 5-6) so should throw sparks, as always it's about whether you can find a decent sharp edge to drive off.
K

i tried a piece of silcrete that I have and compared it to a piece of flint from Port McDonnell in SA. The silcrete was easily as good at sprking up some char cloth as the flint.

looking at the Moh's silcrete is a little softer than flint so I surmise it would not be as durable and would blunt quicker. I find quartzite to be like this, and it is as hard as flint.

Thanks for doing this mate, another tool in the toobox.

I was disappointed the other day, I finally found a landscaping place selling petrified wood for reasonable prices, $150 for a pallet (around 28 good size pieces/pallet) but I failed to get any of it to spark adequately, some sparked occasionally but not enough to justify the purchase. That was the first time I failed on petrified wood. Just shows that it all depends on what minerals go into the mix when the rock forms and how it forms.
K

I have about 15 to 20 different kinds of silcrete and they range from fairly soft to some of the hardest rock I have ever tried to work with.

The sample I used was not the hardest I have.

I would kill for more of these stones, at top Muckadilla petrified wood, bottom jasper, I am pretty sure is Mookaite from WA. My best stones by far apart from Norfolk flint. 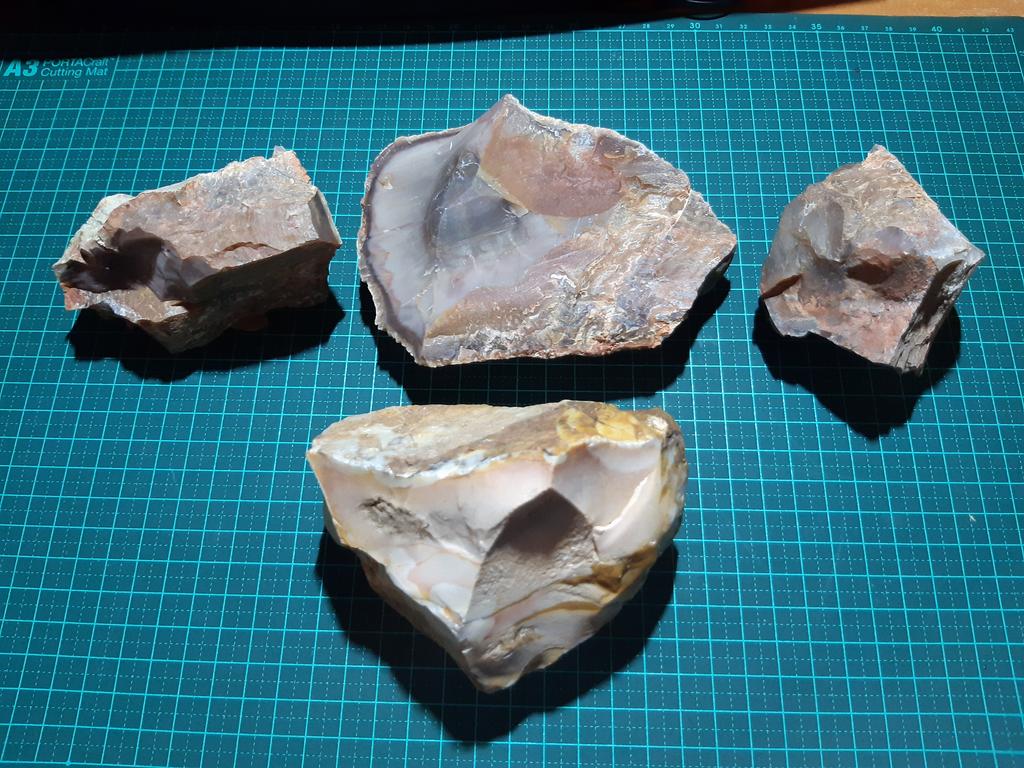